Arts & Features » Trust Me, Trump’s Inauguration was a Mess [Video] 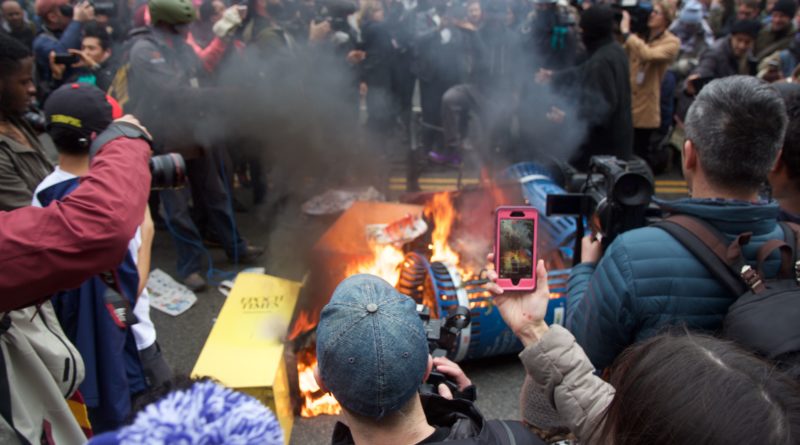 Every four years, the United States throws a massive party near the steps of the Capitol Building. At each inauguration, Americans travel from far and wide to welcome the new president of the United States and celebrate the peaceful transfer of power.

I grew up just outside of Washington, D.C. so it was never hard for me to travel into the city for an inauguration. In 2008, I was lucky enough to witness President Obama take office surrounded by 1.8 million people. I was also present at Obama’s somewhat smaller 2012 inauguration. Both of these events were absolutely jubilant. I was never a supporter of the President so I can’t say I shared the same joy felt by those around me, but even I wasn’t immune to the electric atmosphere of positivity.

This year, I continued my tradition of attending inaugurations by traveling to D.C. to witness President Trump take the oath of office. The event was unlike anything I expected, let alone similar to the Obama inaugurations. In the course of four hours, I observed both a nearly silent inauguration crowd and the terrifying boom of concussion grenades.

On the morning of the inauguration, I woke up at 8 AM and hopped on the Metro to get into DC. I instantaneously recognized that the crowds were smaller than nearly any normal Friday rush hour that I’d experienced. I was a bit surprised but I brushed it off.

After a short twenty-minute subway ride I emerged into the streets of DC and immediately walked past a crowd of one hundred protesters blocking the entrance to the parade route. As I made my way towards the Mall where the swearing in was to take place, I passed dozens of people carrying signs with phrases like “Not My President”, “Golden Rule Not Golden Showers”, and the ever imaginative “Fuck Trump!” The opposition was out in force. I knew at that moment the day wouldn’t be a normal one.

When I finally worked my way through tight security into the viewing area, protest signs and banners were mostly absent but there was a deep uneasiness in the air. One group of teens in red “Make America Great Again” hats loudly attempted to start a USA chant but no one joined. A group of college students stood behind me with a look of absolute disbelief and dread on their faces. One girl began crying during Trump’s speech. The only comic relief came from the marijuana activists in front of me who had somehow smuggled a joint through security. The crowd was split 50/50 with me stuck in the middle.

The eeriest part of my experience on the Mall was the silence. I fully expected there to be a mix of Trump supporters and protesters, but I figured the Trump supporters would gloat and the protesters would yell insults in return. Neither of those things happened. Each side seemed absolutely terrified of angering the other.

To add to the dour mood, the sky was a flat dreary gray.

As Trump concluded his speech describing the “carnage” of American life, I decided to leave. The inauguration was too depressing and exhausting for me.

It was at this point that I checked Twitter for the first time that day. Interspersed between tweets from pundits analyzing Trump’s populist speech, I saw apparent reports of smashed windows three blocks away and police arresting protesters a few blocks from that. I had my camera, my phone, and plenty of curiosity so I decided to play journalist for the rest of the day.

As I walked through the city, the first sight I came upon was a line of police blocking a road. On the ground in front of them was a pile of fliers from the Industrial Workers of the World, an international union with ties to socialism and anarchism.

I immediately ran around the block to get to the other side of the police line. Protesters were deliberately blocking traffic on one of the largest roads in DC in a standoff with police. Somewhat ironically this took place on the edge a park with a statue of Edmund Burke, the famous English conservative who criticized French revolutionaries for their radicalism.

After a few minutes of observing the standoff, I walked another block only to stumble upon thousands and thousands of people marching down New York Ave. Unlike the groups of scattered protesters that I had seen before Trump’s speech, these marchers were organized. They carried banners denouncing white supremacy and shouted the classic chant of Trump protesters everywhere, “No Trump, No KKK, No Fascist USA!”

As they marched, I followed. We passed a string of smashed shops. One Starbucks had every single one of its windows destroyed and a Bank of America sat empty with glass on the floor and its doors ajar. Apparently, some of the vandals shared the same anti-globalist sentiments as the man they were protesting.

As I worked my way through the crowded streets of Washington, taxis became caught up in the march, honking as they tried to back away from the swarming crowds. At one point, protesters locked in a military transport with soldiers inside.

It was at that moment that I started hearing sharp booms in the distance. The thought of a terrorist attack leapt to my mind and I immediately went to Twitter to find out what was happening. I heard a shout from a protester that the police had set up a roadblock three blocks away. I’m an idiot. I ran straight there.

A crowd had gathered in front of a line of police with riot shields. Newspaper boxes were strewn across the road and a number of 20-something people dressed in black with bandannas, goggles, and gas masks were scrambling from one side of the street to the other. I saw rocks in many of their hands. They had been throwing them at the line of police.

Then, out of nowhere, I saw a flash of light in the crowd followed by a boom that rattled windows and sent shockwaves through the air. The police had thrown a concussion grenade into the crowd.

At first, the demonstrators remained where they were, absolutely spooked and unsure of what to make about what had just occurred. Then another concussion grenade exploded and a practical stampede started. One protester tripped and fell through a low fence, another collapsed to the sidewalk after being bruised by a blast. I stumbled backward with the rest of the crowd as the police advanced.

It turns out that riot police are both terrifying and incredibly effective at their job. As they moved forward they grabbed protesters and arrested them. I had no desire to end up with my hands in zip ties and an arrest record so I jogged a block west for safety.

By this point, what once was a nonviolent protest had gotten a bit out of control. The vast majority of the protesters I saw that day were perfectly normal people who were legitimately fed up with Trump. They wanted to voice their anger which they did by peacefully marching. But unlike the Women’s March that occurred the next day, the inauguration protests included a small group of people who either wanted to express their outrage violently or use the moment as an excuse to sow chaos.

A block from the police line, rioters (because that’s what they were at this point) had torn trashcans and benches from their moorings and lit them on fire in the middle of a road. One protester with a megaphone yelled at men in black tearing a bus sign from the ground, “Stop! You’re proving their point!” A limousine was smashed on the side of the road and a demonstrator yelled poetry about “the system” from its roof. Later that night, watching CNN with my family, I saw that same limousine on fire, burning to the ground. It turns out it was owned by a Muslim immigrant.

At this point, I had had enough. I turned, left the chaos, and walked to the Metro. I just about collapsed when I finally arrived home and thanked god that one of the strangest days of my life had come to an end.

What began as a day of awkward silences, orderly queues for security, and a speech about law and order ended with an explosion of noise, chaos, and misplaced energy. I saw two sides of America, one waiting with fingers crossed and the other already planning its resistance.

2 thoughts on “Trust Me, Trump’s Inauguration was a Mess [Video]”