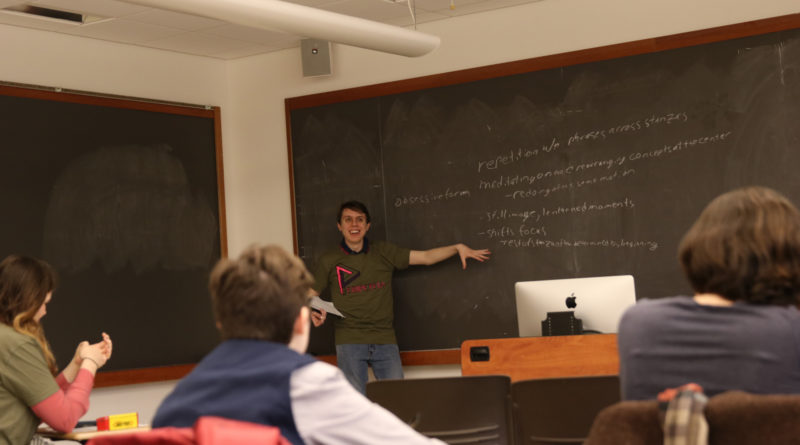 Around Again: Playing with Sestinas, a Peripeteia workshop led by Tristan Beiter ’19, served as an hour-long introduction to the sestina, Beiter’s self-proclaimed favorite verse form. The event began with a collective reading aloud of three sestinas: Elizabeth Bishop’s “Sestina,” Agha Shahid Ali’s “The Floating Post Office,” and Julia Alvarez’s “Bilingual Sestina,” the last of which is the poem that first introduced Beiter to the verse form.
“I was in speech and debate in high school and a really good friend of mine was doing a collection of poetry by Julia Alvarez,” explained Beiter.
Beiter then asked the class what they had noticed about the structure of the sestinas. Some of the immediate answers from the ten attendees were that they consisted of six stanzas of six lines plus a seventh stanza of three lines, or that there was no set rhyme or meter to the poems. But the key characteristic, Beiter said, was that the last word of every line in the first stanza repeated itself as the last word of a line — not, however, the same line as the first stanza — throughout the rest of the poem. In addition, there was a method to determine where each last word was supposed to be repeated. This concept was clarified during the course in the form of a diagram that Beiter drew, demonstrating a clear pattern in which the last word of the fifth line of the first stanza becomes the last word of the third line in the second, and so forth.
“I like [verse forms] that play with repetition and with circularity … I like it for its sort of creative power in the effects you can get out of the repetition, and also I just think they’re fun to write [and read],” said Beiter.

This obsessive circular component of the form, with its septuple use of the same six last words that go “around again,” was among the technical aspects of the verse form that were then brought up by participants. Others included the tension between the form and content of the sestinas, the shifting of focus as the order of the last words in each stanza changed, and the lengthening of time into still images with the repetition of the aforementioned last words. Beiter maintained a banter with the participants as he expanded upon each aspect, listing the main points on the board.
“Tristan taught his [workshop] a lot more like a class than I did with mine,” said Rachel Davis ’19 of Beiter’s teaching style.
Davis, who led a Peripeteia workshop of her own, added, “Tristan had a lot more of the traditional back and forth with the professor, which I think he really excels at.”
According to Davis, she and Beiter are close friends who are both majoring in English and aspiring to pursue careers in teaching.
“It was a sort of neat, little flash forward into the future where we’re both teaching undergraduate at Swarthmore College 2.0,” Davis joked about the experience.
Tymoteusz Chrzanowski ’19 also commented on Beiter’s workshop in relation to his own, “Introductory Knitting.”
“Both were about teaching a very specific skill … There’s a little bit of a difference in that there’s a lot more theory and ideas that go into poetry than knitting, or, at least, how it’s taught. I could commend Tristan on doing it,” he said.
Beiter himself found the relatively low-stakes environment of a short, one-time class full of peers helpful as an introductory teaching experience.
“It’s good practice for being up in front of the classroom,” he said.

The workshop culminated in the participants’ attempt to write a sestina of their own based on six last words that were suggested by their peers: “crash,” “milk,” “ring,” “collar,” “saucer” and “purrs.” When time was up, some of the participants chose to share their sestinas with the rest of the class.
“I was really excited and it was fun … to see all the different directions everyone went [with their sestinas],” commented Beiter.
The final results were a range of strong, literal imagery featuring a cat character and some more abstract takes on the words.
“It was a lot of fun. I didn’t really know anything about sestinas and I’m not really big into poetry, it’s not something I’m in contact with a lot and so it was really interesting,” Emma Mogavero ’20 said about the experience as a whole.
She continued, “I’m really glad [Peripeteia is] something that exists at Swarthmore … It just seems like a natural thing to come out of the school.”
“I think it’s a good opportunity … Peripeteia’s a thing where you can just share some of the more eclectic knowledge you have,” agreed Chrzanowski.
When asked about the possibility of leading another Peripeteia workshop in the future, Beiter maintained that he would if he could come up with a subject that was as engaging to him as the sestinas.
“It could be quite enjoyable to try … to pick a topic and then have people try to write a sonnet and a villanelle and a pantoum about it and see how the form affects meaning,” he said.
However, he admitted that this idea would be difficult to execute as participants would need to already be familiar with verse form.