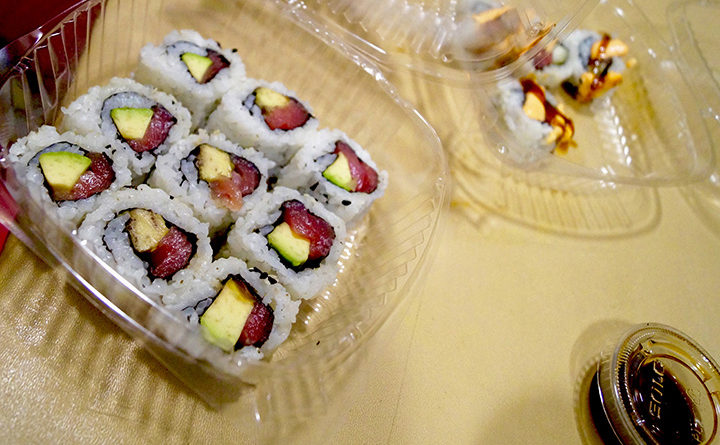 Late Nite, a sushi and dumpling delivery business, opened its doors for the first time on Thursday, October 27th. The business, started by Henry Han ’20 and Natasha Markov-Riss ’20, works to serve food at times when other places on campus are not open.
“We saw a need for food late at night, and our business was meant to fill that need. We thought the one thing that would set us apart from other food services on campus would be our ability to deliver,” Markov-Riss said.
So far, Late Nite has been in operation for four nights, and has received at least 40 orders each night.
“We make it a big point to serve our own food. We’ve heard of some businesses before who didn’t serve their own food and got in trouble, so we make it a point to not to,” Han said.
Indeed, the business gets its food from verified distributors, which Han stressed as important.
“In the nature of sushi, the fresher it is, the safer it is, the better it’s going to taste … Sushi is like an energy food,” Han said.
The opening of the Late Nite has led to considerations of requirements for student businesses on campus. According to Andre Barclay, assistant director of student activities, leadership, and greek life, requirements have not been made explicit.
“I’ve been trying to look into [requirements for student businesses], and I think questions surrounding that have been kind of spurred by the start of Late Nite, but right now, it doesn’t seem like there’s anything specific,” Barclay said. However, he believes it is a good idea to “get incorporated.”
Late Nite is in the process of obtaining a business license from Legalzoom LLC, a process that takes about six to eight weeks.
“We are in the process of forming an LLC, which includes a business license, which protects personal assets if the company gets sued. We also have obtained commercial insurance,” Markov-Riss said.
Eventually, Late Nite hopes to be a part of Swarthmore’s OneCard program, and met with the OneCard office before opening in October.
“We told the OneCard office this is our business plan, this is our business model, we get the food from a certified distributor, we have commercial insurance, we are a legitimate enterprise, and we want to get on the OneCard in the same capacity that any business in the Ville would be on the OneCard. They had to talk to their superiors, and we are having another meeting with them soon,” Markov-Riss said.
As the chief chef and the person who handles the food, Han has obtained a food-handler’s license by taking a class and being evaluated by a test.
“I’m extra careful because I’m serving raw food,” Han said.
Last year, “Quesedrop,” another student-run business, operated on campus to deliver quesadillas to students on campus. However, the head of the business graduated, and the business has not yet had the chance to re-establish itself this semester.
Late Nite hopes to be able to both establish itself with the school and continue to be accessible to students.
“We wanted to keep it simple, scalable, and sustainable,” Markov-Riss said.
As of right now, Late Nite is open on Thursday and Saturday nights, but hopes to expand both its hours and its food choices in the near future.