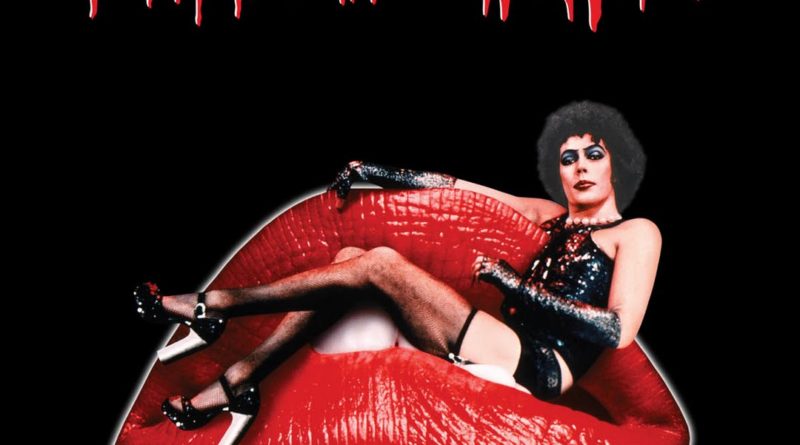 Last Halloween, I saw a group of Swatties dressed up as characters from The Rocky Horror Picture Show (Jim Sharman, 1975). Seeing them brought me back to when I first saw the film back when I was just starting high school.

I was first interested in seeing Rocky Horror when I saw Glee’s tribute episode, “The Rocky Horror Glee Show.” As I watched that episode, I did not understand any of the references that Glee was trying to make relating to the film. I did, however, enjoy the musical numbers.

It was not until I was fourteen that I saw Rocky Horror. I was visiting my aunt at that time and she had a copy of the film on DVD. I did not initially fall in love with the film because I was weirded out by its hybridity, melding comedy, musical, horror, and sci-fi elements together. I was also confused by the plot and writing and could not believe that the events in the film actually transpired. For example, the couple protagonist, Brad Majors (Brad Bostwick) and Janet Weiss (Susan Saradon), suddenly forsake their love for each other when they each have their own private and sexual encounter with Dr. Frank N. Furter (Tim Curry).

Eventually, I became a fan of the film because, as I mentioned before, I really enjoy the film’s musical numbers. It was my second viewing of the film that changed my thoughts because I realized why Rocky Horror is such a cult classic. The film features the most eccentric characters such as Dr. Frank N. Furter, a transvestite version of Dr. Frankenstein coming from the planet Transsexual of the galaxy Transylvania. There are campy performances across the cast because everyone brings a sense of theatricality and exaggeration when they deliver their lines. The plots are ludicrous like when Eddie (Meat Loaf) barges into the Frank N. Furter mansion, sings a song, and then dies. It is no wonder Rocky Horror has such a huge cult following because the film embraces difference by normalizing characters, who would otherwise feel ostracized in mainstream society, in the Frank N. Furter mansion.

When I heard about the Fall 2016 remake of Rocky Horror, I was beyond excited, especially because Laverne Cox, an actress whom I admire, was casted in the role of Dr. Frank N. Furter. I was shocked at this casting decision because “singer” does not immediately come to mind when I think of Laverne Cox. I was optimistic though, because Cox is an amazing comedic actress and I knew she would be able to fulfill the campiness required of the role.

The first teaser for the 2016 remake premiered earlier this year. As I was watching the teaser, I felt that I could not wait any longer for the film to come out. That feeling persisted until I saw the second teaser. I was worried at that point. The second teaser marketed the Rocky Horror remake as the fans being the best part about the film. In the second teaser, an audience is featured, in sort of a meta framing, watching the remake starring Cox. This was not the remake I was expecting. I was cautious at that point until the remake premiered on October 20.

The official title of the remake is The Rocky Picture Show: Let’s Do the Time Warp Again. As if the title of the film was not long enough, the producers decided to string on a bunch of extraneous words. I guess it is a good thing that the remake has a slightly different title because it differentiates itself from the original, which is necessary because the remake does not compare at all to its predecessor.

As if the title of the film was not long enough, the producers decided to string on a bunch of extraneous words.

My worries for the remake were confirmed when the opening sequence came on. Rather than having red lips appear onscreen, singing “Science Fiction/Double Feature,” with an entirely black background, the remake has an usherette (Ivy Levan) sing the song, while walking through the movie theater that is about to show the remake that we are also about to watch. It is only until the very end of the song that the camera does a close-up on the usherette’s lips, referencing the red lips that opened the original.

I can see the shift from red lips to usherette as adding some new creativity to the film. However, this shift ruined the introduction of a crucial theme: androgyny. The original Rocky Horror showcased red lips, signaling the feminine, while having a male voice sing “Science Fiction/Double Feature.” This theme of androgyny is embodied in multiple characters in Rocky Horror, especially Dr. Frank N. Furter.

My major problem with the remake is the aesthetics. The film tries to be campy and to capture the feeling of the original film, but fails to do so. First off, the colors of objects and the background in general is too bright, screaming, “I want to be campy.” Quoting Susan Sontag, “Intending to be campy is always harmful.”

Second, the new cast does not do the roles of Rocky Horror justice. They try to copy the original cast’s performances, but the effect just comes off as forced. Let’s take Rocky (Peter Hinwood in the original and Staz Nair for the remake), for example. Rocky is Frank N. Furter’s creation and Hinwood played Rocky as a “creature of the night.” Conversely, Nair played Rocky as a dumb blonde Ken doll. I’m not sure what kind of direction Nair received because Nair never came off as a “creature of the night.”

Also, in general, every character except Dr. Frank N. Furter is relegated into supporting roles. This means that Cox was the only cast member allowed to shine in the remake. The other characters were muted and their unique and eccentric personalities were never realized.

Finally, the entire remake leaned heavily on the musical genre. It’s not even a movie musical. The remake is more like a Broadway play that was filmed on camera. There were too many wide shots, emphasizing the elaborate set designs. Every movement felt very staged, like you would see during a Broadway musical production. If you watch the original, you will know what I mean when I say the aesthetics are all wrong in the remake. I felt like I was watching one of those musical extravaganzas that network TV loves to produce nowadays (I’m talking about Grease: Live, The Wiz Live! and so many more).

This Halloween, if you are looking to reconnect with Rocky Horror, I would suggest skipping the remake. As much as I thought Cox knocked out the role, the remake lost the eccentricity, the uniqueness, and the magic of the original film. The original Rocky Horror is a classic and the film should just be left untouched.