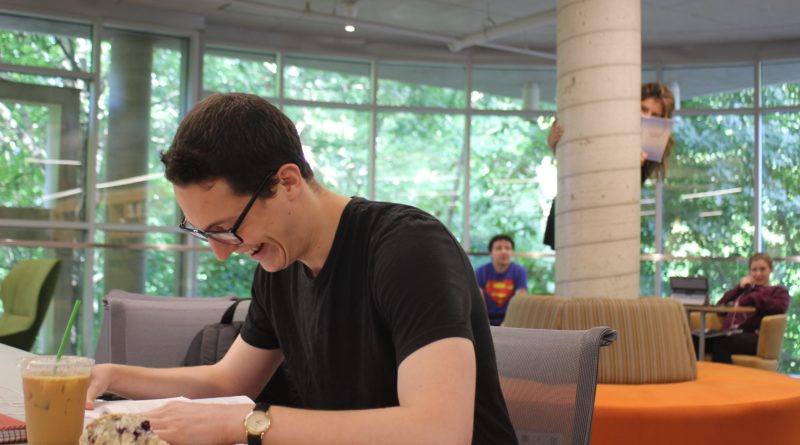 As the academic year began at Swarthmore, renovations on Essie Mae’s Snack Bar and sections of the Cornell Science & Engineering Library reached completion and re-opened for the campus & community. These two spaces are the most recent in a string of campus renovation and construction projects that have been started in recent years and will continue into the next decade of the college’s history.

Essie Mae’s Snack Bar, referred to as Essie’s around campus, re-opened on Monday, September 5 after an extensive remodeling that took place over the summer and after encountering a series of delays. On August 22, Director of Dining Services Linda McDougall announced that Essie’s would originally reopen on Monday, August 29.  However, that opening date was pushed back by a week in an email sent out Aug 26 by Executive Director of Auxiliary Services Anthony Coschignano. Vice President for Finance and Administration Gregory Brown explained at a press briefing in Parrish Hall that the late arrival of necessary equipment was to blame for some of the delay. Despite the setbacks, McDougall was impressed by the way the Facilities team handled the project.

“Facilities did an amazing job in keeping the renovation on track, and much of the delay in the project was related to the delivery and setup of equipment that was needed for this project,” she explained.

Essie’s serves sandwiches, wraps, salads, and other snacks throughout the day and into the night hours. In past years, Essie’s accepted student meal credits at certain time slots throughout the day, particularly when Sharples Dining Hall was not serving meals. But as explained by Brown in tandem with Coschignano, Essie’s has undergone a transformation for the new academic year.

“I think that [the remodeling] was a pretty substantial project… it’s bright, it’s more logical than it’s ever been. It’s great. The new Essie’s is an important change,” Brown said.

The largest changes to the new Essie’s are clearly visible upon entering the space. The larger seating / dining area’s dark wood paneling was replaced with light blue walls, instantly making the space appear more open. New lighting, new wall décor, and resurfaced tables were also added, but the general layout of the space remains the same.

In contrast, the serving area of Essie’s contains new equipment and the layout of the space has changed slightly. On a tour before the official opening, Brown pointed out several new features designed to make the student dining experience as comfortable and stress-free as possible in the serving area. Twin ventilation systems were installed to ensure that fumes and heat from the grill line are contained. Instead of a fixed menu, electronic monitors hanging over the serving area will display the menu’s specials and can be updated as needed to accommodate menu changes. Similar to the dining area, the serving area contains new lighting, producing a drastic change in the brightness of the space, compared to before the remodel.

In addition, an entirely new serving line / bar was added on western wall of the space in order to make room for the relatively large number of additions to the Essie’s menu. Additions include a personal pizza machine, pre-made hot sandwiches, and a space for a specialty bar similar to the one already offered in Sharples during meal times. Brown explained that the new Essie’s will have the capacity to prepare this specialty bar in their own space, instead of relying on other spaces as they have in previous years. There are also smaller product additions throughout Essie’s, like new bottled beverages, frozen entrees, and a corner that feels similar to a grocery store, where students can purchase staples like peanut butter and canned tuna fish.

Overall, student responses to both the renovations and new offerings in Essie’s have been generally positive, if not surprised.

“I think it’s interesting to see the clear influence of the college’s pivot towards being more of a ‘modern’ institution. The lighting is very pale, which gives a really clean and new look to the new Essie’s,” said Kyung Min ’18. In addition, Min noted that he was happy the college staff decided to keep similar lighting in the seating area, because otherwise it would not feel as inviting. He was also surprised by the addition of frozen foods and other grocery-type items.

“I guess they realized that students ‘grocery shop’ at Essie’s and wanted to take advantage of that,” he said.

Some students particularly appreciated certain additions to the menu options of Essie’s. Spriha Dhanuka ’17 felt incredibly passionate about the addition of “real” avocados to the menu, and described the new Essie’s as a “bountiful cornucopia”. The support for the addition of avocado was not limited to a single student on campus.

“I’m not sure whether I’m happier with the addition of the avocado or the mozzarella, but regardless it seems much nicer than it used to be. I never knew how much I needed frozen lasagna in my life until yesterday,” said Sam Wallach Hanson ’18.

Despite the addition of an entire new serving section at Essie’s, Brown said there were no plans to increase the total number of Dining Services staff on campus. Rather, Brown explained that his team was monitoring activity closely and could move additional staff members from other spaces like Sharples if needed. Coschignano noted that the same number of Dining staff could now operate more efficiently in the space.

Furthermore, the delays in the arrival of necessary equipment for the space made it difficult for training sessions to occur before the grand re-opening happened.

“Our facilities team bent over backwards and killed themselves trying to get [everything] in place… but because of the late arrival of the equipment, the training wasn’t what it should be, so the first day, I think yesterday, was a little bit of a shakeout. I think we’ll see that for a while,” Brown noted.

Students and other community members are also able to use the newly renovated main level of Cornell Science & Engineering Library, commonly referred to as Cornell, which re-opened on Monday, August 29.

The newly renovated space is still designated as a floor for group work and conversations, as it did before the renovation. But with new flooring, walls, color palette, and seating and work spaces, it is difficult to recognize where a particular desk or shelf once stood. The western wall of the library is lined with oversized bright green booths that can seat eight students comfortably, ideal for group work. The main floor space is dominated by brand new four-person tables and a raised working table reminiscent of an Apple Store’s Genius Bar on the northern wall, adjacent to a glass-encased private study room. Another more private study space is tucked behind the main northern wall, and the now-glass balcony on the east wall overlooking the still-unremodeled lower level is lined with green and orange lounge chairs.

These renovations are not the last intended for Cornell, as explained by College Librarian Peggy Seiden. She has plans for the second and lower levels of the library, which currently remain as they were during the previous academic year. In particular, Seiden called the computer lab on the second floor “a dismal space”, and expressed intentions to remodel it, citing the room’s history as a microform storage space as a reason for the lack of natural light. She also lamented the lack of quiet study spaces across the campus libraries, and wanted to expand study spaces like the second floor of Cornell so more students could use them. On the lower level, she identified the Sigma Xi seminar room, the now-superfluous compact shelving, and the lack of study rooms as problem areas needing to be addressed.

Overall, the renovations are representative of a shift from a focus on what materials and resources the library could offer students, to a focus on the use of the space in the library.

“Somebody asked me, ‘What happened to all of the books that were on this floor?’ … [and the answer is] a lot of those books were only here as sound buffers. It’s hard to explain… but in every discipline, there are all of these indexes and abstracts that we now have online. So we were keeping them on the shelves because they were absorbing the sound,” Seiden said. Sound engineering was important in the renovation process, and the removal of those shelves as sound buffers was offset by the addition of sound-absorbing ceiling tiles.

Several different groups and constituencies were all responsible for making the renovations successful. The project steering committee worked closely with the college’s Associate Project Manager Mary Ciurlino, and chose Ballinger, the architecture firm that will be working with the college to construct the new Biology, Engineering, and Psychology (BEP) building, to work on the project.

“It might be a preview [of the BEP]… but it was really more about form than function, and [Ballinger staff] were wonderful to work with,” Seiden said. In addition, the group consulted faculty members, visiting librarian Dora Wong, Access and Lending Services Supervisor Terry Heinrichs, and included three student representatives on the project steering committee. Seiden also expressed that the late Science Librarian Meg Spencer would have played an important role in planning and implementing the project.

Science Librarian Andrea Baruzzi, who joined the Libraries staff over the summer, felt that the team did a good job with the main level renovations, but that there was still work to be done.

“I think it’s definitely on par with other institutions, as far as the direction they’re going in, with giving students more space to study, and different kinds of spaces to study. It’s pretty fascinating because even on the very first day we opened, it was really fun to see people come in and explore the space, and from the very first day, every different area was being used,” Baruzzi explained. Since there was no official opening ceremony, students trickled in and out of the library throughout the day, but she felt the reactions to the space were generally positive. Baruzzi did recall seeing a particular group of students who seemed to study regularly in Cornell enter into the new space for the first time.

“They went around and literally sat in every seat, and I think have sort of decided ‘Yeah, this will work, we’re gonna be okay,” she explained.

The student response to the renovations has generally been positive, with some reservations stemming from how different the space has become. May Dong ’18 was happy with the increased seating capacity and the noise reduction panels, but felt unsure about the new color scheme. Aamia Malik ’18 generally appreciated the changes, with minimal reservation.

“I appreciate that it feels like a very open space and the lighting is great. I do think that the tables in the middle make it look a little like an Apple Store,” she said. Malik also enjoyed the oversized booths, but felt that their large seating capacity made them slightly awkward.

Jordan Reyes ’19 was pleasantly surprised by the changes when he saw them for the first time, so much so that he immediately sent a photo of the main level to his friends.

“… [I] think it is now very open in terms of space, and it has a cool modern look to it. I appreciate the glass railing, it really makes the Crum the focal point, and it is so aesthetically pleasing!” he said. Despite the positivity, he noted that the space felt a little louder and could possibly be confused for a lounge, a sentiment Seiden had hoped to avoid.

Both Cornell Library and Essie Mae’s are open to the community to visit during their respective business hours. There are several projects still currently under construction on campus, including NPPR, the new residence hall, and the Whitter Place building, which will temporarily house the Psychology department and eventually Studio Art spaces.