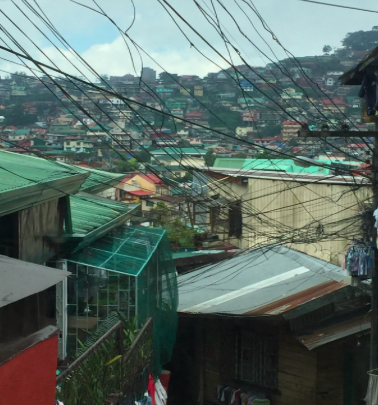 It was Monday, July 18th, when I woke up bright and early to the scent of a hot dog and rice breakfast. By that day, I had been in the Philippines for about five weeks, and I was staying at my friend Melissa’s home in San Juan, La Union. Before arriving in Melissa’s province, I was staying with my aunts and uncles in the Cavite province for three weeks, traveling around there and Manila.  My entire experience in the Philippines had been incredible, and this day would be no exception.

I was excited for the upcoming activities that would finally place me in a cooler environment. Yes, in a tropical nation like the Philippines, with its scorching and humid climate, there is a region that is almost ten to twenty degrees cooler than the rest of the country.

That day, I went to the city of Baguio in the Benguet province with Melissa, her cousin Nic, and her auntie, Nora. Baguio is about a two-hour bus ride from San Juan’s neighboring city, San Fernando. To get to San Fernando, we used the transportation unique to the Philippines: the jeepney, made from U.S. military jeeps, and known for its crowded seating. As we rode in the jeepney down the highway, I felt the warm morning air slowly boiling into the hot, tropical weather that is usual for the country. Luckily, the bus we rode in was air conditioned. Baguio is not an easy city to reach because it is set upon the mountains and the road leading to the city features a lot of twists and turns.

My first site of Baguio was the cemetery nearby the city entrance. Rather than seeing tombstones, I saw little houses situated atop the hills. I thought the cemetery looked distinctive due to its layout and use of little structures.

As we got closer to our stop, I got a better view of the city. Through the electrical wires, I could make out all of the colorful buildings that scattered the hills. Once I stepped off of the bus, I felt the cool air brush against my skin. I was relieved because I knew I could explore the area without having that gross, sticky feeling that comes with being in a tropical country.

We hailed a taxi and headed to our first site. On the way to our destination, we passed two locations rumored to be haunted, Laperal White House and Teacher’s Camp. While Melissa and Nic were freaked out, I was very curious because I have never had a paranormal experience. I wanted to stop the taxi so we could all venture into the two haunted sites, however, Laperal White House was closed off and we had no time for Teacher’s Camp. Whether or not the two sites are indeed haunted will remain a mystery until I visit the Philippines again.

We arrived at Mines View Park, which offers a lot of breathtaking views of the mountains surrounding Baguio. Before going to the observation deck, we stopped to take a picture with the very large resident St. Bernard dog. The dog is an odd attraction in Mines View Park, but many tourists enjoy petting the dog and taking pictures with him.

I had one of my favorite desserts called taho at Mines View Park. Taho is soft tofu and sago pearls in a sweet syrup. However, I did not just have any regular taho. I had strawberry taho. Baguio is known for its strawberries because the city possesses the optimal environment for the fruit to grow. It was fitting to see Baguio put a spin on a classic Filipino snack.

After this refreshing treat, we headed towards Burnham Park. This location provided a lovely and serene environment to escape the urban atmosphere of Baguio. The four of us decided to paddle in a boat in the lake, which sat at the center of the park. We were probably the worst rowers in the lake because we were successful at neither moving forward nor turning. Our time in the lake was cut short by heavy rain. We were in the worst possible position as our boat was in the middle of the lake. The rain poured hard and crashed into the water around us. I experienced a whirlwind of emotions. I laughed at the situation because the rain just happened to come when we were far from the dock and then worried that my clothes and bag would get soaked which, of course, did happen. I was determined to paddle the boat back to the dock so that we could all find a haven in a covered, dry spot. By the time we were able to get the boat to the dock, the rain stopped and we were left dripping water on the side of the street as we tried to hail another cab.

SM Baguio was our last stop in the city. The SM (which used to stand for “Shoe Mart,” now rebranded as “Super Mall”) is the best mall chain in the world in my opinion. The SM malls are huge, with many stores ranging from retail to luxury and many food options such as Jollibee (Filipino), Chowking (Chinese), and Bimibob (Korean). The province of La Union does not have any SM malls at all so I was very excited to go to the one in Baguio.

By nighttime, we boarded a bus back to San Fernando and our day trip to Baguio concluded. Although I only spent a day in Baguio, I call the city my favorite destination in the Philippines. It has beautiful views, food variety, and frankly I loved the city most for its weather. After the visit, I can understand why so many Filipinos flock to the city during the summer. Baguio is unique for its city plans and its diversity in cultures. One day was not enough and I have so more I want to do in the city of Baguio.