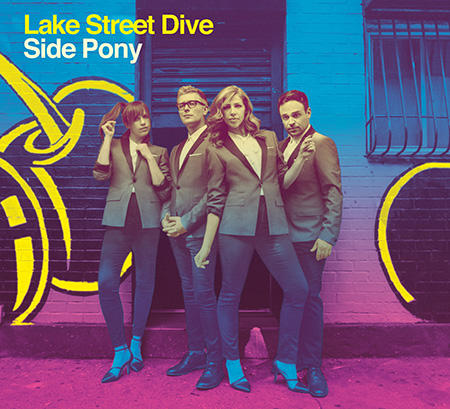 I stumbled out of the Fillmore last Friday with self-inflicted whiplash, ringing ears, and a triumphant lump in my throat.  Soul-pop phenomenon Lake Street Dive played the hip, industrial venue on March 18th, and the show sold out well before the start of the month.  Three years ago they would scarcely have filled Olde Club.

A decade after their decision to go rogue and form a pop band, these four conservatory kids finally earned a commercial breakthrough with their 2014 magnum opus, Bad Self Portraits.  The album was densely packed with infectious, memorable tunes, and it established the fresh yet deeply familiar sound for which the group is known.  LSD has since signed to the rather artsy label Nonesuch (known for acts ranging from The Black Keys to Joshua Redman), and they are currently touring in support of their new LP, Side Pony, which dropped in mid-February.  High quality yet unremarkable, Side Pony feels like a victory lap for the career-defining achievement of Bad Self Portraits.  But while LSD didn’t significantly develop their sound on Side Pony, they did further embrace the ‘70s Soul component of their aesthetic.

This shift was manifested in their decision to tour with ten-piece Houston based Soul revival band The Suffers.  The selection of The Suffers was the first of many prime choices that made for a remarkable show: never in my life have I seen a better opener.  The Suffers hit the ground with such intensity that I was worried the main act would fall short.  I couldn’t help but think of the late ‘60s rockers foolish enough to enlist the budding Led Zeppelin as an opener, only to find their audience blown away like Team Rocket.  Fortunately, LSD exceeded my lofty expectations, thus rendering The Suffers an ideal crowd warmer.

The Suffers first collected themselves with a roll call, each member shouting a number until the intensity climaxed at ten, triggering a primal scream from everyone on stage.  Right off the bat, this ritual defined the band’s informal yet fierce atmosphere, demanding that the audience drop their preoccupations and get ready to move.  But no introduction could have prepared us for the sonic boom that was to follow.  Lead singer Kam Franklin, clad in a glittering emerald dress, owned the stage as nine guys in black suits bounced and swayed in a semi-circle behind her.  Franklin’s powerful voice was graced with a rough, humanizing edge that perfectly complemented the dirty, boisterous swell of the rhythm and brass sections.  She delivered each line with the confidence of James Brown, evoking a mood in the realm of either spirituality or sexuality.  Her stage presence was that of someone lip-syncing into the mirror when her favorite song just came on the radio.

Such enthusiasm was contagious, and the rest of the band rose to her level.  Two drummers competed to see who could punish his cymbals the hardest while the horns colored the beat, blaring soulful harmonies.  By the end of each song most of the band was head banging.  Individual members demonstrated their musicianship with moody, emotion-drenched solos, most notably on the powerhouse closing number “Giver.”  Most of the set made me thank God there was room to dance, but on this final song the band slowed to a smooth, heavy groove.  The minimalist arrangement left space for Franklin to showcase her expansive textural palette.  For seven minutes each chorus built in intensity, eventually swelling to an ecstatic, heart-pumping maelstrom with horns crying out beneath contorted vocals.  It was awesome.  Few knew of The Suffers coming in, but no one could have left that room without this name etched in their brain.  Stylistically modern with a Muscle Shoals spirit, The Suffers are one of the most sincere and forceful bands out there – a hard act to follow.

But LSD knew their own strengths: consistently excellent songwriting and an audience devoted enough to know each word by heart. For those unfamiliar, LSD sounds like an alternate universe in which Paul McCartney (whose bass lines they directly quote) buddied up with Stevie Wonder and made a Motown record with the style and production of contemporary pop. My fear of being underwhelmed vanished as soon as the group took to the stage, silhouetted against a neon pop-art design amidst billowing fog. The four musicians posed like idols, and the crowd treated them as such, cheering fanatically before the music even started.  LSD has a reputation for quality live performances, and it is well deserved.

This concert was thrilling. So much, in fact, that the only information I’ve been able to glean from my six pages of notes is that I was too excited to write even sort of legibly. There was not a low point in the set, so due to my chronic bounciness, I’ve only been able to decipher the phrases ‘holy shit’, ‘BASS SOLO’, and ‘maximum sexy’. Having fun is practically LSD’s mission statement, and seeing them do it person drove the point home.

They hit the ground running with Side Pony’s opening track, “Godawful Things”, and immediately dispelled of one of my only complaints about the band – that they are too conservative in displaying their musicianship. Lead singer Rachael Price dominated center-stage with charismatic dance moves and hair flips as Bridget Kearney rocked out on her double bass, swaying around as if enraptured. The Philly native Mike Calabrese absorbed about a gallon of sweat into his headband, pounding the bass drum with bare feet. But the first (and possibly greatest) display of rabid virtuosity came from Mike “McDuck” Olsen, the most stolid and inconspicuous of the four performers. Perched motionless on the side of the stage, McDuck clutched a jazz guitar high on his chest and teased out a careful yet utterly nasty solo. He proved himself equally fluent on trumpet, improvising florid, tasteful jazz runs on “Better Than”.

Though no one on stage could match McDuck’s raw soloing prowess, the others also demonstrated their musicality much more overtly than they tend to in the confines of the studio. One highlight was the intro to “Elijah” in which Calabrese opened with an extended drum solo that ranged from silky smooth to thunderous. Kearney later hoisted her bass onto the drum platform and joined in the ecstatic fray, stunning the crowd when it seemed that there were no more tricks up their sleeves. Such moments of artistic wizardry were a lively addition to the show and made me wonder why the musicians seem so intent on hiding their virtuosity on each record (see link).

But it was the more understated qualities of their musicality that allowed them to add these elements of flare. The first thing I noticed was that LSD was obscenely tight. They not only produced a sound nearly indistinguishable from the clean, well-balanced production of their studio work, but also did so with apparent ease.  The band made deceptively simple arrangements sound lush while navigating more intricate sections with relaxed confidence. Throughout the show their timing and emphasis were impeccable, a notable consequence of playing with the same individuals for fifteen years straight.

Occasionally the band’s four part harmonies would slip (especially on slower numbers like “Don’t Make Me Hold Your Hand”), but I found these rare moments humanizing – reminders that these were real people singing their asses off for us and not robots spewing out meticulously rehearsed morsels of pop. LSD didn’t flaunt their technicality as a goal in and of itself, but rather harnessed their pristine coordination as a safety net for when they flew off the hook. Tightness for its own sake threatens to come off as empty or mechanical, but LSD’s superior musicianship allowed them to take artistic liberties while keeping their sound in mint condition.

Consciously defying expectations, the band experimented most with the songs that the fans knew best. At the climax of the set they consecutively stacked the delicious singles “You Go Down Smooth” and “Bad Self Portraits”, sporting novel arrangements for both. Price perhaps strayed the most from the studio template, belting seductive melismas and skipping playfully around the beat in a manner revealing of her jazz training. Each line emerged dripping with personality, and her stunning performance greatly contributed to the concert’s spontaneous, personal atmosphere.

Lake Street Dive sounds definitively better live, thus distinguishing them from the overwhelming majority of pop acts. The band had the rare ability to make a performance feel fresh, intimate, and one of a kind while still giving the audience everything they want to hear.  Because the group has become such a staple of alt-pop among college kids I had expected the crowd to be watered down with pseudo-fans, who perhaps knew a single or two but really just wanted to dress in flannel and go to a loud place where they could bask in the stage presence of a hot lead singer. I couldn’t have been more wrong. The audience was attentive and voracious, knowing most songs well enough to sing the background vocals. It is heartwarming to be part of a room of strangers who are briefly but powerfully united by the salience of their shared taste and enthusiasm.

Music preference is an important marker of personal identity; so engaging in the collective expression of such a shared passion creates the kind instant kinship that is unique to a successful concert. After a bombastic encore (including a faithful rendition of Bohemian Rhapsody that culminated in a sea of head banging) the crowd drained out into the Fillmore’s spacious lobby. A DJ blasted soul, and scores of joyful audience members stayed to dance with one another until they had worked off the remnants of their leftover energy.