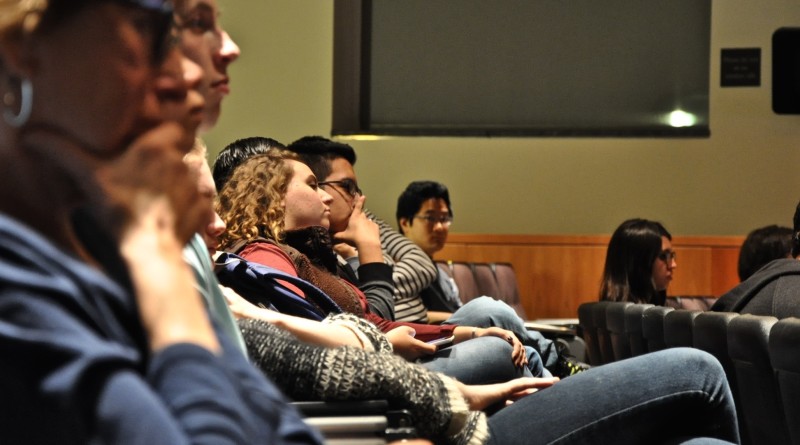 Women’s History Month is as much about celebrating how far we have come as it is about paving the way to gender equality. While women have made much progress in entering and succeeding in STEM (Science, Technology, Engineering and Mathematics), economics, philosophy and other male-dominated fields, we are still far from achieving full equality. According to 2013 US-level data, female-identifying students made up only 19 percent of engineering majors, 18 percent of computer science majors, 19 percent of physics majors, and 29 percent of economics majors. Take one look around the Science Center, a philosophy seminar, or economics lectures in Sci 101 and you will see these numbers at play here at Swarthmore. It is not uncommon to be one of a few or the only woman in classes in male-dominated majors, and it’s an experience I’ve had many times.

A large part of the gender gap in these fields revolves around how women behave and how they perceive themselves. We must continue the good work being done to address this side of the issue, by encouraging women to be confident and build themselves as well as their female peers up. We must continue to build and strengthen communities of women who empower one another and push for greater equality through a coalition. For example, I admire so much the work that WICS (Women in Computer Science) does to build a strong community within Swat’s CS department.  They empower women across class years to take risks and thrive in a field that still feels like a “boys club” at times.

We must also continue to encourage female students to find mentors and faculty members who will advocate for them and incentivize them to pursue opportunities they would otherwise not take. I don’t think I would have submitted papers for publication if it hadn’t been for my male and female professors in the Economics department. I did not think I could produce worthwhile research, but they challenged me to take risks, and now I am considering pursuing a Ph.D. in economics. These are only some of the ways in which we must continue to empower female students in male-dominated fields.

But there is a whole other half of the equation that we are failing to address: the very culture that is perpetrated by our male peers, even if unknowingly. Ask female students in STEM, economics and philosophy if they have ever been shut down in class, or been the last one to find a lab partner, or been called “intimidating” for acting confident. Most women have experienced one of these things at least once, if not all of them. Some of the terms used to describe some classroom environments in these fields include “hostile,” “cliquey,” “obnoxious” and “isolating.” So, besides putting the onus of closing the gender gap on women, let us discuss how male students can be better allies.

First, men in male-dominated fields must think about whether they are isolating women or excluding them from a collaborative learning process. We take great pride of the collaborative nature of the sciences and engineering. We work together on our homework, study in groups, and commiserate about difficult problem sets. We tend to work with our friends, of course – but if your field of study is mostly male and your friend group is also mostly male, then how likely are you to invite the three girls in your class to work on problems together? Sometimes study groups end up being too closed off, and that ultimately hurts the learning and academic performance of those who are not coming into a class with a study posse. In male-dominated fields, women might be the ones being left out. As they struggle to complete assignments on their own, they become more likely to quit the field altogether, as feelings of inadequacy increase.

Secondly, male peers need to understand how their actions perpetuate an environment that ultimately pushes women away from certain fields. Attitudes towards asking and answering questions in class are an example. I almost did not declare an Economics major because of my intermediate microeconomics class. It was a big class, most of the students were male and there were a couple of guys who would aggressively participate in class. The professor would ask questions, as professors usually do, and instead of the usual initial silence that follows a question, a male student would blurt out the answer without even raising their hand. There were a select few would do this, making it incredibly difficult for anyone else to participate in class. In our discussion sections, guys were quicker at point out a mistake on the board if made by a woman rather than another man.

I assumed the rest of the classes in the major, especially the honors seminars, would have similar environments and class dynamics. The only reason why I continued to push through was because a faculty member supported me and told me that the rest of my time in the department, especially in the honors program, would be different. I decided to stay in the major because of my introduction to econometrics class and the desire to further explore the possibility of graduate school. Three semesters later, I was the only woman in Advanced Microeconomics and thrived in a class environment where my peers respected me and recognized me for my intellectual abilities. I was only slightly more confident then than I was before, and so I was not the one who was different, but rather it was a different environment. The class was better managed and we all worked together, with the men in my class respecting me based on my abilities and hard work. That is the kind of environment in which people, not only women, thrive.

Male peers must be more like the guys in the second rather than the first class. Good allyship entails critically looking at oneself and how one’s behaviors and inherent beliefs affects others. In terms of creating a welcoming environment, men must think about how their over-excitement in class can be perceived as aggressive participation, they must try to use the same tone to criticize and respond to men and women, and they must be willing to openly listen to female peers’ experiences. The environment in male-dominated disciplines has been constructed over the years so that men, in particular white men, may thrive. Gender equality can only be achieved if men are willing to deconstruct the structures that they reproduce and that keep women away from remaining and succeeding in certain fields.

Male peers must also check their inherent biases against the women in their classes. As we know, there is no inherent gender differential in capability. And yet, men (and women!) attribute different levels of authority based on gender. I have TA’d classes in economics and was usually the one approached with the “quick” or “dumb” questions. It took a long reiterative process for male students to understand that I was as capable as my co-TAs and could be approached with more “nuanced” questions. I understand there is something about approachability and the idea that women are expected to be motherly. We can be all of it, though! We can be tough, we can be intelligent, we can be motherly, we can be complex human beings that do not fit into preconceived notions of ability and behavior.

Cultural change is difficult, and I don’t expect all men in male-dominated fields to completely internalize good allyship overnight. We can, however, work together to make sure that people’s majors and life paths are not defined by gender alone. In fact, a lot of the suggestions made above are also valid in promoting good racial and ethnic allyship. In changing our campus, we can take steps forward in promoting equality nationally and globally. There are deep structures at play here, and women have made great progress, but no system can be solved without the other half of the equation.