Arts & Features » On This Day: The Succession of James I 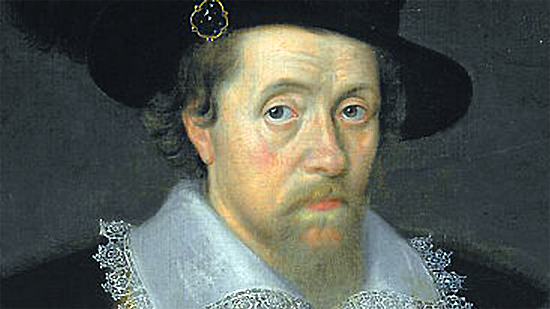 On This Day is a new weekly column that will explore historical happenings from the day the column is published.

On this day in 1603, Queen Elizabeth I of England died, and James I was crowned her successor.  Elizabeth, known as the “Virgin Queen,” had no children.  When the time came to find an heir, James seemed the most likely candidate; although he was a Stuart, and not a Tudor (the dynasty to which Elizabeth belonged) he did have Tudor lineage.  His great grandmother, Margaret Tudor, was Henry VIII’s older sister.  Margaret’s marriage to James IV, King of the Scots, orchestrated by her father, Henry VII, helped ease political and military tension between England and Scotland, and laid the groundwork for the eventual union of the two Kingdoms.

James’s transition to power was surprisingly smooth, considering how fraught the process of choosing a successor for Elizabeth had been. Take, for example, the case of James I’s mother, Mary Queen of Scots. She was Henry VII’s great great granddaughter; her great grandmother, the aforementioned Margaret, was a Tudor.  With all of Elizabeth’s legitimate siblings dead, and the unlikelihood that she would ever produce an heir herself, Mary held perhaps the strongest claim to the English crown.  She was, however, a Roman Catholics, a fact that sat poorly with the Protestant Elizabeth, and very poorly with many of Elizabeth’s staunchly Protestant advisors.  When Mary fled from Scotland to England in 1568 hoping to find support following a military defeat, she was promptly imprisoned, and, after 19 years in captivity, executed.

To our contemporary eyes, it seems a little strange that Elizabeth and her government managed to maintain healthy enough relations with James to declare him successor after the murder of his mother.  But the allure of the English throne supplanted any desire he may have had to avenge his mother.  After all, James was Protestant and a man, two qualities that, when paired with his lineage gave him a strong claim to the throne. For James, ruling England was certainly a huge leap in prestige from just ruling Scotland, a much poorer and less powerful Kingdom.

So, on March 24, 1603, Elizabeth died, and James was immediately declared her successor.  The transition to power was surprisingly smooth, and James set out for London soon after the announcement.  He had already ruled Scotland  — where he would return only once after 1603–as James VI for 36 years; now he was James I, King of England and Ireland, as well as King of the Scots.  Although subsequent monarchs would rule the two Kingdoms under one crown, England and Scotland would not be united into the Kingdom of Great Britain until 1707.

TL;DR: March 24, 1603–Elizabeth I died, James I was named her successor, and England and Scotland became jointly ruled under the same crown.

3 thoughts on “On This Day: The Succession of James I”