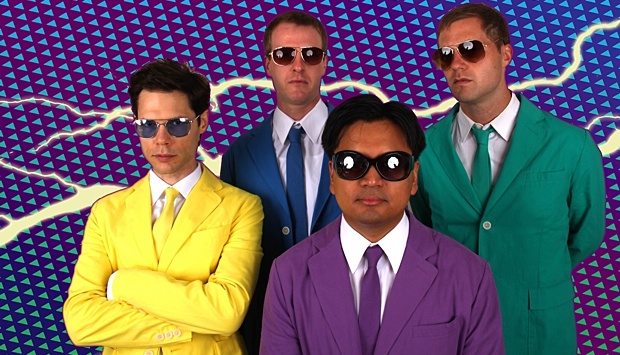 “If mostly other people do the killing I guess that means it’s sometimes us,” replied bassist Matthew “Moppa” Elliot in response to the inevitable question about the name of his band. Though many consider Mostly Other People Do the Killing (MOPDtK) one of the most original and talented ensembles of their generation, others would argue that jazz itself is the object of the quartet’s murderous tendencies. Two weeks ago I escaped my typical Monday routine to witness the crime in person at the Philadelphia Art Alliance.  The attic room reminded me of a puny, urban Upper Tarble, with benches and folding chairs informally clustered around the instruments.

During a lull in a twenty-minute medley Ron Stabinsky plunged his arm into the belly of his Steinway and muffled the strings of a cyclic motif in the lower register. Meanwhile, Kevin Shea scraped his stick around the rim of the snare drum as Elliot coaxed a high-pitched whine from his bass. Jon Irabagon stood center-stage with his eyes closed, lightly inhaling as his tenor sax whimpered. Five minutes later all four were playing as loudly as they could. If a jazz artist from the 1950’s were to hear an excerpt of this moment he might assume that these 21st century cats had literally forgotten how to play their instruments. The actual audience, intellectual types of a broad age range, swayed about with their eyes closed, as if in rapture.

But despite moments (or rather stretches) of chaos and abstraction each member displayed staggering prowess on his instrument; the gentleman of MOPDtK are top-tier musicians. Elliot formed the band in 2003 after meeting trumpeter Peter Evans, a former member, at the Oberlin Conservatory for music a few years earlier (though he admitted to almost choosing Swat). Relocating to New York City after college, he played with acts including Jon Lundbom’s Big V Chord and founded the Hot Cup record label, which produces MOPDtK. The bandleader is a formidable bassist in his own right, but the other members have equally stunning credentials.

Irabagon, a versatile and expressive technician, gained an international profile after winning the prestigious Thelonious Monk Saxophone Competition in 2008 (past winners include Joshua Redman, who beat out Chris Potter in 1991). In addition to leading his own groups and solo projects, Irabagon has cut with contemporary giants including Dave Douglas, Chris Lightcap, and guitar god Mary Halvorson.

Shea, recruited through Halvorson, attended Berklee and was voted “Best Drummer of 2012” by the Village Voice. After his arrival MOPDtK shot to notoriety with the critically lauded releases of Shamokin!!! (2007) and This Is Our Moosic (2008). A year later they racked up Downbeat’s Rising Star Ensemble award, in addition to awards in their individual instrumental categories. For their 2015 project Mauch Chunk MOPDtK replaced trumpeter Peter Evans with pianist Ron Stabinsky, who adds a richer chordal basis for their lunacy.

This present line-up met for a question and answer session before the show.  Elliot perched on the piano bench and barked answers with a dignified glare, his face flanked by bushy sideburns. Stabinsky, sporting a Dr. Strangelove-style glove on one hand, served as a quirky counterpoint to the bandleader’s intensity. Shea stood silent in a corner rapidly drumming on his leg while Irabagon, according to the others, “got wasted in the back room”. Before joining in Irabagon’s pre-show festivities, the musicians shared their artistic philosophy. They believe that all musicians should be free to play whatever comes to them and that the purpose of compositions is not to restrict musicians but rather to prevent them from resorting to their default patterns. Having a developed voice as a musician means being capable of singular contribution in as many contexts as possible, not having one distinctive ‘sound’. This philosophy is evident in the chameleonic nature of the musicians: MOPDtK is notorious for their allusions to various historical genres within the jazz idiom.

Despite their flamboyant presentation, which walks the line between homage and parody, they claim that humor in no way motivates their period references – they simply believe that styles such as ‘20s era Dixieland are underrepresented.

“We’re not a historical recreation band,” Elliot assured us, emphasizing that the group’s top priority is to play however they play as individuals, which of course must feature their musical lineage. In fact, the ensemble manages to put a post-modern spin on their historical flashbacks, erratically switching from an entropic cacophony to a swinging bass line or a smooth jazz lope. Moves like this question the typical free-improv values of stylistic coherence and fluency in mood shifts. This was one of many audacious performance habits.

“Sometimes I’ll count off one song and each of us will start playing a different one”, remarked Elliot before the show. “If I write something and expect them all to play it note for note I’d better find a different band.”

And indeed, there would be no way to script the series of pops, squeaks, and growls that marked the beginning of their opening number “Mahoopany” (which quickly shattered into an amalgam of different songs). Shea struck his music stand with a machine-gun-like drum roll, then dropped his sticks onto the snare and began to spank his cymbals bare-handed. Stabinsky and Irabagon took turns erupting into melodic swirls, which grew more frantic and abrasive on “Herminie”, the second number.

The intensity ramped up gradually throughout the set and climaxed with a near-half hour suite that seemed to take fragments of songs, both originals and covers, and haphazardly spew them out in a collage of sound with no organization beyond the spontaneous directives of the musicians. While introducing the last number, the bassist attempted to recall which songs they had playing in the epic montage. He gave up. Then, as he had with every song, Elliot laid down a simple, groovy riff (which the others proceeded to mercilessly drown out and deconstruct). Throughout the set the bandleader was grinning, laughing, and shouting encouragement at his eclectic troupe of virtuosos.

Elliot was not alone in his jubilance; this was one of the most playful bands I have ever seen. They wove their sonic worlds with the attitude of children at play, never saying no to an idea and delighting at every twist and turn. Typically, when musicians free improvise there is a tension between each individual’s personal ideas and the mutual desire to stay in tune with how the group is moving as a whole. But at certain points in this concert the musicians chose to shrug off the gravitational pull between them and fly off in their own bizarre directions, only to reconvene moments later in a completely different location.

Their reaction time was not perfect – often when one member would begin a new thread it would take seconds for the last to catch on – but what they lacked in reflexes they made up for in sheer force of will. Each musician had the confidence to commit to something totally absurd and each had the faith that his bandmates would follow him there (hence the abrupt changes in rhythm and mood). This attitude of exploration even extended into the realm of “non-musical” sounds. MOPDtK seems fascinated with the physical nature of their instruments and all sonic variety for which the material allows. They often became transfixed on certain aural textures, in addition to melody and rhythm. Jazz has always been attentive to paradigm shifts in popular music, and MOPDtK follows the modern trend of emphasizing timbres (exemplified in the production values of Hip-Hop, Electronica, and post-Beatles Pop).

I’m unable to listen to a band of this ilk without starting to question every scrap of musical dogma I’ve amassed in a short lifetime of music nerdery. This is not accessible stuff, at least for my virgin ears; I still haven’t figured out what they’re trying to do as musicians or what I should try to hear as a listener. What’s most readily apparent is that they’re not trying to sound pretty. Okay, maybe sometimes they are, if it’s what they feel like doing at the moment, but it’s one of many goals, not the baseline from which they build deeper substance, as is the case with most bands. Though it’s easy to see that they’re not trying to sound conventionally nice (euphonious, accessible, etc…), it’s much harder to decipher what their alternative goal is. Should I listen for the emotional elements of their playing and revel in the profundity of such direct expression of what it’s like in someone else’s mind? Are they really just trying to do things that sound cool and a lot of it goes over my head?  Am I overthinking this?

If I posed this question to every member of the audience I doubt any two would give the exact same answer. MOPDtK makes complex music in the sense that there are so many valid angles with which to engage, and I believe that asking these questions is part of what a postmodern aesthetic experience entails. The fact that I don’t quite understand why I’m listening to a guy make fart sounds through a metal tube makes it extra gratifying when I ultimately settle on a conclusion.

My personal answer is this: a good free-form improv group can collaborate to create a sonic realm that is utterly unique. If the musicians are sufficiently on the same page as one another they will all inhabit a certain mental space together, feeling the same inexplicable “mood” or “vibe” and playing in a way that reproduces and morphs it. And if they are subtle and expressive with their instruments I can enter into this world with them so that when the piece ends it feels like I’m waking up to reality. I find this feeling beautiful, and amidst the chaos of MOPDtK’s show there were moments of sublimity that brought me there.