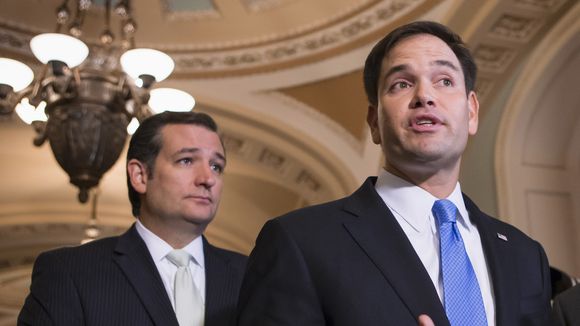 Heading into Valentine’s Day weekend, I was certain the most embarrassing thing I would have to sit through was Screw Your Roommate.

Then I turned on the Republican presidential debate.

The ninth debate in South Carolina was a free-for-all, full of tense moments that ranged from cutting to absurd. Ben Carson solemnly reminded us of Josef Stalin’s 3-step plan to undermine America. Jeb Bush accused Donald Trump of getting his military advice from Cartoon Network. Donald Trump accused Jeb Bush of being Jeb Bush, a tactic that has been proven to be devastatingly effective for him thus far. But the most interesting exchange came from Senators Marco Rubio and Ted Cruz as they continued their seemingly endless fight over what their immigration positions really are.

Ted Cruz attacking Marco Rubio over immigration has become so common that it ought to be considered one of the few certainties in this unpredictable world, along with death and taxes.  So when Cruz trotted out his usual talking points, I rolled my eyes and mentally prepared myself to sit through another five minutes of yes you did, no I didn’t squabbling. But then Cruz added an interesting new twist to this tired old debate, concluding: “Marco went on Univision in Spanish and said he would not rescind President Obama’s illegal executive amnesty on his first day in office. I have promised to rescind every single illegal executive action, including that one.”

While this statement is straightforward enough on the surface, it has several important connotations that bubble under the surface. Cruz clearly placed emphasis on the words “Univision” and “Spanish”. In a country where a significant part of the population becomes irked when they are instructed to press 1 for English, accusing Rubio of supporting amnesty for the undocumented in Spanish on a Spanish language news station has a subtle residue of nativism. It’s not too hard to picture the questions suddenly popping up in a Southern Populist’s mind: Why would he ever need to speak in Spanish when he’s in America? Who knows what else he’s said on Univision that you just haven’t heard about? Does he have a hidden Latino agenda? Then Cruz reminds us that he has promised to overturn all of President Obama’s executive actions including DACA, further suggesting that although he too is a Cuban-American, he is not beholden to any ethnic allegiance like Rubio supposedly is.

As a Mexican-American who grew up in a Southern state culturally similar to South Carolina, where the debate was being held, Cruz’s phrasing seemed vaguely familiar to me. Whenever I spoke Spanish with my family in public, I would often be scolded by adults and told to “speak American”. If I mumbled in Spanish at school, some of my classmates would inexplicably assume I was talking about them and often became suspicious and even enraged. The attitude there was clear: If you spoke a language other than English, your motives and loyalties were dubious and best and treasonous at worst. Cruz’s hazy suggestion that Rubio was partaking in ethnic politics is also a contentious issue in the South, where many people I knew fumed when Obama first won in 2008, complaining that “they only voted for him because he was black”, failing to take into account that many had voted against him for the same reason.

Of course, Cruz could have simply been implying that Rubio was guilty of “Hispandering”, or pandering to Latino voters while flipping his position in front of a traditionally Republican audience. Politicians from both parties have struggled with accusations of Hispandering recently, with Hillary Clinton even sparking a hashtag, #notmyabuela, after her campaign sent out a poorly conceived list of ways Hillary Clinton is “just like your abuela!”  But perhaps the most curious aspect of this skirmish was the reception to Cruz’s comments: his call for repealing executive action received relatively weak cheers, and his comments on Rubio’s Spanish drew an even mix of cheers and boos. If the audience was full of lobbyists and special interests as Donald Trump alleged, they were surprisingly cosmopolitan ones.

Rubio, who has recently faced heavy backlash for his perception as a rehearsed, robotic candidate, responded in an uncharacteristically off-the-cuff, almost disdainful manner, cutting off Cruz and saying: “Well, first of all, I don’t know how he knows what I said on Univision because he doesn’t speak Spanish.” The implications here are less ambiguous. In many Latino communities, especially big cities such as Miami where Rubio is from, an inability to speak Spanish fluently is seen as a personal and cultural flaw. Latinos who can’t speak Spanish are often mocked for this shortcoming, which is likely why Jeb Bush, who is married to a Mexican national and speaks Spanish better than any of my high school teachers, chortled off-screen when this happened. Rubio, who grew up in Latino-dominant Miami and likely missed the hint of nativism in Cruz’s statement, did not deny speaking in Spanish on Univision but interestingly chose to portray Cruz as someone who sold out his culture and shunned the societal expectations placed on him by his ethnicity. The audience responded to this more favorably than they did towards Cruz, which makes me wonder how many of them were Florida transplants bussed in by the Rubio campaign.

Cruz is hardly the only Latino politician to be dogged by this question. Julian Castro, the former Housing and Urban Development secretary and Democratic vice-presidential contender has struggled with his lack of fluency as well. But Cruz seemed visibly bothered by the comment, so much so that he interrupted Rubio in a moment of raw Latino conviction that almost made me root for him: “Marco, si quieres, ahora mismo, díselo ahora, en Español, si quieres.” This translates roughly to: Marco, if you want, right now, tell them now, in Spanish if you want”. This was especially impressive since Cruz blatantly mispronounced “Univision” mere seconds before he managed to piece together a whole sentence on the fly. It was also an astounding 180 degree turn from his earlier remarks which implied that Rubio had erred in speaking Spanish as he now found himself trying to out-Spanish Rubio. After all, speaking Spanish on Univision is a requirement. Speaking Spanish in a Republican primary marked by anti-immigrant rhetoric when Donald Trump is standing right next to you is either bold, foolhardy, or disingenuous. While Cruz’s Spanish left something to be desired grammatically, his ability to think on his feet and respond in such an indignant manner was the crowning moment in a debate where the personal arguments rarely reached such a culturally nuanced level.

For most of the Latino population watching from Swarthmore, this quarrel likely did little to sway them towards either Cruz or Rubio. Gilbert Orbea ’19, who is a Cuban-American like Cruz and Rubio, doesn’t view either as representative of either his ethnicity or his political leanings. “Both candidates seem to be struggling with the balance of appealing to Latino voters while maintaining their hardline stances on immigration,” Orbea said. Rubio once represented the new face of the Republican party, the side that was supposed to take a softer stance on immigration and improve on outreach towards minorities. Cruz, while never hailed as the GOP’s savior like Rubio was, is nevertheless often brought up as a candidate who could put to rest the allegations that the Republican party is becoming exclusively for and by white Americans. Many of us can likely sympathize with Rubio, who hails from a humble immigrant community and nevertheless reached great heights. Many of us can also sympathize with Ted Cruz, whose struggles with questions and doubts about his Latinidad on such a big stage mirror that of our own internal struggles with the same topic. But much in the way that millennial women have defected from Hillary for Bernie, it’ll take more than a demographic similarity to earn our vote.
You can watch the whole exchange here: https://www.youtube.com/watch?v=JDXczRDJJ4c