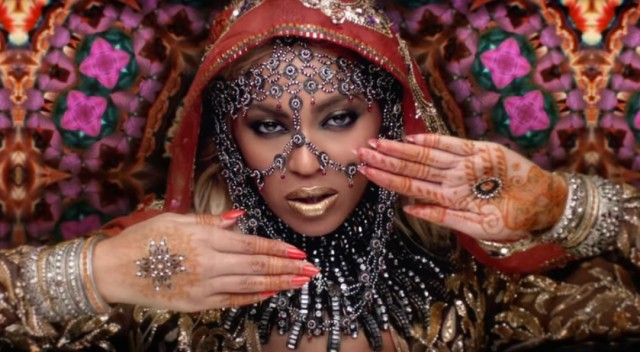 We love Coldplay. We’re both super stoked about their new song, “Hymn for the Weekend,” that came out this weekend. You guys should give it a listen if you haven’t. The music video, on the other hand, we have different feelings about.

To be honest, after watching it a few times, we’re still having trouble encapsulating our feelings about this video. On one hand, the video is extremely aesthetically appealing. They even included a Bollywood actress, Sonam Kapoor, even if it was only for a few seconds. The entirety of the video was filmed in India and they traveled around the country to get its various shots. We’re assuming Coldplay had the best intentions and we both firmly believe that this video wasn’t intended to offend or take advantage of India. But dear Coldplay, your video still makes us cringe a little.

Let’s start with the beginning: a peacock emerging from a temple in the jungle. Sadhus coming out of ruins with ash on their foreheads and mystic fog in the background. A kid dressed like Shiva, skin painted blue, and another Sadhu, but hey, this one is floating.

We both think it’s really important to touch on the use of religious people, symbols, and buildings throughout the video. In reality, streets in India aren’t always filled with kids dressed up as deities and Indians aren’t always celebrating some religious festival. As a side note, Holi is only once a year, not every time a music video is filmed. We get it, our religion and the colors associated with it are aesthetically pleasing and look great on your fancy cameras. We hope that one day, people will depict our religion and culture in a more realistic and respectful manner instead of fixating on only one festival, without explaining the significance or meaning of the celebrations we hold so dear.

Behold! Chris Martin running around the slums of India while little brown children covered in colors run around him as he sings. Kids dance and attempt to break-dance as Coldplay plays in front of an Indian crowd.

The only people that were featured in the video were poor brown kids and streetside entertainers, but guys, India has a far more diverse population than what was depicted. Yes, India has some of the poorest people in the world and that’s a huge problem that needs to be addressed, but we’re sick of the fact that the only depiction of the Indian population is that of extreme poverty. This makes India appear uncivilized in comparison to Western countries. The same goes with the fixation on mysticism and spirituality which created a trend where foreigners visit India to experience its “magic.” Contrary to popular belief, India is not a country made up of a bunch of crazy people who believe in magic. India is an old and historically rich country which led to a lot of diversity and variety in culture and religion. Today’s mainstream media chooses only to focus on certain parts of that, and in this case, that’s the mystical and impoverished aspects.

Little girls dressed up in their Bharatanatyam costumes and full makeup look into the camera as they dance. Beyonce does some ambiguous swirly hand movements. Kathakali dancers just hang out in bright colorful costumes.

This is what really got to us. Having both grown up participating in various forms of Indian classical dance, seeing Beyonce make some mock Indian, Bollywood-like hand gestures really upsets us. Dancers literally spend their whole lives perfecting these movements and artforms. Today, dance styles such as Kathak and Bharatanatyam constantly get ripped off for the parts that look the most visually appealing and “exotic” to Western eyes: lotus or swirly hands and “screwing the lightbulb.” Viewers will take these inauthentic dances at face value due to their portrayal in the video, while the trained actual dancers in another shot are given no real importance, entirely misrepresenting the reality of Indian dance. Furthermore, all Indian classical dance forms have deep religious roots and cultural significance that is rarely acknowledged by the outside world. Even the motion of folding your hands together and bowing down to someone (a.k.a Namastay) has a very deep meaning of saluting the inner soul of another individual. The artists in the video attempted to take the gesture out of its context and use it as a “goodbye” salute. So when Beyonce turned to the camera at the end and made that gesture, it was a small slap in the face.

We’re both really happy that Coldplay chose to showcase India in their music video and are excited to hear that the band tweeted that they want to return to India. However, this music video is filled with inaccurate depictions of things that qualify as beautiful for Western audiences and therefore end up only perpetuating the “exotic India” stereotype. There are beautiful places all over India, but it seems like India is only depicted from a tourist’s perspective, either showcasing impoverished places or things deemed “rich in culture.” It’s wonderful that India’s rich history and culture gets recognized, but we hope that this recognition does not morph into exotification. We hope that in the future, India, its people, and culture, are recognized as a place in its whole rather than broken into exoticized pieces.