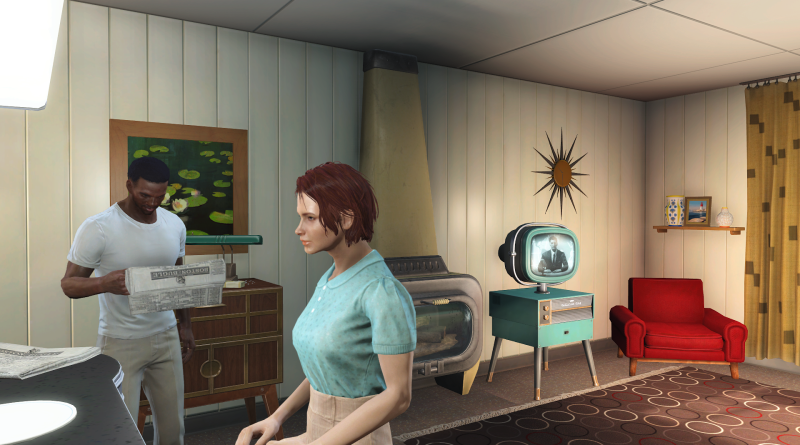 A few hours into Fallout 4 I was sneakily clearing out a group of raiders (common enemies) in a factory when one of the male raiders, searching for me, said, “Scared, just like a little bitch.” As I was filming a Let’s Play at the time, I said my immediate reaction aloud: “Don’t insult my gender!” This was both a moment of interesting player-character identification (as I am a man) and one of Fallout 4’s more disappointing gendered interactions. In many other ways, like the main story’s maternal focus, Fallout 4 provides an interesting subversion of typical female characters.

From its outset, I have loved that, for me, Fallout 4 has been about a woman trying to find her kidnapped child and avenge her husband’s death. This is an incredibly rare narrative in games; I cannot think of another game I’ve played where the main character is a mother. Fallout 4 quickly moves you from it’s opening scene of pre-war, familial life to the post-apocalypse. Within half an hour, my husband had been murdered and my son kidnapped, but I was given just enough time to sit in my suburban home for me to begin to begin identifying as a mother.

Courtney Taylor, the voice actor for the female main character, deserves as much thanks as the writing for my identification with my character, Chloe, whose name I chose. She displays just the right amount of desperation in her initial reactions with wastelanders in the post-apocalypse and just the right tinge of melancholy mixed with determination whenever her family is brought up. At one point Piper, a potential companion and romantic interest, asks Chloe for advice involving her distant relationship with her sister. Chloe responds, telling Piper that she should cherish her sister. Having been with Chloe through the loss of her family, I knew why she was saying this, and Taylor’s performance adds layers of depth that might otherwise be lost.

Female relationships have been a central part of my experience with Fallout 4. I met Piper, like anyone else playing Fallout 4, when I arrived at the game’s largest hub, Diamond City. She soon offered to accompany me out in the the post-apocalyptic remains of Boston. As she and Chloe explored and adventured together she started to open up about herself. I quickly fell for her quirky attitude, and despite the rather jarring nature of flirting with someone not long after my husband’s murder, I immediately began making romantic gestures. Chloe is bisexual, and this is presented as just another aspect of her character. Nothing else to it. Chloe and Piper’s romance progressed believably and I was invested in their relationship. I wanted them to be together. I loved having Piper around and hearing her journalistic take on the ruins of Boston. As fun as Bethesda RPG’s are, being invested in the relationship between two characters in one of their games was a first for me.

Romance isn’t the only interaction between Chloe and the other women of Fallout 4. I recently met another companion, Cait, the post-apocalyptic equivalent of a drug addicted MMA fighter. Her brusque apathy and propensity for violence present a stark shift from either Chloe or Piper, but Chloe’s budding comradeship with her is entertaining. I am invested in where their relationship goes and in seeing if Cait ever starts to open up. Her disapproval of Chloe’s altruistic nature is certainly making it difficult. However, that part of her makes her so interesting and memorable. Cait’s penchant for violence and drugs, combined with her willingness to travel through post-apocalyptic Boston with Chloe and slowly become her comrade is a strange, uniquely Fallout combination.

Despite including well-written female friendships and romantic relationships, the game still sometimes fails to be gender inclusive: all of a sudden Chloe will be fighting a group of raiders and they will hurl sexist, gendered insults at her. This dissonance is unfortunate. There is no need for Bethesda to recreate this specific form of sexism in their game and throw it in my face. Fallout 4 does not comment on the use of gendered insults, nor are the insults thematically important; they merely exist as set dressing.

It is also worth mentioning that after about forty hours of my playtime there are no significant women of color to speak of, which is an incredibly disappointing choice. With so many companions available, I don’t understand why Bethesda did not choose to write one who was a woman of color. There’s just no excuse for this. Chloe could have been a woman of color if I had chosen this during character creation, but having a well written woman of color in your game should not be dependent on the player’s character-creation choice.

This element of Fallout 4, player choice, potentially negates everything I have discussed thus far. A player could choose to play as a man, not interact with any of the female companions, and completely miss out on the nuanced women in this game. The divergent experiences possible in Fallout 4 make writing about it entirely specific to the way I played. Fallout 4 has badass, vulnerable, interesting women and represents relationships between women in nuanced ways – if you choose to experience them. To another player, Fallout 4 could be nothing more than a man travelling alone with his dog, shooting raiders, and collecting loot. I am unsure how to feel about the necessity of player choice to experience these women’s stories, especially because iit is difficult to comment on an experience other than my own. I am glad that, at least for me, Fallout 4 has been about Chloe searching for her son with her girlfriend Piper and comrade Cait by her side.

Hi there! My name is Kyle McKenney! I’m a part-time games journalist, YouTuber, and sophomore here! If you enjoyed this feature, follow me on Twitter, @TotallyKyle95, and check out my YouTube Channel, Games With Friends, for my Let’s Plays, including one of Fallout 4, my 2015 Games of the Year, developer interviews, and more!