Arts & Features » Making A Joke of A Joke Itself: Donald Trump on SNL 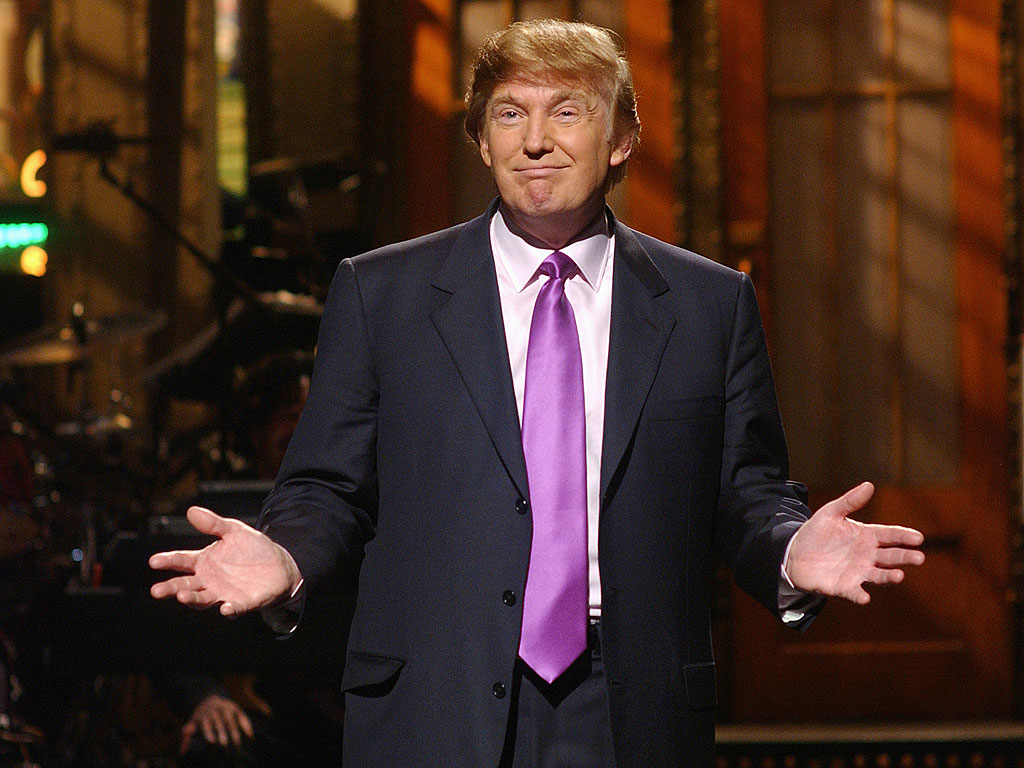 On Saturday, November 7, NBC experienced a ratings surge for their sketch comedy show, Saturday Night Live, because of guest host Donald Trump. Expectations were high for Trump. There was no telling what he would say on a live show that would probably parody him right in front of his face.

Trump, however, did not rise to these expectations (mainly, because it’s hard to make a parody of a man who is already a joke in and of itself). Instead of having something spontaneous and exciting happen during the show, everything on the episode felt scripted, presumably to paint a good light around Trump. By joining in on the parody of himself, it seemed as if Trump was hoping to paint himself in a better light through a fun and jokey acknowledgment of his own faults.

Honestly, Trump did not bring anything unique to SNL and the episode got a little laborious to watch. The highlight of the show, though, was the cold open. SNL did a parody of the MSNBC Democratic forum featuring Rachel Maddow (Cecily Strong), Martin O’Malley (Taran Killam), Hillary Clinton (Kate McKinnon), and Bernie Sanders (Larry David). The sketch made fun of the facts that: 1) O’Malley was entirely dismissed during the forum 2) Clinton changed her personality to fit different situations, and 3) Sanders exaggerated his allegiance to the American middle class and the minorities.

I must say that Larry David did a great impression of Sanders because he brought the right amount of righteousness and extremeness to the character. Kate McKinnon also did a hilarious interpretation of Clinton, because she portrayed the Clinton as an ambitious politician who will do/say anything to become president. The Trump impersonators, on the other hand, weren’t that funny because, like I said before, it’s tricky to satirize a man who is already a joke.

Here are the rest of the night’s sketches ranked from my most to least favorite.

David and McKinnon were hilarious as usual with their impressions of of Sanders and Clinton respectively. I’ve said enough about this sketch, so go watch it for yourselves.

Colin Jost and Michael Che delivered a solid Update during this episode with the right mix of news, commentary, and humor. Leslie Jones appeared during the update to give her view on gender. Her take on the changing gender roles boiled down to her belief of men becoming “man bitches.” Somehow her talk about gender roles transitioned to sex and her disapproval of men using the eggplant emoji to represent a penis. She passionately pointed out that she does not want any vegetables; she wants meat.

This sketch was basically would you would expect: the SNL cast making fun of Drake’s dance moves. Donald Trump appeared in this sketch and he was actually funny. He let loose with his dance moves and he horribly sang the line, “You used to call me on the cell phone.”

The SNL girls banded together for this faux music video of M.I.A.’s “Bad Girl.” The cast members became “bad girls” by doing “bad” things such as filling a water cup with lemonade and getting seated at a restaurant without the full party.

There was no link for this sketch because of copyright issues involving the music. It followed the woes of patriarch Mr. Crocker, the biggest loser of his household, who can’t sing, can’t cook, and has doubts about everything he does.

Trump was his usual self in this sketch because he just live tweeted mean things about the SNL cast while they were performing the skit. The only funny part came at the end when Trump tweeted “I love the Blacks.”

Nothing was really funny about this sketch because it was all about Trump’s character not getting his time to shine playing the laser harp.

If you ever wondered what America would be like if Trump was elected as president, then you can stop wondering and watch this sketch. In it, Trump magically fixes every problem in America and restored America’s reputation as having the best economy in the world.

Since SNL announced Donald’s Trump appearance as a guest, there has been a lot of controversy surrounding this invitation. Though NBC took a huge risk in inviting Trump, SNL didn’t include Trump in any creative ways beyond merely live tweeting or playing a laser harp. Nevertheless, SNL has been having a great season so far with all the great political material, so here’s to hoping that the next episode will use its guest hosts in funnier ways.