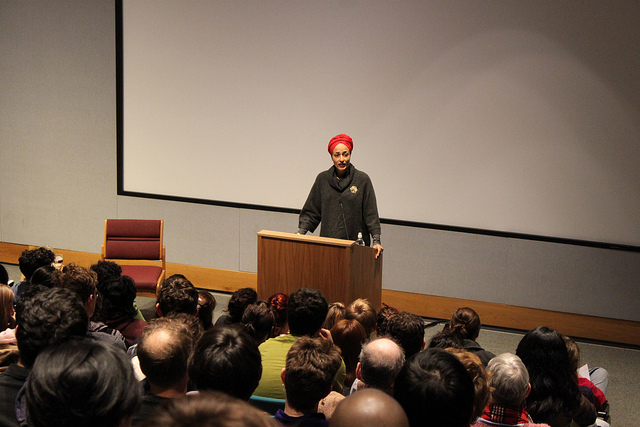 As we continually search for ways to improve gender inclusivity in Spanish, we have come up with a myriad of broad language such as Latino/a and Latin@. The most recent of these solutions is the term “Latinx.” In our opinion, the use of the identifier “Latinx” as the new standard should be discouraged because it is a buzzword that fails to address any of the problems within Spanish on a meaningful scale. This position is controversial to some members of the Latino community here at Swarthmore and beyond, but the other positions within the community also deserve to be heard. We are Latinos, proud of our heritage, that were raised speaking Spanish. We are not arguing against gender-inclusive language. We have no prejudice towards non-binary people. We see, however, a misguided desire to forcibly change the language we and millions of people around the world speak, to the detriment of all. Under the “degenderization” of Spanish advocated by proponents of words such as “Latinx” words such as latinos, hermanos, and niños would be converted into latinxs, hermanxs, and niñxs respectively. This is a blatant form of linguistic imperialism — the forcing of U.S. ideals upon a language in a way that does not grammatically or orally correspond with it.

The term “Latinx” is used almost exclusively within the United States. According to Google trend data, “Latinx” came into popular use in October of 2014 and has since been widely popularized by American blogs and American institutions of higher education. The term is virtually nonexistent in any Spanish-speaking country. This is problematic for many reasons. It serves as a prime example of how English speakers can’t seem to stop imposing their social norms on other cultures. It seems that U.S. English speakers came upon Spanish, deemed it too backwards compared to their own progressive leanings, and rather than working within the language to address any of their concerns, “fixed” it from a foreign perspective that has already had too much influence on Latino and Latin American culture. The vast majority of people in Latin America from personal experience, would likely be confused and even offended by this attempt to dictate for them how their language is to be structured and how they ought to manage their social constructs. It is interesting to observe how many “Latinx” activists become outraged when a non-Latino person wears traditional Latino costumes such as sombreros without understanding the significance of what they are wearing when they themselves participate in a form of reverse appropriation. To be clear – this is not to say these Latinos are detached from the culture, but rather taking American ideals and social beliefs and inserting into a language that has widespread use in places outside of the U.S. Rather than taking from a culture or people a part of them without respect or reverence for it, this reverse appropriation aims to put into a culture a part of one’s own beliefs. This is not the forced and unwarranted taking of culture but rather the forced and unnecessary giving of incompatible segments of U.S. culture.

Perhaps the most ironic failure of the term is that it actually excludes more groups than it includes. By replacing o’s and a’s with x’s, the word “Latinx” is rendered laughably incomprehensible to any Spanish speaker without some fluency in English. Try reading this “gender neutral” sentence in Spanish: “Lxs niñxs fueron a lx escuelx a ver sus amigxs.” You literally cannot, and it seems harmless and absurd until you realize the broader implication of using x as a gender neutral alternative. It excludes all of Latin America, who simply cannot pronounce it in the U.S. way. It does not provide a gender-neutral alternative for Spanish-speaking non-binary individuals and thus excludes them. It excludes any older Spanish speakers who have been speaking Spanish for more than 40 years and would struggle to adapt to such a radical change. It effectively serves as an American way to erase the Spanish language. Like it or not, Spanish is a gendered language. If you take the gender out of every word, you are no longer speaking Spanish. If you advocate for the erasure of gender in Spanish, you then are advocating for the erasure of Spanish.

What then, is the solution if not “Latinx”? It may surprise you to learn that a gender-neutral term to describe the Latin-American community already exists in Spanish. Ready for it? Here it is: Latino. Gender in Spanish and gender in English are two different things. Even inanimate objects are given gendered -o/s and -a/s endings, although it is inherently understood that these objects are not tied to the genders assigned to them. In Spanish, when referencing  groups, we only use the feminine ending when referring to an exclusively female group. On the other hand, when we refer to groups using the masculine ending, the group could either be exclusively males or a mix of people. For example, when someone says “los cubanos” an English speaker may instinctively interpret this as “the male Cubans,” but a Spanish speaker simply hears “the Cubans.”  In fact, the only way to refer to a group that is not exclusively female in Spanish is by using the masculine ending. Therefore, according to the grammatical rules of Spanish, the term “Latinos” is already all-inclusive in terms of gender. For those that want the singular form of “Latino” without the association with gender, alternate forms exist — one can state their ancestry (“soy de Cuba/Mexico/Venezuela/etc”) or “soy de Latinoamerica”. Ultimately, the problem here is that “Latinx” does not fit within Spanish, and never will. X as a letter at the ends of words in Spanish is unpronounceable, not conjugatable, and frankly confusing. These alternate options both respect those on the non-binary spectrum and respect the dignity of the Spanish language.

We understand that some people may still support the term “Latinx”. Ultimately, we will never attempt to force anyone to personally define themselves in any way. If after reading this article anyone still feels that calling themselves “Latinx” instead of any other term brings them more happiness, we will respect that choice. However, we are strongly opposed to and cannot support this particular terminology becoming the new norm or creeping any further into a language it does not belong in. Some may be put off by gender in Spanish. But we are offended by the attempted degradation of our language at the hands of a foreign influence. “Latinx” undoubtedly stems from good intentions but is ultimately also clearly representative of a poorly thought out and self-defeating execution as well as a lack of respect for the sovereignty of Spanish.