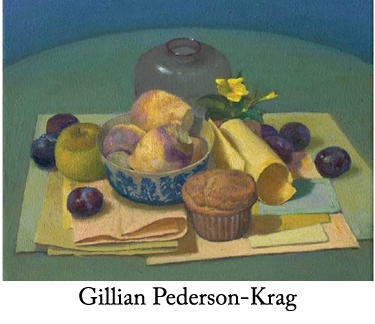 Gillian Pederson-Krag, the current Donald J. Gordon Visiting Artist in Swarthmore’s List Gallery, took a careful survey of the room before beginning her talk. From the back row, I watched her, as well, observing her petite form garbed in the classic black of an artist, an air of composure and elegance. Simply excited for the stillness of the room after a four hour chemistry lab, I was unaware of the nostalgia and warmth which Gillian and her paintings would invite.

Now in her seventies and with an extensive body of work, Gillian chose to share her earlier pieces with us. She explained this choice to the young audience, “I think some of my feelings back then are similar to yours now.”

For instance, as a senior at the Rhode Island School of Design, Gillian described how she felt burdened by two anxieties. During a time when abstract art dominated the creative scene, it was hard to separate oneself from the excitement of this movement. She recalled how everyone tried to be like the painter Willem de Kooning, known for his aggressively visceral abstractions of women. Even her then boyfriend claimed to smoke Camels without filters because “that was how de Kooning did it.” In an environment where structured technique seemed almost taboo, Gillian wondered, “Could I know what I needed to know to be a painter?”

On top of her doubts of her representational abilities, Gillian felt drawn to the works of artists who were not of her time, such as Caravaggio, Vermeer, della Francesca, Vuillard, Morandi, and other artists of the past who each were guided by their own unique visions. And so she asked herself, “Would it be worth my effort when they have already done so much?”

This concern seems to be one shared by Swarthmore students, whom I’ve heard many times expressing their desire to ‘make a difference’ or to create something ‘new’ and ‘meaningful’. Just last Sunday at the weekly Daily Gazette meeting, we were all prompted to share our greatest unfulfilled dream and of course, someone shared her hope to create something new that people would appreciate. Gillian’s journey as an artist is very relevant to the daunting task of being original, of using our talents as students to ‘change the world,’ or in the very least to leave some kind of unique impression.

As an undergraduate student, Gillian created a painting of a boy among towering trees and a pink sky. Although certainly not realism, the piece allowed her to realize that she wanted to do representational work. The piece remained hidden from her abstract-centric professors and peers. When she began graduate school at Cornell, however, she strove to teach herself how to create representational paintings. Her work soon unfolded as an extensive series of ethereal nature scenes.

“I wanted to make sure I had some kind of world within me,” Gillian explains. The pursuit of these imagined landscapes stands testament to her value of personal art. The next step in her journey was at the Yaddo artists’ colony located in Saratoga Springs, NY. Here, she drew particular inspiration from the color master Pierre Bonnard, a French post-impressionist artist. For Gillian, color seems to come out of feeling; it is something that cannot be planned but instead springs from intuition.

“When you’re working with your mind, you question yourself and your work. When you work with feeling, you take a chance with color!” Gillian continued. One piece she completed at Yaddo was finished in a lovely wash of blue. The composition was centered around a small bottle with flowers on a table bathed in lavender cross-hatch shadows from a nearby window. As with this work, all of Gillian’s paintings convey a lovely calmness and familiarity.

Gillian underwent another formative experience when the chair of the Art Department at Cornell gave Gillian a statuette in the style of a Tanagra terra-cotta figurine, characteristic of fourth century B.C.E. Boeotia. Like the one given to her, these figures often are women wrapped in elegant drapery. For Gillian, the little statue invited infinite possibilities and seemed to be the “deputy of a world hidden within her.” She began to incorporate this object in her still-life paintings.

“You have to find your own special object which represents your inner world. Such objects have a quality of eternity,” Gillian shared. Gillian likened her connection with the figurine with falling in love, “you’re ready to do anything for the sake of the object.” For instance, whereas she before shied from the task of painting silk, a simple placement of the figurine in front of a bolt of the fabric gave her the incentive to paint this complicated subject.

Not only did the Tanagra serve as her new muse, but it empowered her to claim her identity as an artist. Her work with the figurine helped her to realize that she could in fact do art and contribute her own unique vision. It was satisfying to hear the resolution of her prior self-doubt as an undergraduate. Again, Gillian’s discoveries as she made a place for herself in the art world prove useful to the college-aged young adult; inspiration will arise in the unexpected, and once it does present itself, we must surrender to its creative potential.

The Tanagra figure would later be replaced by paper, paper so sunny and ephemeral, and then by colorful landscapes, and finally figure paintings. Interestingly, the style of Gillian’s landscapes and her consistent exploration of color align with the bright painting of a boy and trees she so long ago created in secret while at RISD. She flipped back to the slide of this piece, and proceeded to show how other artists, like Arthur Rackham, known for his Alice in Wonderland illustrations, and Georges Seurat, the French Post-Impressionist pointillism genius, created pieces as children in a style which would later become their signatures.

After listening to Gillian’s story and seeing her work, I think maybe the search for originality should be put to rest; while it certainly seems intimidating to yield to the unknowns of life, Gillian reminds us to not compromise our creative intuition for the sake of commercial or social success. In doing so, we might just find our own Tanagra figure and expressive color palette.

Gillian Pederson-Krag’s paintings are currently on exhibit at the List Gallery. The show is open to the public from November 5 until December 13; I think all creative types in need of inspiration would benefit from stopping by!