Arts & Features » Imagining Immigration: Entering Into the Lives of Migrants of the French-Speaking World 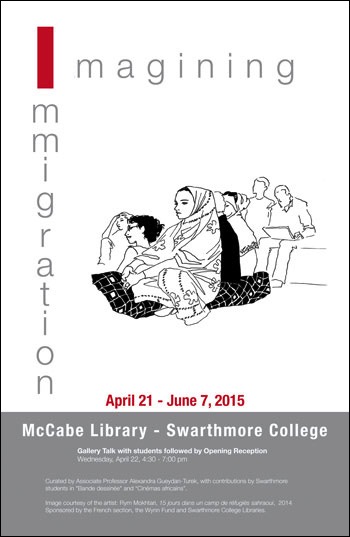 Curated by Professor Alexandra Gueydan- Turek, an Associate Professor of French Studies and Francophone Studies, with contributions from students in Bande dessinée and “Cinéma Africains,” Imagining Immigration is a current collection of works exhibited in McCabe Library from April 21 to June 7 that depicts the diverse figures of migrants in the French-speaking world.

Beginning in the 1980’s, this immigration has been the material for artistic productions that has ultimately given voice to marginalized immigrant populations. Central to this movement and displayed throughout the library is the French-Belgian comic form bande dessinés that holds the unique position of being both massively consumed and highly revered. This art form alone does not give voice to these immigrant communities, but the creation of the autobiographic, a new structure that combines the visual element of the bande dessinés with the personal touch of autobiography, brings intimate moments into the public sphere. Through the autobiographic, as well as a few other art forms, Imagining Immigration gives us insight into the multiple experiences of immigrants from the French-speaking world that also resonate with the lived experiences of immigrants in our own nation today.

The similarities between the immigrants of the past and present are first seen in the exhibit’s section “The Dream and the Reality,” which examines the realization that immigrants must come to terms with upon arriving to their destination: that their dreams for their new lives often do not align with the reality of their new country. From one panel to the other in Alberto Jimenez’s Arrivé en France, we move from a scene with a glossy-eyed young boy star struck with the potentials of his new country to a scene of that same boy living under deteriorating and cramped living conditions. The dreams and hope that he once held for his new country begin to fade. For many immigrants, the potential of the new country is imagined as a stable life for themselves and an even better future for their children. Yet, when they finally arrive in the new country, they face enduring racism and discrimination and poor living conditions in both the domestic and working realm.

The exhibit shows that even when in their new countries, the relationship between immigrants and their home countries exists in a way that brings both a nostalgic desire to return and traumatic memories. For many immigrants, returning to their home country is not possible due to economic or political reasons. Still, they continue to think of their mother country in a static state of nostalgia. They hold onto an imagined picture of their mother country at the time of their departure rather than the country that has continued to change over the time that they have been gone. Yet, this “myth of return,” this quasi-hope of returning to the country that they left, contradicts the feeling of trauma that are sometimes experienced by thoughts of the past. As the exhibition puts it, their connection to their old home is characterized by “both beautiful and violent childhood memories of the mother country.”

In addition to illuminating the conflicting feelings immigrants have regarding their relationship to their home country, Imagining Immigration also brings us closer to the conflict of identity that immigrants experience, both in their personal lives and in their artistic expression. In terms of their own individual self-identity, immigrants are forced to ask themselves “Who am I?” as they consider their connection to both their mother country and the country that they now live in and how those two places ultimately shape who they are. This internal conflict poses the choice of accepting their relationship with two countries as part of their identity or adopting a new identity created by their surrounding culture. Immigrants often want to accept their own home culture, while simultaneously wanting to reject it because it is the very thing that sets them apart.

Ultimately, their own definition of self shapes their artistic expression and their art then becomes a reflection of how they negotiated these two conflicting identities. We see this self-conscious decision to shape art as a reflection of one’s own immigrant background in Morvandiau’s D’Algérie, where he uses different aesthetics in his portrayal of his family history to draw attention to his understanding of his family’s diverse identities. His portrayal of himself in his work allows the piece to work as a representation of his self-definition as it acknowledges and embodies these differing identities of self.

By providing us with these autobiographical narratives, Imagining Immigration gives voice to a population of people that the exhibition addresses as a people whose voices have been muffled. As the section Imagining the Clandestine says, “Everybody knows that illegal immigrants exist, but we hardly ever see them; and those that do see them do not consider them as human beings.” The immigrant population in Europe, while often forced to endure violations of basic human rights, lacks the visibility needed to place these injustices at the eye of the public. Yet even once these abuses are made public, people that are aware of the immigrant population often view them as less than human beings, under the guise that they are not full, legal citizens.

Personal narratives like those in Imagining Immigration work not only to raise the visibility of the immigrant community but also to humanize a group of people that has often been viewed as deserving less than the full citizens of their respective countries. In sharing these intimate moments of the immigrant experience, Imagining Immigration ultimately reshapes our understanding of the lives of immigrants based on their own, genuine narratives rather than mainstream portrayals that are we are usually offered.