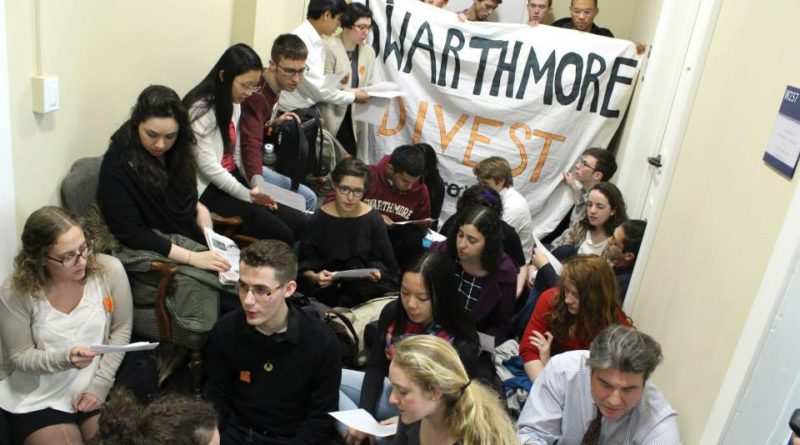 Mountain Justice’s sit-in outside the college’s Finance and Investment Office stretched into its second week today. So far, the sit-in has garnered national media attention, a response from Interim President Constance Hungerford, and a letter endorsing the action and calling on the Board of Managers to re-engage with divestment from Christiana Figueres ’79, the executive secretary of the United Nations Framework Convention on Climate Change. This afternoon, Bill McKibben, environmentalist and founder of 350.org, which describes itself as the first planet-wide grassroots climate change movement, will join the sit-in and lead a rally in Upper Tarble.

The sit-in is both the first extended one of its kind for fossil fuel divestment and the largest in the movement to date. Its participants ask that Chair of the Board of Managers Gil Kemp ’72 and Board Investment Committee Chair Chris Niemczewksi ’74 “return to the negotiating table and agree to end the College’s investments in a rogue industry that violates Swarthmore’s Quaker values and recklessly imperils a just and sustainable future for our generation,” according to Mountain Justice’s press release on the sit-in.

The sit-in began on Thursday morning, when 43 students, alumni, and professors entered the Finance and Investment Office. The Guardian broke the news of the action shortly after, and, several hours later, Hungerford made a statement to sit-in participants and sent an email to students, faculty, and staff.

In her statement, Hungerford wrote, “On behalf of the Board and the College, I want to tell you that we hear you. We are listening to your voices, and to all of the voices of our students, faculty, staff, and alumni. We are considering what we hear thoughtfully. We respect your decision to engage in peaceful protest.”

Hungerford went on to clarify that the Board of Managers had made a consensus-based decision not to divest two years ago after careful consideration and analysis. But, Hungerford said, “The Board is already planning to continue this discussion at its meeting in May.”

She then explained that sit-in participants’ desire to meet with Kemp and Niemczewski was currently untenable, as Kemp is engaged with philanthropic work in Asia. Additionally, she said, even if Kemp or Niemczewksi were available, “neither could unilaterally change a Board decision. Following our Quaker tradition and our governance procedures, that requires a consensus of the full Board of Managers. So we all need to look forward to the May meeting for the full board to gather and deliberate.”

Hungerford added that the college cares deeply about climate change and its effect on the future of the planet.

“The Board has been addressing climate change at each meeting this academic year, and is prepared to make significant commitments,” she said, citing the Board’s December allocation of  $12 million to carbon neutrality for the planned Biology, Engineering and Psychology building.

Stephen O’Hanlon ‘17, a Mountain Justice member, said that sit-in participants were particularly encouraged by Hungerford’s response. O’Hanlon noted that the announcement that the Board would discuss divestment at its May meeting came just months after Board members had declared the conversation on divestment closed, and he called Hungerford’s statement “a major victory.”

On Sunday, McKibben announced that he would join the sit-in and lead a rally calling on Swarthmore to divest. The next day, Figueres sent a letter to Kemp, Niemczewski, and the student body,  endorsing the sit-in and calling for the two Board members to divest.

“Simply put, we are running out of time to do the right thing,” Figueres wrote. She then elaborated on the risk-return analysis of fossil fuel investments and encouraged Board members and students to “support and encourage” the transition away from fossil fuels.

“Using the power of our capital, be it small or large, we can drive innovation to promote climate change solutions in a planned and sensible manner,” Figueres wrote. She concluded, “It is financially prudent to be on the forefront of this transition … As Executive Secretary of the United Nations Convention on Climate Change, I see that history is calling on all of us to smoothly usher in the next phase of global economic development. Swarthmore cannot determine the pathway of global endowments, but it can protect its endowment and play its part in history.”

O’Hanlon was enthusiastic about Figueres’ and McKibben’s contributions to the sit-in. “The endorsements from Bill McKibben and Christiana Figueres further exemplify the untenable inconsistency between Swarthmore’s investments and values,” he said.

In the first week alone, around a hundred students and professors have joined the sit-in and participated in a series of teach-ins, workshops, planning, and discussion meetings. Mountain Justice considers the action successful so far. O’Hanlon was optimistic that the Board would come around. “We fully expect that our Board will join us in building the path towards a just and sustainable future,” he said.

In a statement emailed to the Phoenix about the sit-in, Kemp and Niemczewski echoed Hungerford’s respect for the sit-in and said that they were paying close attention to the range of community members’ views.

“We want to affirm our respect for Mountain Justice’s decision to peacefully protest, having peacefully protested ourselves back in the day,” Kemp and Niemczewski wrote. “Of course we are also respectful of a wide range of community members’ views we have been hearing, including that of Christiana Figueres. We are listening very carefully.”

Kemp and Niemczewski clarified that the Board had already decided, after a discussion in February, to discuss investment options at the May meeting.

“Among other considerations, the Board will need to decide if it is willing to change the Board’s guidelines which prohibit the use of the endowment to express opinions on social issues,” Kemp and Niemczewksi wrote. “Both by virtue of our strong Quaker tradition, and our governance model, our board makes its decisions through consensus. So in order for anything to change, a consensus of the Board must be reached.”

Kemp and Niemczewksi added that the Board would also discuss at its May meeting a full range of initiatives from the recent Sustainability Charrette, including proposals concerning renewable energy, potential investment strategies, and green building standards.

“We have an ambitious agenda for May and we are confident that the results will prove meaningful in our efforts to do part in stemming climate change,” Kemp and Niemczewksi wrote.

Mountain Justice and sit-in participants hope that Kemp and Niemczewski will work with them in the coming weeks in order to ensure a productive and serious discussion at the May Board meeting, according to O’Hanlon.

“Divestment can’t happen overnight, but that’s no reason to do nothing. The urgency of this crisis requires us to gradually but deliberately end our investments in fossil fuels,” he said. “Our sit-in and our campaign have put Swarthmore into the international spotlight. We might just be a small college in Pennsylvania, but at this moment we have a chance to make history, to take a big step towards climate justice in the 21st century.”

The sit-in is the latest escalation in a series of continuous activism and a set of on- and off-campus victories on the part of Mountain Justice.

In September, the Rockefeller Brothers Fund, a philanthropic institution which controls nearly $900 million in assets, announced that it would divest from fossil fuels. The Fund’s announcement brought the total amount of money pledged towards divestment by various institutions and individuals to more than $50 billion.

In November, the college’s largest financial consultant, Cambridge Associates, announced that it would provide a fossil-free portfolio option for institutions that wished to divest. Cambridge advises 71 percent of the largest college and university endowments, and is the highest-paid financial advisement firm hired by the college.

The next month, students delivered the signatures of the more than 800 students who had signed on to Mountain Justice’s petition calling for divestment to the Board of Managers. The total number of signatures has since risen to nearly 1,000, and around 1,100 alumni and faculty have signed the petition as well.

In February, five members of Mountain Justice met with five members of the Board of Managers to discuss a proposal for divestment. The proposal asked that the Board of Managers commit to full fossil fuel divestment by 2020, the same year which the United Nations says that global emissions must peak in order to avoid catastrophic climate change. Members of Mountain Justice developed the proposal after consulting with Vice President for Finance and Administration Greg Brown and Chief Investment Officer Mark Amstutz.

At the beginning of March, following the Sustainability Charette, Gregory H. Kats, a longtime investor, penned an opinion piece for the Daily Gazette discussing what he termed the financial advantages of divestment. Kats has served as Managing Director on the investment committee of a fund which controlled $500 million a year.

Mountain Justice’s sit-in is just the first in a wave of historic, coordinated, sustained action by divestment campaigns on campuses across the country. The actions will culminate with Harvard Heat Week in April, a week of action calling on Harvard to divest from fossil-fuels.