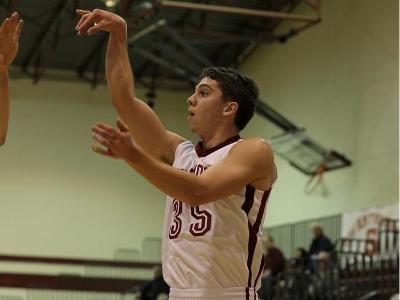 Monday was a momentous day for Karl Barkley ‘15: it was the last day of his 9-year basketball career. As of Monday, Karl had made 169 3-point goals, making 62 of those shots just this season, averaged 9 points a game, and has won Conference Player of the Week twice, all while maintaining a place on the Centennial honor roll with a high record of academic achievement.

But numbers like these mean little to Barkley. One of the truest talents of Karl Barkley was not only his ability to make 3-pointers, but his ability to combine his sport with a passion for serving others. This altruism has garnered widespread attention: on February 10, Barkley was named to the 2015 Allstate NABC Good Works Team in recognition of his “impressive commitment to giving back to their communities and positively impacting the lives of those around them.” As a part of this honor, the NCAA Men’s Final Four send all the members of the Good Works team to Indianapolis to participate in the NCAA Coach’s Convention and a community service project which has yet to be announced. On March 3, Barkley was also selected for the Centennial Conference’s all-sportsmanship team.

“[Service] is just something that more goes in line with our standards as a team and what we expect from ourselves and the people we want to be,” Barkley said. “You definitely have your own position of privilege and to have the opportunity to give back is grounding. It puts things in perspective.”

For Barkley, basketball has always been inextricably intertwined with service. When the Men’s Varsity basketball coach, Landry Kosmalski, came to Swarthmore, he began the tradition of requiring each player to do 10 hours of community service a year, which Barkley exceeded every semester. As captain, it was Barkley’s job to find those community service opportunities. For example, the team regularly teaches 4th and 5th grade gym classes at local elementary schools. “Having a college basketball sweatshirt on gives you a certain amount of presence when you’re working with kids,” Barkley said. “You walk in there with a Swarthmore basketball shirt on and these kids don’t know that we play in front of like 150 people a game. They think we’re rockstars.”

This service is in part what got Barkley more involved on an individual level. He volunteers at the Arch Street United Methodist Church in Philadelphia to feed the homeless on Sundays, helped to create a viable business plan for the Chester Community Improvement Project to begin a solar installation subsidiary, and also serves on the Swarthmore Athletics Advisory Committee (SAAC). “The people at my church love that I come and go to community service stuff, so they put a Swarthmore basketball schedule up in the lobby of the church. So we had a ton of people from the church come to our games,” Barkley said. “Through community service you build these networks, and I don’t know if a member of my church had ever been to a game before, but now they’re probably going to come because they know the underclassmen I’ve brought to other things. So I think community service really helps to foster crossover between your different networks.”

Though Barkley is involved with a lot of off-campus projects, at Swarthmore he is most well known for his work with making athletics more sustainable. This general field is known as “sports greening” and is a concept so new it doesn’t even have a Wikipedia page yet.  On the professional level, sports greening was originally pioneered in part by the Philadelphia Eagles. Their stadium, the Lincoln Financial Field, has over 11,000 solar panels, making it 100% energy independent, and can actually add electricity to the power grid.

Barkley got involved with athletic sustainability his sophomore year, when the Men’s Soccer coach, Eric Wagner, gave a talk on sports greening to SAAC, which Barkley was a member of. “For a lot of people, [sports greening] is something that they have never heard of and it’s a shame because so many people tune into sports that you have the ability to promote a message if you want to,” Barkley said. “I think it’s becoming more popular and more fans are realizing the positive PR element in it.”

Barkley organized Swarthmore’s first big sports greening event, the “Zero Waste Game,” a women’s lacrosse game which was held on April 5, 2014. The game featured homemade concessions served on compostable servingware, with “zero-waste ambassadors” standing by trash cans to ensure everything was disposed of properly. “Our goal was to minimize waste and to raise awareness about the fact that […] it’s possible to have a sporting event without creating waste,” Barkley said. This year, there are plans for two more zero-waste games later in the spring.

Now that he is graduating, it is up to Barkley to mentor the next generation of sports greeners. Right now, Barkley has a team of at least 15 freshman who are now in the process of establishing goals for the spring semester. Currently, the group aims to send two teams of people to green the Fencing nationals that Swat is hosting in Philly. They also want to make a presentation to the Athletic administration to recommend no-lights training sessions, which would involve each Swarthmore team to have a morning practice at least once every three weeks to conserve energy and promote good habits.

When asked what his last piece of advice was for the freshmen on his team, Barkley said, “Push on with service. Do things other than sports. Don’t be solely identified by your role on the team. Continue to challenge the stereotypes surrounding student athletes.” Though he won’t be playing basketball anymore, Barkley will be walking off the court with his jersey, 9 years of memories, and a truly inspiring legacy.