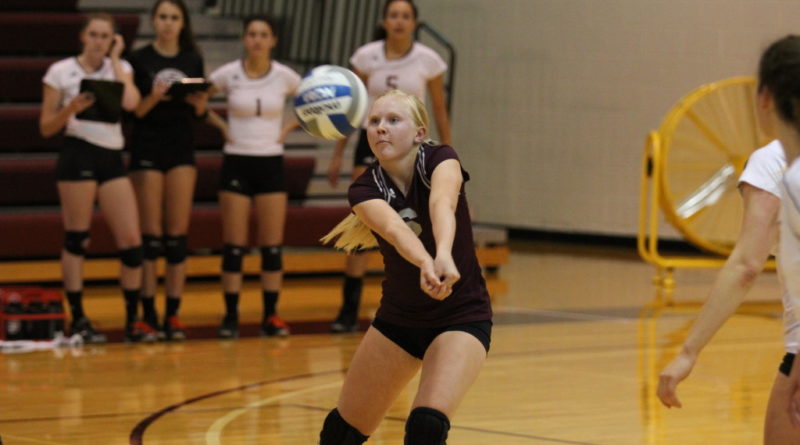 Facing a second place Muhlenberg team, Swarthmore continued to prove that it is capable of playing lights out volleyball, no matter who the opponent happens to be. The Garnet won Wednesday night’s match in straight sets to bring their Conference record to a perfect 8-0. The team got contributions across the board, with stellar performances from all positions.

After winning the first two sets convincingly, Muhlenberg played the last very tough. The Mules rallied to bring the set to within two points, but the Garnet were able to rally and finish off the game, in large part due to a beautiful dig by Madison Heppe ’16. Her full extension save kept the point alive and allowed to team to finish off the volley. Kate Amodei ’15 followed up the point with an ace and Sarah Wallace ’18 put the game away on a kill.

But it was a team effort, as it has been all year. Malia Scott ‘18 finished the game with a double-double and while DuBois contributed 18 assists. Chastity Hopkins ‘15 was big at the net with four blocks and an added four kills.

In previous action, the Garnet have continued to play outstanding volleyball, both within the conference and against quality out of conference opponents. Swarthmore’s four set win over McDaniel College on October 11, along with a straight sets victory the same day over Penn State Berks, capped a perfect week for the team.

In the McDaniel match, Wallace, who has stood out all season for Swarthmore, had perhaps her best match of the season, recording 25 kills. Wallace’s talent is evidently turning heads, as both the conference and the ECAC South region named the outside hitter Player of the Week.

The Garnet will host Lycoming College on Saturday in nonconference action, starting at 1 p.m in Tarble Pavilion.

Swarthmore had its two match Centennial Conference winning streak snapped, falling to Muhlenberg 1-0 in overtime in Wednesday night action at Clothier Field. Playing through a cold, driving rain, neither team managed to score in regulation and a 94th minute golden goal Carly DeNigris clinched the victory for the Mules.

The Garnet lost despite a relentless individual performance by forward Hannah Lichtenstein ’17, who fired off nine of Swarthmore’s 22 shots and eight of its 12 shots on goal. Despite their impressive shot totals, however, the Garnet were stymied time and time again by Muhlenberg keeper Jen Mermelstein.

The loss drops Swarthmore to 4-4 in conference, meaning that with two matches left to play, the team is squarely on the playoff bubble. The top five teams in the conference qualify for the playoffs and in order to finish ahead of Ursinus and McDaniel, the Garnet will likely need to win their last two matches. Fortunately, Swarthmore will close out its season against Tri-Co rivals Bryn Mawr and Haverford. The two teams are currently a combined 3-11-1 in conference play, meaning Swarthmore is well-positioned to get the wins it needs to qualify for the playoffs.

After a 1-0 loss to first-place Gettysburg on October 11 left the Garnet temporarily outside of the playoff picture, Swarthmore rallied to play its best soccer of the season last week. Emma Sindelar ‘15 stole the show last Thursday’s 5-0 win over Ursinus. The forward recorded Swarthmore’s second natural hat trick of the season and in the process, broke the college’s goals record.

In a must-win match on Saturday, Lichtenstein  provided all the offense Swarthmore needed, scoring twice to lead Swarthmore to a 3-1 victory over McDaniel. Keeper Reba Magier ’16 and Swarthmore’s defense remained nearly impenetrable in both matches and in what is without question a recipe for success, Swarthmore has allowed less than a goal per game this season, including just six in eight conference matches.

The Garnet travel to Montclair State on Saturday for a non-conference match.