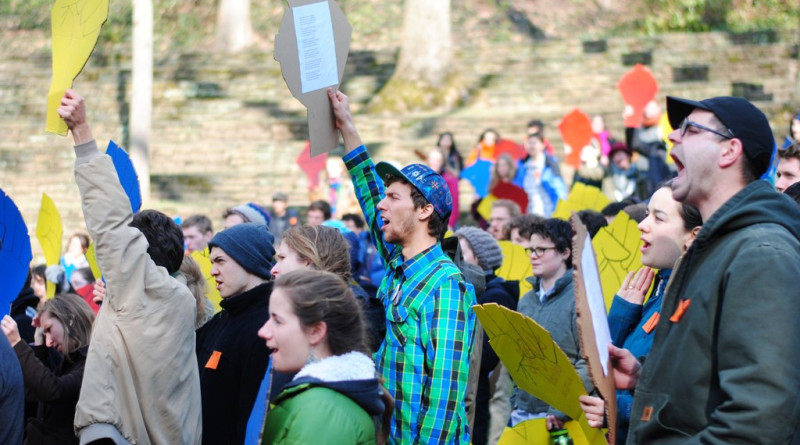 At 12:58 PM in the streets of midtown Manhattan, the four hundred thousand people around me ceased their cheers, put down their signs, stopped their march, and fell perfectly silent. Countless rows of us gazed mutely ahead, hands clasped above our heads. After the chants and yells of the past two hours, the quiet was unnerving. A crowd of almost half a million had gathered, and no one spoke a word.

We were silent to honor and remember those most affected by climate change and the extraction of fossil fuels, some of whom were marching at the front of our four-mile long column. They were survivors of Hurricane Sandy who had watched their homes flood as they took refuge in the upper stories. They were indigenous people who are fighting against oil and gas pipelines slated to be run through their reservations. They were residents of the coast threatened by the prospect of rising sea levels, or of towns with coal plants that cause high rates of asthma, birth defects, and cancer.

After two minutes of eerie silence, a rumbling yell rolled down Central Park West toward the student section. It grew louder and louder as more people joined in, screaming at the top of their lungs. Within a few seconds, I was swept up in the middle of an enormous roar.  That was the moment when I realized how huge the People’s Climate March was. Hundreds of thousands of people united their voices into a single shout, demanding that something be done about the climate crisis. What was remarkable to me was how varied all of these voices were.

The people that had congregated in New York were affiliated with over three thousand organizations from around the world. They came from religious groups, universities, LGBT communities, indigenous tribes, labor groups, and the boroughs of New York. Some of them advocated divestment, others solar power or food justice. Still others took their stands against fracking, nuclear power, capitalism, or oil pipelines. In these particulars, I agreed with some and disagreed with others, but that was unimportant. We were united in our determination that our shout against climate change be heard.

For the rest of that day, I felt that I was a part of something much larger than myself. In New York alone, there were four hundred thousand people marching together, and as we marched through the streets, we walked past huge screens displaying some of the other 2,600 partner demonstrations around the wold. We were marching with the people of Madrid, Sydney, New Delhi, and Bogota. Before Sunday, I believed that not enough people cared about climate change to attract the attention of policymakers and politicians. Now, after hearing countless people from all over the world raise their voices together, I am far more hopeful.

Some of this hope stems from what I have experienced here at Swarthmore. Shortly after arriving at Swat, I began attending Mountain Justice meetings, intrigued by the divestment movement’s direct assault on the institutions responsible for global warming. Once I learned that Swarthmore Mountain Justice was the first ever fossil fuel divestment group, my interest grew. The people I met at Mountain Justice meetings were proof that individual people could make a difference. They started the movement in Kohlberg 114 and grew it far beyond the Swarthmore bubble to towns, colleges, and churches around the world. Desmond Tutu endorsed it. Stanford has divested. The Rockefeller family has divested. And in New York, I saw hundred of students wearing orange squares, proclaiming their support for the divestment movement.

After seeing the widespread acceptance of divestment at the climate march, it was odd to realize that Swarthmore College has not fully embraced the movement — the very place where it originated. The Board of Managers has argued that divesting would only be a symbolic gesture, but in doing so they miss the point of the divestment movement. The movement is not about the divestment of any one institution, but about the collective action of many. And many institutions are acting. Worldwide, over eight hundred organizations have divested from fossil fuels. A few years ago, if the divestment movement had a voice, it would have been a murmur. Now it is growing to a shout. If Swarthmore joins, it will add its voice to a cry that has begun to attract the attention of presidents, CEOs, and prime ministers, proclaiming that we can no longer afford to support companies that profit from the destruction of our earth.