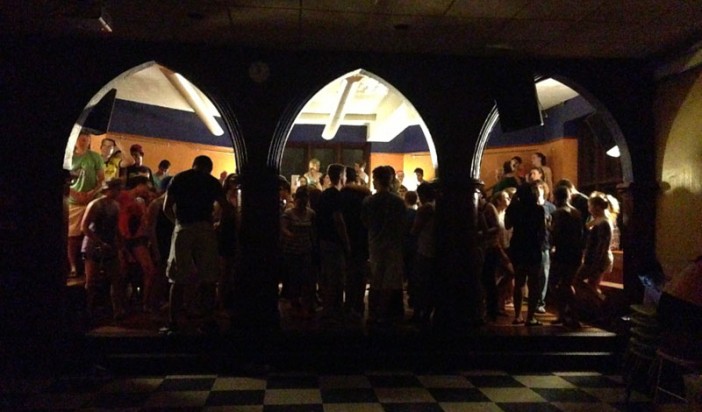 Complicating tonight and future Pub Nites, administrators have told seniors that they may no longer collect money from students attending the traditional Thursday night event.

The decision to ban Pub Nite fundraising began with an announcement by Provost Tom Stephenson that the college had created a fund to pay for senior week activities. Traditionally, the senior class had raised funds for their senior week through Pub Nite.

“We have allocated college funding to cover the cost of senior week in response to student concerns about the stress of fundraising for this event,” he said in an email to the class of 2015. “We hope that this will mean that the senior class officers will be able to focus their time and energy on creating opportunities for seniors to connect and have fun together throughout the year rather then [sic] having to focus so heavily on fundraising for one week.”

Treasure Tinsley ’15, who volunteered with Tim Vaughan ’15 to host Pub Nite this week (senior officers have yet to be elected), sent an email to Michael Elias, assistant director of student activities, leadership, and greek life, asking how the two would be able to pay for Pub Nite’s kegs in accordance with the policy changes. Beer is a traditional component of Pub Nite.

Yesterday, Elias responded that the college would not help with the purchase of beer, in keeping with school policy prohibiting the college from buying alcohol for students. Elias was firm that students would have to fund the event on their own.

Tinsley asked Elias whether the senior class, moving forward, would be able to ask for voluntary donations at the door or to table at Sharples. Elias said both activities were not allowed. At most, he said, they will be able to ask for the help of their senior class friends. The 2015 listserv cannot be used to those ends either.

Senior Class events cannot be open to the entire campus population, meaning that students may not fund Pub Nite with senior funds. Administrators have not clarified how much money that fund contains.

As the event host, Tinsley expressed frustration that she was not told in advance what these responsibilities would entail. She and Vaughan, who are both running for senior class officers, have been emailing Miller and Elias about organizing senior officer elections since August. Vaughan met with Miller to begin the process in hopes of simplifying Pub Night organization.