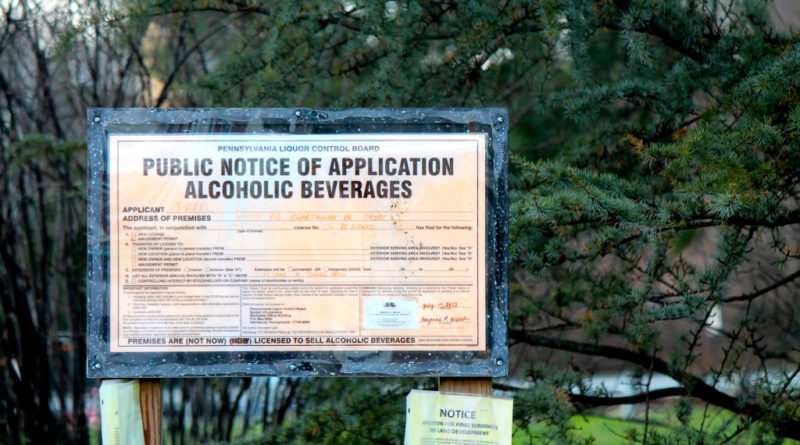 Later this month, the fate of the college’s plans for a restaurant and inn at Town Center West (TCW) will be decided after months of trial at Media’s Delaware County Courthouse. On Tuesday, April 22, Amy Rosenberg, a longtime Swarthmore borough resident, will formally appeal the decision of the Pennsylvania Liquor Control Board (PLCB) to approve the college’s application for a liquor license for TCW. The college plans for TCW to operate as an inn, restaurant, bar and bookstore that will be owned and operated by the college but open to the public. Rosenberg represents a coalition of borough residents who oppose a liquor license in the borough on the grounds that it could have negative impacts on the borough’s safety and moral and economic well-being.

“The TCW project will contribute new tax revenues to the borough, generate jobs, provide new retail and dining options and foster increased foot traffic to the borough’s existing commercial district,” said Maurice Eldridge ‘61, the college’s vice president for college and community relations, who has served on the planning committee for the TCW since its inception in 1999. “In particular, the inn will serve as an intellectual living room in a project we hope will provide a closer, stronger connection between borough residents and the college community.”

Shortly after the college announced the project, however, some borough residents began to question the extent to which they would actually benefit from TCW. Opposition arose initially in 2005 after the college first received zoning permits to begin development on the land at the corner of Chester Road and Fieldhouse Lane. Those wary of TCW’s installment cited the detrimental effects the facility could have by changing the borough’s traffic patterns, removing parking spaces and destroying green areas. Still, the Borough Council, guided by former Mayor Rick Lowe, has remained largely in support of TCW’s construction.

In 2012, however, after the college formally applied for a liquor license to the PLCB,  the concerns of residents opposed to TCW’s construction shifted from the physical imposition of the structure to the potential safety hazards caused by liquor sales.

“They are putting a bar right where there is an incredibly dangerous intersection,” said Will Stanton, a longtime borough resident and member of the coalition against TCW. “I just think that common sense tells you that that is going to make the intersection less safe.”

The location raises additional concern because of its close proximity to the Palmer, Pittinger and Roberts dormitories, also located on Chester Road. Despite the fact that the bar will not be serving underage students, Rosenberg, who lives above the shops on Chester Road, has expressed wariness in their appeal that if the liquor license is approved, they may be subject to increases in “nightly noise” and “rambunctious activity” at the college.

These issues do not only worry borough residents who live close to the college. Stanton, who recently moved out of the borough, echoed similar sentiments.

“Most colleges have large problems with the bars that exist in their nearby towns,” he explained. “West Chester University and Penn State have had huge problems with this. It’s incredible to me that a college would consider putting a bar within 300 feet of a dormitory.”

Aside from the safety concerns raised by TCW’s application for a liquor license, residents also felt that to grant the restaurant at TCW a liquor license in a town where other restaurants are legally forbidden from serving alcohol would unfairly privilege the college’s facility.

“Giving a liquor license to the college and not to other businesses just seemed unfair,” said Stanton. “There have been a lot of restaurants in the borough that have come and gone. They probably would have loved the opportunity for a liquor license, but the college having this special rule where they can have a liquor license on campus and this gives them an advantage.”

According to Eldridge, the college’s quest for a liquor license for TCW was driven by a desire to make the facility more economically viable. Many on the Design Oversight Committee felt that a liquor license would make the inn and restaurant far more appealing to visitors, allowing it to compete with similar establishments outside of the borough.

In 2001, the college began pressing the borough to conduct a referendum vote that would give the college the right to apply for a liquor license. The college could circumvent the “dry” status of the borough that has been in place since 1906 by applying under a Pennsylvania liquor law that allows for liquor licenses to be granted to hotels on the property of accredited colleges and universities. Swayed by the potential economic benefits that a liquor license for the TCW would bring to the town, a majority of voters approved the referendum.

On May 17, 2011, the Swarthmore Borough Council organized a second referendum to provide residents with the opportunity to revise the borough’s earlier decision. The referendum was instigated largely by the protests of students at the college who circulated petitions around the borough for a revote on the 2001 referendum. While the primary concern of these students were the labor practices to be employed at TCW, specifically that the college would not allow employees o join labor unions, many of the residents initially opposed to TCW’s construction used the students labor concerns as a platform for their anxiety about the college’s liquor license.

Nevertheless, according to the May 2011 issue of 121 Park News, a pamphlet distributed monthly throughout the borough, the PLCB had explained that the referendum would not change the college’s ability to apply for a liquor license at TCW. It would only change the status of alcohol sales in the borough.

“If the vote on the 2011 referendum is not in favor of granting liquor licenses in Swarthmore, the status quo will remain,” the pamphlet states. “Swarthmore will remain a dry town, with the single exception of a liquor license permitted at a hotel on the campus of an accredited college or university.”

Under the same belief, in the summer of 2012 the college erected signs around the proposed site of the TCW announcing that Parrish LLC — the college-owned entity responsible for the construction of TCW — had applied to the PLCB for a liquor license for TCW. In February 2013, the application was approved by the PLCB.

Following the decision of the PLCB, a coalition of borough residents began making preparations to appeal the board’s decision, and on May 22, 2013, it brought its case to court, with Rosenberg serving as plaintiff. They were represented by Michael Homans, an attorney at Flaster Greenberg PC, who lived in the borough for 12 years. Given his personal relationship with the issue, Homans agreed to work on the case pro bono.

Now, almost a year after Rosenberg first filed her appeal, the future of the liquor license at TCW remains undetermined. Attorneys representing Parrish LLC have intervened legally on behalf of the PLCB, and the hearing date for the case has been moved back three times on technicalities.

According to Stanton, many residents have been dismayed by the college’s behavior throughout the process.

“They haven’t shown any concern at all for the people,” Stanton said. “It’s kind of sad what the college has become. They just have a lot of political influence and an unlimited amount of money.”

According to the court records provided by the Delaware County Courthouse, Parrish LLC has called on Mayor Lowe and President Rebecca Chopp to voice their support for TCW’s construction and liquor license.

“It has not been easy for the plaintiff,” Stanton said. “At one of the hearings, the college challenged Amy [Rosenberg]’s sincerity and claimed she was only doing this for money. They have characterized us as a small group against any type of progress which is just baloney. We’re doing this because we care about the borough.”

“We are working on behalf of local residents,” he explained. “This all originated out of concern for the well-being of the community.”

Until the formal hearing takes place later this month, however, the future of TCW’s liquor license and its potential social and economic implications remain uncertain.

“Until this court case is resolved, if the residents prevail, the college won’t get its liquor license,” Stanton said. “But I am sure the college is prepared to appeal it all the way to the state supreme court because without the liquor license, they are not going to build the project.”

Eldridge explained that the college has no intention of slowing development on TCW in the near future, describing the coalition’s challenge in court as “a matter that will be resolved soon.”

According to Eldridge, if the license is approved, construction on TCW will begin this summer with an expected completion date of Spring 2016.