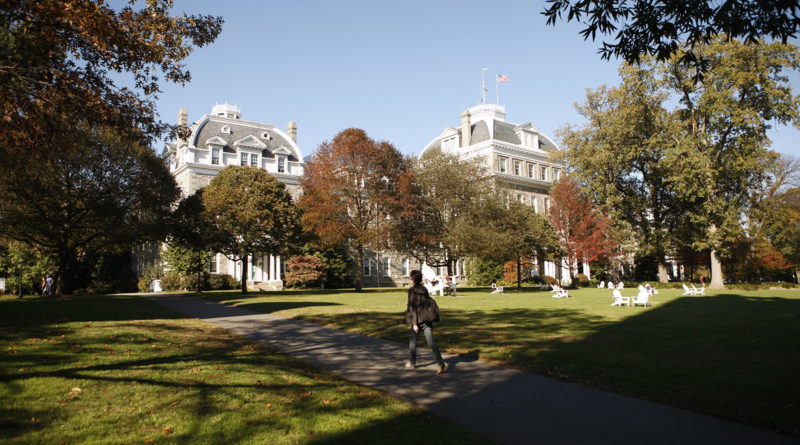 As we look back on the last 150 years of Swarthmore, we might ask: what will Swarthmore look like in 150 years? At its sesquicentennial, Swarthmore can claim a long history of envisioning a better world. Founder Lucretia Mott envisioned a world without slavery. Alice Paul envisioned a world where women could vote. In working with the Student Nonviolent Coordinating Committee, Penny Patch and Judy Richardson envisioned a world free of Jim Crow. In facing uncertain times, we can challenge ourselves to imagine a world not only where vital campus programs are well-funded and education is accessible, but where everyone has access to clean water; where a job and a love for the environment are not mutually exclusive; where nutritious, locally-sourced food is affordable and widely available; where our energy grows out of resilient communities. As a privileged institution, we have a responsibility to be a leader in imagining not only a Swarthmore beyond fossil fuels, but also a just and sustainable world.

We are in dire need of that leadership today. The world is feeling the effects of a changing climate here and now. California is experiencing record droughts, polar vortices have descended on large swaths of the United States and increasingly destructive storms like Hurricane Sandy have struck the coasts in record numbers. Around the world, deadly disasters, including Typhoon Haiyan in the Philippines, flooding in the southeast Asia, and unprecedented droughts in Africa are impacting billions, many of whom live in impoverished areas within the global south. Even in Swarthmore, the college has closed for weather emergencies more times in the last winter than anyone can remember. We need not even need to look as far as the climate, however, to see the full effects of the fossil fuel industry’s actions. Every day, people around the world are having their backyards fracked and their water poisoned. In just the past three months, chemicals used to process coal contaminated the water of 300,000 West Virginians, a train carrying fracked oil from North Dakota derailed over the Schuylkill River in Philadelphia, an underground pipe spewed millions of gallons of coal ash into the Dan River in North Carolina, and a barge spilled over 170,000 gallons of oil into the Houston Ship Channel.

Even in the face of catastrophe, the change we need isn’t happening. Congress is gridlocked. In the wake of the Citizens United ruling, the fossil fuel industry is funneling more and more money into our political system to maintain its subsidies, undermine support for renewables, prevent a carbon tax and scale back environmental regulation. For decades, the environmental movement has been trying to work exclusively within this governmental system. The fossil fuel industry has been winning.

Fossil fuel divestment and reinvestment in renewable energy is changing this narrative. After decades of being on the defensive, the environmental movement — with youth playing a vital role — are now putting the fossil fuel industry on the defensive, attacking their social license and threatening their bottom lines. Support for divestment is mounting from across the political spectrum, ranging from legendary anti-apartheid leader Desmond Tutu and Secretary of the UN Framework Convention on Climate Change, Christiana Figueres ‘77, to the moderate Republican Jon Huntsman, and President of the World Bank, Jim Yong Kim. Meanwhile, Swarthmore continues to profit from the destruction wrought by the fossil fuel industry and refuse to use the privilege of our large endowment to enact political change.

Over the past three years, countless alumni, students and parents have withheld donations from Swarthmore until it divests from fossil fuels. The Fund for a Responsible Swarthmore provides a means for students, faculty, staff and alumni to make a donation that will be invested responsibly (outside of Swarthmore’s endowment) while simultaneously allowing donors to put positive pressure on Swarthmore to invest its entire endowment responsibly. The fund is a collaboration between Swarthmore Mountain Justice and the Responsible Endowments Coalition, and will be held by the Triskles Foundation, independent from Swarthmore’s endowment. The fund will be given to Swarthmore College once the college agrees to divest its endowment from fossil fuels and invest at least 1% of the endowment into Community Development Financial Institutions and renewable solutions to the climate crisis. Once the fund is turned over to the college, 10% of the FRS will be held for immediate-use in community banks or credit unions and used to invest in projects on campus and to support community-based resiliency efforts in the greater Philadelphia area at the discretion of a committee comprised of staff, students, faculty and administrators.

By working collaboratively with over 300 divestment campaigns across the United States and Canada, Swarthmore Mountain Justice and, eventually, Swarthmore College can provide the leadership we need. Students at Pitzer College and Harvard University have already launched funds similar to the FRS, and it is our hope that these will be the first of many. By imagining not only what we don’t support but what we do, Responsible Endowment Funds, like the FRS, provide universities with an incentive to be positive actors for a wide-ranging sustainability.

Of course, funds like the FRS are just one piece of a much larger movement. Students working on divestment and reinvestment across the country are taking their fight against the fossil fuel industry off-campus. This past month, 398 students were arrested outside of the White House, demanding that President Obama reject the Keystone XL pipeline. Using skills learned through their campus campaigns, youth climate organizers are recognizing the dual needs of resiliency and resistance at all levels. As we act in solidarity with those communities most impacted by climate change and extraction, we can leverage the power of our institutions and take action in our own communities to confront the climate crisis and the power of the fossil fuel industry.

In the coming months, Mountain Justice members and allies will be engaging alumni, current students, staff, faculty and administrators to promote the Fund and build positive pressure for the Board of Managers to divest Swarthmore’s endowment from fossil fuels and reinvest in constructive solutions to the climate crisis.

Kate Aronoff  is a senior at the college. Stephen O’Hanlon is a freshman. Both are members of Swarthmore Mountain Justice.

One thought on “Leveraging institutional power”