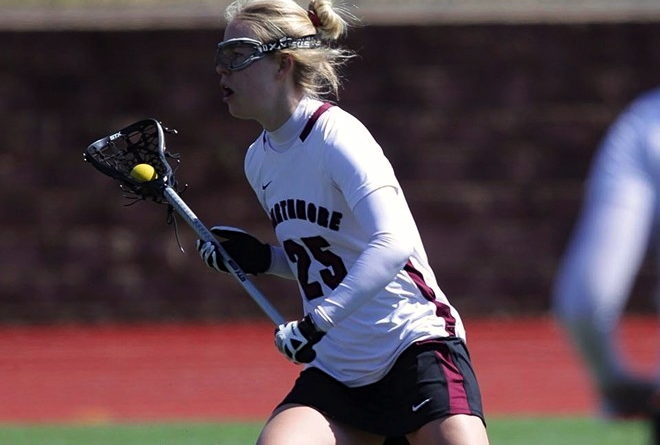 The women’s lacrosse season started at the beginning of this month and the team has gotten off to a torrid start. They currently stand at 5-0, are 1-0 in conference play and have outscored their opponents 78-24.

The team easily handled Eastern and Alvernia in their first two matches, winning by scores of 17-4 and 11-6 respectively. The team then faced tough opposition from Drew and was able to muster up a win in overtime by a score of 12-11.

The Garnet played well in the Drew game, coming out of a three goal deficit with less than seven minutes to play. Corinne Sommi ’14 and Elizabeth Upton ’16 came up big for their team with late goals, but the real story of the day was Lucy Whitacre ’14. Whitacre scored a career-high five goals, with one in overtime to help lead her team to victory.

The victory over Drew was a big victory for the lacrosse team because it tested their resilience coming off of a few games that were not so close. Coach Karen Borbee said, “We knew Drew was going to be very competitive and I was very happy with the team’s focus preparing for the game all week.”

This first three-game set of the season was also beneficial for the team for several reasons. Caroline Murphy ’14 said, “The first couple games were not the most challenging, so it was a good time to get comfortable with the different roles we will play on the field this season.”

Sam Reichard ’15 added, “The start to our season, mainly our game against Drew, has really showed us how good we are and the enormous potential we have for this season.”

After a successful 2013 campaign, the graduation of several key seniors left some question marks in the lineup. With new faces in new positions come inexperience and mistakes. However, Borbee has applauded her team for learning quickly and reaching the level of success they have thus far this season.

These games also helped validate all of the hard work the team put in during the off-season before heading into their spring break trip. The team worked hard before the season started, building endurance and working on shooting and defense.

Lizzie Kolln ’16 said about the off-season, “We had a great lifting and agilities regiment all off-season and preseason with [strength and conditioning coach Ashley Ross], which has definitely increased our strength and speed. This year we are even lifting in season in order to maintain all the work we put in since September.”

With three wins under their belt, the team headed to Hilton Head, S.C. for their spring break trip full of confidence. It was here that they would open up their Centennial Conference play with a match against Bryn Mawr.

The team continued their hot play, scoring 18 unanswered goals before Bryn Mawr was finally able to get on the board. Upton and Nathalie Perry-Freer ’16 each had career-high scoring marks and Sommi contributed five goals of her own. The defense was also solid, only allowing a total of four shots by the opponent.

On the heels of their first conference win, the Garnet played Becker for the second of their two matches in South Carolina. The offense showed no signs of slowing down, scoring a season high 20 goals in a 20-2 rout. Beginning early in the first half, Swarthmore scored 15 unanswered goals to put the game away. Kolln, Upton and Whitacre each contributed four goals apiece in the effort.

While the Garnet are off to a great start, the team knows the season only becomes more challenging from here. Conference play will pick up within a week and there is plenty of competition to go around.

Murphy understands that toughest challenges are yet to come and that the team can’t lose focus. She said, “I think we need to keep up the energy in practices and keep pushing ourselves.  Our competition is going to pick up a lot in the next few weeks so we need build on the first few games and continue to get more confident as a team. Being well conditioned and mentally tough will be important for the more challenging games in the weeks ahead.”

The lacrosse team seems excited and confident in their abilities to tackle the road ahead. While no result is guaranteed, it will be fun to watch the women’s lacrosse team in the coming weeks as they look to continue their blistering offensive pace and lock down defense.