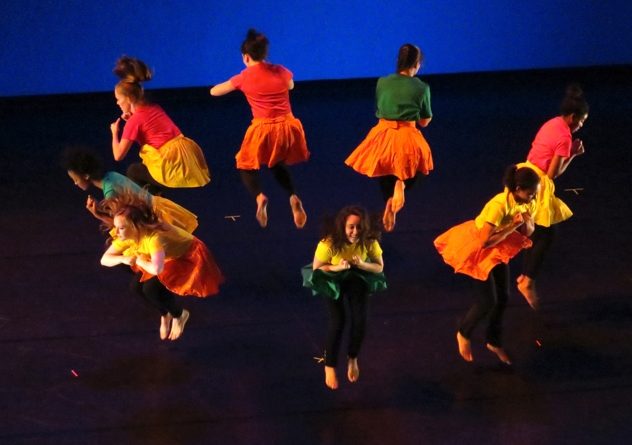 Four new Swarthmore dancers now join the Tri-College dance company Rhythm n Motion, rooted in raising awareness of the dances of the African Diaspora and other underrepresented genres. Jameson Lisak ’15, John Lim ’16, Gillian Geffen ’16, and Isabel Clay ’17 bring a variety of styles and levels of experience, however all will contribute enthusiasm and their love of dance to the group.

On Sunday January 25, current Swarthmore RnM members held an open audition for potential new members. In a three hour period, dancers learned three new choreographies and performed them as a group for evaluation.

Each new member had different motives for auditioning. Clay had been sick during the fall auditions and had been looking forward to the spring ones all year. Both Lim and Lisak said they were prompted by friends who were existing members to try out. All shared a passion for dance and a desire to perform that prompted them to audition.

John Lim has never had any formal training though he did some hip hop routines in high school. He said that “picking up the choreography was definitely a challenge, but it’s all memory, just like studying for class.” Clay, who has had more formal training, said that the audition was “structured like most dance classes. I personally felt so at home. For my friends auditioning who weren’t used to dancing, it seemed a little overwhelming.” Clay has been dancing since she was five, beginning her training with Irish folk dancing and moving into primarily hip hop and jazz.  Lisak agreed that the atmosphere was intimidating and intense but that, overall, it was a lot of fun. Lisak trained in middle school for tap, modern and ballet, though picked up hip hop and b-boying on his own. Geffen was able to pick up the choreography, having been trained in a variety of styles since she was four.

While each dancer has their own preferred style of dance, they all said they look forward to learning more and becoming adaptable to RnM’s various styles. Lim said, “I think that I’m adaptable to different styles because I haven’t had any particular training and I’m open to learning.”

Each dancer said they will struggle to balance the large time commitment of RnM rehearsals with academic work and extra-circulars. Clay said that “trying to balance my oldest love of dance with my newest one of rugby will certainly prove difficult on top of how challenging Swarthmore is in and of itself.  At the end of the day, I can’t see myself spending the rest of my time here without both groups in my life.”

While these new dancers are aware of the challenge, they all carry with them an enthusiasm for their future with the group. “I think what I’m looking forward to the most is getting to know the other dancers and being part of the RnM community,” Geffen said. “ I like it when I can be in a group of people who share a common passion.  I like it even more when that passion is dance.”

Currently, the new members are working with senior members to sign up for student led choreographies for the upcoming spring show. They are ready for a long semester of rehearsals leading up to the final performance where they will be able to showcase their talent and passion on stage.

Despite Swarthmore’s widely-held reputation as a college committed to democratic engagement, more than half of Swarthmore students did not exercise

October 24, 2020 Kirit Minhas 0
Do NOT follow this link or you will be banned from the site!