Arts » Orchestra 2001 pays tribute to MLK through art and music 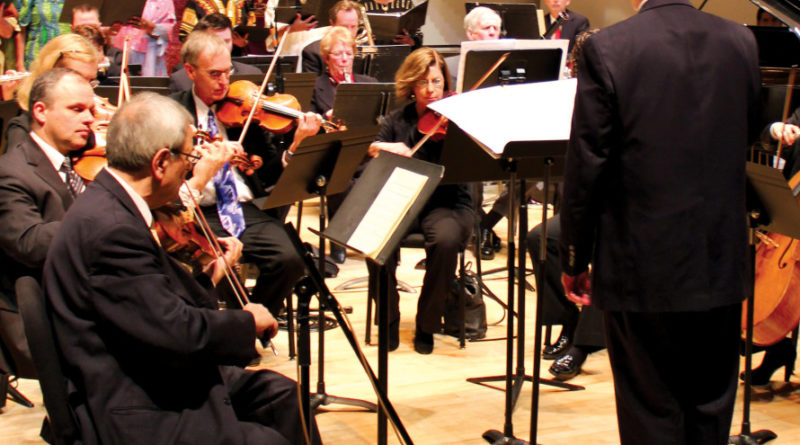 Founded in 1988 in Philadelphia by Professor James Freeman, Orchestra 2001 has performed in Philadelphia as well as at Swarthmore almost every year. The group focuses on new classical music and has debuted over 90 pieces. But even with this prestigious record,  the group remains intimately tied to the college. Several students and members of the faculty have collaborated with them on concerts such as the Gamelan Semara Santi last year. As one of only three contemporary music ensembles in the United States that can scale up to a full chamber orchestra, O2001 brings to our campus an echo of Philadelphia’s rich cultural scene.

The concert began with a Richard Danielpour clarinet concerto called “From the Mountaintop,” performed by Anthony Gill. As Principal Clarinet of the Metropolitan Opera Orchestra, Gill has performed with artists like Yo-Yo Ma and Midori. He also serves on the faculty of the Julliard School. The origins of the piece are found in Dr.King’s movement, and were inspired by emotions such as forgiveness and resilience in the face of struggle. Danielpour, who currently teaches at the Manhattan School of Music and the Curtis Institute of Music, describes his intention to compose around the idea of the clarinetist as a pastor, with the orchestra representing a congregation.

Another piece, called “A Voice Cries Out: ‘Dare to Love’” was arranged by Jay Fluellen, present choir master of the African Episocopal Church of St. Anthony. Like the clarinet concerto, this piece asked some essential questions about Dr. King’s life in an unconventional format. Directed by Fluellen, music by an orchestra, a jazz trio and a gospel choir was interspersed with poetry and narration inspired by Dr. King’s messages. Fluellen describes the central message of the piece as one of hope in the face of incredible obstacles. The title references the prophet Isaiah and alludes to the answer that Dr. Fluellen sees as the key to our quest towards peace and love: faith. The movement ended on a confident, promising note with narration by Fluellen that told the audience, “someday, we will reach that city of freedom.”

But this Monday, Orchestra 2001 did not perform alone. O2001 also brought in students from the “Play On, Philly!” program, an initiative that provides tuition-free musical instruction in communities that do not have access to music education. Children between the ages of 11 and 15 performed the premiere of their new composition, “Symphony in the Key of Unity,” which was shortly followed by a spiritual medley. Together, these groups paid tribute to Dr. King through art and music, showing their respect for one of the most influential men in our history and reflecting on the resonance of his messages in our community today.