Campus Journal » Around Campus » In Search of Fitness: Finding Fulfillment Beyond the Field 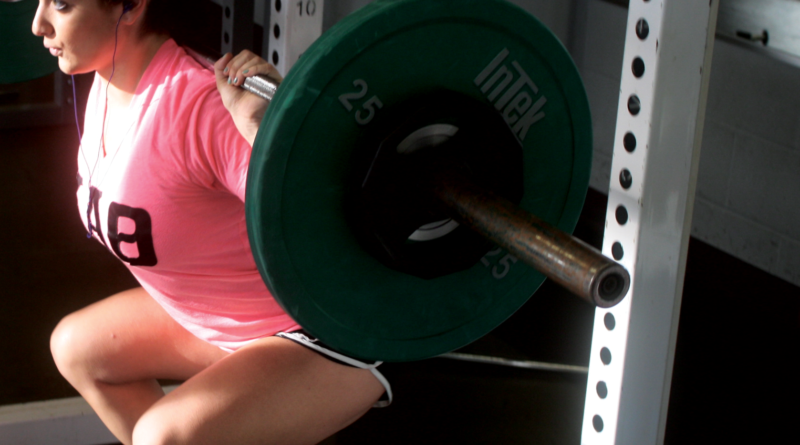 Varsity athletes are not the only Swarthmore students actively involved in exercise on campus. Many students are finding that physical fitness can be achieved outside of an organized sport. Trending workout routines are often short sessions of high-intensity workouts, a popular combination for students looking for an exercise routine which will fit into their hectic schedules and allow them to stay in shape.

Sophomore Jessica Seigel is a swimmer at Swarthmore who intensified her workout routine by beginning CrossFit training over the summer. Seigel’s swim coach from home recommended the program to her and thought she would enjoy it as a way of staying in shape. Seigel lived and worked at Swarthmore over the summer and was able to commute ten minutes to nearby Broomall to participate in the workout.

CrossFit is based off of a variety high-intensity functional movements and combines a series of natural movements. It’s an hour long program.

“You’re dead on the floor by the end of it and you love every minute of it,” Seigel said.

Aside from the physical aspect, Seigel is also impressed with the goals of the program and its support of a positive body image. The program focuses on becoming fit, not necessarily thin, and, in Siegel’s opinion, it is an especially constructive program for girls.

“It’s good to see girls and guys doing the same amount of work,” she said. “Everyone is always cheering every person on to finish and it’s a really motivational atmosphere.”

Along with the exercises, Siegel has also adopted the CrossFit diet, which urges its adherents to eat things that are most natural for the human body. She has cut out grains, soy, and dairy and mostly eats a lot of meats, fruits, and vegetables. This is a difficult task, Siegel admits, within the confines of Sharples.

Seigel has seen a significant personal difference in body fat percentage as a result of her CrossFit training and changes to her diet.

“I’ve been eating differently and I’ve noticed a change in my performance and the way I look,” she said. “There’s a lot of, ‘Oh, I didn’t know I had that muscle there,’ and that sort of stuff.”

While she no longer has a car and is unable to continue attending CrossFit classes, Seigel has been able to fit in about three sessions each week based on the online workouts into her busy routine.

Laina Chin ’16 began going to SoulCycle last August with her sister while at home in Los Angeles. SoulCycle and other spinning classes focus on creating a motivational, indoor, full-body workout. The classes are often less than an hour and are fast-paced workouts which involve spinning and other forms of fitness that aim to exercise a person’s whole body through aerobic spin exercises accompanied by resistance training and weightlifting.

What appeals to Chin and other SoulCyclers lies in more than the workout itself. “It’s very therapeutic, which sounds really cheesy,” Chin said. “If you find the right instructor they say things that … [are] very inspirational.” Chin also enjoys the general atmosphere of the classes, which are accompanied by candles and dim lighting.

SoulCycle was Chin’s first experience with spinning classes, though she has done martial arts, dance, and yoga in the past. While she cannot continue with SoulCycle here on campus, Chin is taking tap classes this semester.

Junior Rossana Estrada, on the other hand, is doing Insanity, a different type of trending fitness. Insanity is a two month program divided into two parts, with an accompanying nutrition guide. Videos provide a schedule to get people into shape, requiring six days of training per week. The first month “breaks you in” and the each month after that reaches another level of intensity.

“I gained the freshman fifteen and I hadn’t really done anything about it,” Estrada said. “I had bought the [Insanity] videos and I had never committed to the program so I decided to try it out.”

The videos live up to their name and provide an intense workout that lasts from about 40 minutes to an hour. The program has a regimented routine which provides specific workouts for each day. “It’s really enjoyable in a weird way,” Estrada said. “You feel like you’re dying but when you’re done, you feel really accomplished.”

The videos are successful at motivating participants. Estrada acknowledges that you get out what you put in if you do it right.

“By the end of the workout, your t-shirt should be soaked, and if you ring it out, sweat should drip on to the ground,” she said.

Estrada and her friends sometimes do the workout together. Because schedules often don’t match up, though, they go through the insane workout as a group only when they can.

“I definitely feel the results,” she said. “I’m no longer tired and out of breath when I go up the stairs.”