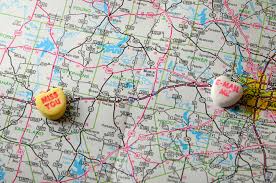 Will Black ’16 began thinking about “the talk” in his junior year of high school.

He and his girlfriend, Mauri, had been together for two and a half years, but like many high school couples, they had a history long before the first date. Brought together by siblings’ sports practices, they tossed footballs together as seventh graders, and shared a first kiss in eighth. Black described them as “a really really really good match.”

“I was already thinking about next steps,” Black said in a Skype interview. “We were about to enter senior year, and I was already nervous about how we were going to handle it.”

Together now for four years, Black and Mauri seem to fly in the face of warnings commonly offered to high school couples determined to give their love the old college try. While Black acknowledged that it “definitely hasn’t been easy,” he considers his relationship well worth the Skype conversations, phone calls and weekend visits.

The couple’s success, however, isn’t the norm. Black knows of only one other couple from his high school whose relationship survived the first year of college.

“We knew a few couples who maybe lasted the semester, came back to Philadelphia for the holidays, and decided it was best to part ways after seeing what it would take to maintain that type of relationship,” Black said.

Jason Hua ’15 and his high school girlfriend didn’t even make it to fall break before realizing that their college experiences wouldn’t include each other. Together since junior prom and runner-up for “cutest couple” at their boarding school, the pair initially believed the six hours between Swarthmore and Dartmouth would be manageable. With an “incredible” summer under their belts and previous experience negotiating long-distance over school holidays, they seemed poised to make it work.

“I had a really great time in high school,” Hua said. “And I had a really close group of friends, and [my girlfriend] was part of that group. And I guess part of me saw my relationship with her as a way to hold on to that.”

Hua first worried something was amiss when his girlfriend changed the privacy setting on her relationship status at the end of the second week of classes. When he called later that day to ask about the Facebook alteration, his girlfriend claimed that the relationship was “limiting” her college experience. They broke up that evening.

In Hua’s opinion, high school couples – no matter how committed to their relationship – can’t accurately anticipate the challenges they will face in college. While articles on sites like the Huffington Post and Teen Vogue advise conversations about commitment and trust, extrapolating from the sun-kissed halcyon summer to the moment when distance becomes a reality is error-ridden at best.

For couples with less history than Hua and his girlfriend, personalities can be affected by the strains of the adjustment as well. As his senior year drew closer, Joshua McLucas ’15 noticed his college-bound girlfriend becoming more and more upset – a reaction he retrospectively considers a warning sign for the months to come.

Unlike Hua’s girlfriend, McLucas’s didn’t feel limited by her relationship when she arrived on campus, but by her inability to assimilate to college life. Making few friends, she became increasingly emotional in her demands that McLucas visit once a month – a two-hour trip from the boarding school they attended. Meanwhile, McLucas began resenting the time he spent away from school.

“As time went on, the lasts and finality of high school became more apparent and I started wanting to stay on campus,” McLucas said.

McLucas’s female friends also became a bone of contention. Although McLucas wouldn’t have described his girlfriend as jealous prior to their parting, he soon found himself lying about spending time with members of the opposite sex to avoid the angry phone conversations that were sure to follow.

The most obvious manifestation of his girlfriend’s insecurity – and the plummeting pulse of the relationship – were nightly phone calls that lasted for hours … while neither McLucas nor his girlfriend spoke. Because his girlfriend became upset whenever the calls ended, McLucas would put off the inevitable and go about his homework while precipitously sandwiching his phone between ear and shoulder.

“It all comes down to insecurity – a little on my part and definitely on her part,” McLucas said. “You have to remember that if you don’t see and talk to [your partner], they’re still going to be there the next day, and – this is a huge huge most likely – they won’t have cheated and you won’t have broken up or anything bad.”

McLucas’s girlfriend ended up taking a leave of absence from her college at the end of the academic year, near the time when McLucas ended the relationship.

Despite the dangers of using a hometown honey as a crutch in the first formidable weeks in a new setting, many do find balance between nurturing high school relationships and exploring their new home. As an incoming freshmen, Awjin Ahn ’15 remained in a relationship with his girlfriend of six months – then a high school senior. Making time for phone calls and Skype dates didn’t stop him from forming a close group of friends on his hall and around campus.

“I felt like the relationship was something stable that I could hold onto as my environment changed drastically,” Ahn wrote in an email. “Everything at Swat was new to me—the people, the academics, Philly, just college life in general—and it was nice to have a girlfriend as a support system and connection to home.”

Although Hua reflected that his efforts to make new friends in the first weeks of school weren’t as concentrated as his girlfriend’s, he didn’t feel isolated after the breakup. With fast friends in his dorm, he spent his free time working out in the Mullan Center and becoming involved in a club sport. The exercise provided a better distraction than college night life for the freshman, who remained unimpressed with avenues for pursuing romantic interests at the college.

Students in relationships anxious to experience their first Paces party, however, needn’t worry about breaking romantic convention. While careful not to put himself in a compromising situation, Ahn enjoyed the best that Swarthmore night life had to offer while still involved with his girlfriend.

“I still partied every weekend,” he said. “I was just careful to not hook up with anyone else or make any moves that might be mistaken for advances, and it was a non-issue.”

Black also claims that neither he nor Mauri limited their party-going for the sake of their relationship.

“I don’t know if I can recall a time when I had to explicitly tell someone that I had a girlfriend,” he said. “It wasn’t a case where we stayed back in the dorms because we missed each other. We both had the attitude like let’s go meet new people, this is college, let’s create our own new little worlds.”

While all four couples talked about experimenting with an open relationship, none decided to pursue it. Frequent Skyping, texting, and the occasional phone call was the conversational cocktail used to take the edge off the distance. Ahn, Black and McLucas also arranged visits every month, on average. Unlike McLucas and his girlfriend, Ahn and Black split the responsibility of traveling between campuses – in both cases, a six-hour drive – between both partners.

Although only Black would advise first-years to hold onto their high school sweethearts – and only in cases where neither partner has any serious doubts about continuing the relationship – Ahn, Hua and McLucas all recently pursued long-distance relationships. After becoming involved this past spring, Ahn spent the summer away from his new Swat sweetheart; however, he sees this separation as a different breed from his previous relationship.

“This time, we had a foreseeable future where we would be together again. So that made it easier,” Ahn said.

Hua pursued a second long-distance relationship – this time, with a college freshman at Yale he met over the summer – in the fall of his sophomore year. The relationship ultimately ended in November, and Hua says the combined experiences seriously limit the circumstances under which he’d consider going long-distance again.

“I can see a place for long distance if it’s really serious and it’s only very temporary,” Hua said. “But in college, for four years, the light at the end of the tunnel is dim.”

McLucas spent most of this summer away from current girlfriend Anita Castillo-Halvorrsen ’15. The couple, together for over a year and a half, is now navigating a semester apart due to study abroad for a combined total of seven months apart.

And Black and Mauri?

He advises couples to push back the deciding conversation for as long as possible – advice he received from a friend attempting long-distance before his junior year of high school.

“He told me to put off that conversation as long as you can, because even though you think it’s productive to speak, once you plant the idea of potentially not being together, you might ruin your entire summer or bring about a difficult time before you need to,” Black said.

He and Mauri cemented plans to pursue long-distance only a week before Mauri left for Tufts University.

With students at most colleges now entering their second week of classes, the advice may come late for freshmen. For junior-year couples, however, upcoming semesters abroad present the perfect time to procrastinate.

The second part of this article, featuring Swarthmore couples negotiating long-distance relationships during semesters abroad, will appear in next week’s issue of The Phoenix.