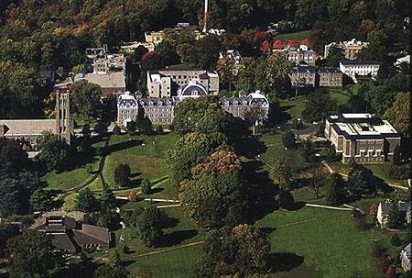 At last weekend’s open meeting of Swarthmore College’s Board of Managers, Board Investment Committee Chair Chris Niemczewski ‘74 was beginning to give a presentation entitled “The Cost of Divestment,” which he had prepared with Vice President for Finance and Treasurer Suzanne Welsh, when around 100 students entered the room and halted the presentation.

The Daily Gazette obtained the following set of charts, which were to be a part of Niemczewski’ presentation, and the accompanying FAQ sheet, from Welsh. These documents do not reflect original reporting or writing by students affiliated with The Daily Gazette.

The documents lay out the College’s estimate that divestment from fossil fuels would cost a total of at least $200 million (cumulative) over the next ten years. The value of the College’s endowment was approximately $1.5 billion as of June 30, 2012.

To summarize what can be read below, the estimate proceeds from Niemczewski and Welsh’s claim that in order to divest, the Investment Committee and the Board as a whole would have to remove all funds from “commingled funds” and likely from “separate portfolios” as well, types of investments that together account for the vast majority of the endowment. The estimate has little to do with the returns of fossil fuel industry stocks and hinges on the argument that fund managers will refuse to select investments based on a particular client’s company-by-company preferences. Dropping these fund managers, the College’s endowment would have to be invested in special fossil fuel-free index funds, which are predicted to perform $200 million worse over the next ten years than the College’s current investments.

For comparison, The Daily Gazette’s back-of-a-napkin arithmetic estimates that $200 million, if borne by 1500 students annually for 10 years, would cost students an additional $13,333 per student per year. This arithmetic does not try to take into account any form of inflation or cost, enrollment, or investment changes. It is simply intended as a rough means of understanding the scale of the College’s $200 million estimate.

FAQ from Niemczewski and Welsh:

Who is responsible for the endowment?

What is the investment strategy of the endowment?

Why is diversification important?

Swarthmore’s endowment is invested in many asset classes, as shown in Chart 1. An asset class is a type of investment, such as stocks of domestic companies. Diversification is important because some assets do well when others are performing poorly. Also, various assets have different risk characteristics. Diversification helps the College to achieve good returns with lower risk. Furthermore, within an asset class, the Investment Committee selects professional investment managers who employ different investment strategies, which also provides important diversification.

How do investment managers invest our funds?

There are basically three ways an investment firm can invest–through an index fund, a separately managed portfolio, or a commingled fund. The simplest way is through an index fund. These funds essentially hold all the stocks in a specific universe. For example, a domestic stock index fund might hold all the stocks in the Standard & Poor’s 500 Index. The performance of an index fund will replicate the universe and will do so for very low fees. Using index funds is called “passive” management and is a good low-cost strategy.

Institutions like Swarthmore, however, hope that they can identify and hire investment managers to put together customized portfolios that will outperform the basic index approach. This costs more so the performance must justify the higher fees. Under this “active” management, there are two approaches.

The first is for a firm to create a portfolio just for Swarthmore and to buy stocks just for Swarthmore; this is called a separately managed portfolio. The second way is for a firm to pool together all its clients’ money into one large portfolio with each institution owning a pro rata share. This is called a commingled fund. An institution can have greater control over a separately managed portfolio, but fees tend to be higher. Commingled funds, because of their economies of scale, offer lower fees. Ultimately, an endowment seeks to invest where it gets the best return net of fees. Swarthmore has a relatively high performing endowment and does not use index funds. The endowment’s assets are in a mix of separate accounts and commingled funds. Swarthmore has been able to consistently achieve returns higher than what index funds would have earned.

How much of Swarthmore’s endowment structure could potentially be affected by divestment?

As Chart 1 shows, over 60% of Swarthmore’s endowment could potentially be affected by divestment. This includes 5 domestic equity managers, 8 international equity managers, and 30 managers of alternative assets (e.g., hedge funds and other private investments). These firms currently have no divestment constraints and could possibly invest in fossil fuel companies.

What would happen if Swarthmore decided to divest?

If Swarthmore decided to divest, we would have to find replacements for all the commingled funds because an institution has no power to impose a constraint on a commingled fund. Swarthmore’s commingled funds totaled $660 million at the end of the last fiscal year. Divestment would incur a very large cost.

Chart 2 shows that Swarthmore’s domestic and international stocks have added 1.7% and 1.8% PER YEAR during the past ten years over and above index fund returns.

With divestment, an option would be to hire a firm (such as Aperio Group) to design customized index funds for the endowment. This group could put together portfolios of stocks designed to match desired indexes but without using the divested companies. The firm customizes this approach for an endowment’s specific constraints.

If Swarthmore were to follow this approach, it would forego the 1.7% to 1.8% added return per year. This would amount to lost earnings each and every year. As Chart 2 shows, the loss the first year would be $11.2 million, but by five years it would be a cumulative $73.1 million, and by ten years it would be $203.8 million. It would be even greater if all the affected portfolios of the endowment were invested in this way.

What about the cost of divesting the endowment’s separately managed funds?

It is likely that not all the endowment’s separate account managers would agree to invest with constraints. Even if they did, a recent study* indicated we might expect a .4% annual cost. This would amount to over $5 million in the first 5 years and $14 million after ten years. When Swarthmore divested from stocks of companies doing business in South Africa over 20 years ago when the endowment was much smaller, it cost the College $2.2 million.

Could the College use all separately managed social investment funds?

We know that the index approach described above is possible. We do not know of any firms that have managed portfolios with a “sordid sixteen” constraint.

Are there other considerations with divestment?

Important considerations are whether divestment would have an impact and whether it might instead have unintended consequences. If Swarthmore were to divest, it could not participate in shareholder activism efforts, many of which have resulted in tangible progress. If engaged shareholders were replaced by shareholders without conscience on these issues, it would not deprive companies of capital, but would rather make it easier for them to maintain the status quo. Foreign ownership of domestic fossil fuel companies could also raise strategic geopolitical issues.

This is all very complex. What is the general conclusion?

Managing an endowment is very complex. Because the investment firms that manage funds for Swarthmore are among the best, our endowment has generated good returns over time. While determining a specific cost is not possible, a strong argument exists that a divested Swarthmore endowment would not continue to generate our historical level of outperformance and that divestment would entail a high cost for Swarthmore College accompanied by limited impact on the targeted companies or other unintended consequences.

*Addition: after publication of this article, Welsh provided a citation for this study: Timothy Adler and Mark Kritzman, “The Cost of Socially Responsible Investing,” Journal of Portfolio Management, Fall 2008: 52-56