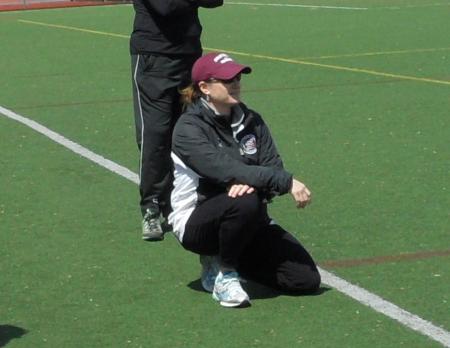 I want to focus first on the milestone you just reached, with your 200th win. How does that feel, because you’re the second person in Swarthmore history to reach that milestone? How does it feel to get that 200th victory?

You know, it’s not something I think about, in terms of keeping track of things like that. I think what comes to my mind is having been here and coaching lacrosse here for 20 years, and having been here for 22 years total. I guess I feel honored to have been here for that long to have had that opportunity to get to that milestone. You’ve got so many things that make up a win—you’ve got the team, the players, the coaches, all of those people who have been involved since my first win to my 200th win, and there’s been so many different alumni, players, coaches, like I said. So I just see it as an honor to have been here long enough to reach that milestone.

You’ve seen the lacrosse program throughout the years, since you’ve certainly been here a while. What was it like when you first came in, and, looking at it now, has it changed a lot or has it remained steady?

Sports in general at the college level has changed quite a bit. I mean, when I first started here, I coached soccer and basketball my first two years, and then basketball and lacrosse, and then field hockey and lacrosse, and now just lacrosse, so quite a number of sports over the years. And what’s changed is that we’ve gotten to a point where the sports are so much more specific now, in what you’re trying to accomplish—obviously, winning and losing is the ultimate, and the scoreboard tells the tale—but in reality, what you’re trying to do each season with each team is help them reach the full potential that’s possible. Things have changed over the years as far as the type of work that we do to get the team prepared during practices, for games. That has all changed. Recruiting has all changed, the non-traditional season has added to the change. But when it really comes down to it, the teaching of a group of individuals a sport, and helping them to reach their full potential as individuals and as a group, hasn’t changed. So it’s a two-way answer: a lot has changed, but I’m still doing some of the same things that I was doing 20 years ago with the lacrosse program.

I guess, in a way, that’s comforting—it’s nice to have that one constant part.

So looking at this season, you guys have had a really strong season so far. How have you felt your team’s been performing this season?

Obviously, it’s been a great season. We have played some really great lacrosse. To me, three out of our four losses has been what I would call good losses—they were ranked in the top ten, we lost one by three, the other two by five. We’re in those games, where, in the past, those are the types of teams who we weren’t competitive with. We have one loss we’d love to have back, and that was the McDaniel loss. That was a tough loss that’s put us in a tough position because now we have some pressure on us to win the last two games in order to qualify for the playoffs. I feel like if you just take away that one game, there aren’t that many games that I feel like we haven’t reached our potential. Se if we can keep doing that—playing to our potential these last two games—we have the ability to win. So we’ll see what happens.

So it sounds like, besides that one game, no regrets so far?

No, not at all. Sometimes you have to learn from your losses, and that one might come back to be a tough lesson. But at the same time, I really do think it helped us gain some perspective and work a little bit harder going into the tougher part of our season. We went to Gettysburg, we went to F & M, and we were able to come out of there with a lot of confidence going into this last part of our season. Everything teaches you something for the next step. We’d love to have it back, just because it’s put us in a tough situation, but it really did, I think, help us learn to work a bit harder.

Could you talk a bit about Annalise [Penikis ’13]? She’s been having  a really strong season so far.

Annalise has been doing really well. She had a strong junior year, so going into her senior year, she was no secret. Some of our non-conference opponents might not have known as much, but our conference teams all knew about Annalise from last year and even the year before. So it’s been challenging for her, because she’s had to do some things now that really grow her game even more, which has made her an even stronger player, because the defenses are concentrating on her. One, the team has really stepped up as well, but Annalise has really worked hard to work more options into her game so she can continue to be strong. So, for example, she has more assists this year because the entire game she’s being targeted as our scorer when she attracts all the defenders, so she’s able to find her teammates and make them better. That’s helped her game to grow even stronger.

You’re not a very senior-heavy team, you only have four seniors. How’s it been with these four seniors—you’re obviously going to miss them next year.

Definitely. But what I would really love people to know about these four seniors is that when they came in as freshmen—and Annalise came in as a sophomore—our team was O.K. We were kind of in the middle of the pack. I think we were ranked somewhere in 80, 85, 86. We’re now 30. Over the years, this group has really been selfless. Beth Martin, Nicole Vanchieri, Catie Meador, they don’t get a lot of publicity or credit. Beth and Catie are both defenders, and there aren’t a lot of stats there. Nicole is a midfielder playing both ways, all the time, running the full field. The three of them deserve a lot of credit, and when you add Annalise into the mix the following year, when she came in, they’ve really taken this group to a different level than we were before they got here. I mean, that’s apparent by the rankings, but it’s also apparent by their work ethic and their dedication to the team, and they enjoy playing. And that’s contagious. So I think it’s really helped each class coming in behind them to really fall into a good pattern as far as staying prepared for the season and during the season and pushing themselves to do their best. They’re great leaders, they really are.

Sounds like they’ll be missed a lot next season.

They will be missed a lot. They will be missed a great deal. Beth and Nicole have been four-year starters in the midfield, like I said, and there’s a lot that no one notices, that no one keeps track of. They’re always ready to go at practice, always working hard. Catie’s come on as a defender, she’s doing a great job. And all four of them together have been a good senior leader unit. They work well together.

You mentioned earlier that there’s a lot of pressure with these next two games coming up. I’ve been talking to a lot of coaches, and the thing they’re always talking about is, with Honors exams coming up and finals coming up, this is always the toughest part because players are emotionally and mentally starting to feel drained. How do you see balancing Swarthmore academics and athletics playing into these next two really crucial games?

Well, that’s just the nature of being here … in the athletics, obviously, you try not to let that get to you, but there’s a million other things going on. We’re away at Washington on Wednesday night, and that’s tough because it’s a long bus ride and we’ll get back late, so we try not to concentrate on the things we can’t control, and try to concentrate on the things we can. We can’t control the time the year is, we can’t control the fact that it’s away, so we really work hard to find a way to focus on the present when we’re there, forget about everything else, and give it everything you’ve got. And when it’s done, go back to what you were doing before … it plays a role, there’s no doubt, but we work hard to try to stay focused for the short time that we need to be focused on the athletics. It’s a challenge, but it’s one that every student-athlete faces here at Swarthmore. We kind of pride ourselves in it—that’s what makes us the underdogs sometimes. We’re playing teams that don’t necessarily have those same pressures, yet we’re still able to accomplish quite a lot, even under those circumstances. I’m really proud of how they handle themselves and how they’re able to reach down and find that extra energy and that extra focus. And this week is going to be a real test.

With the game against Washington, what are you going to be focusing on in terms of the type of opponent Washington is?

We’ll have a good game plan ready, and hopefully the idea is to follow the game plan. I think the key for us against Washington is controlling the tempo of the game. Washington likes to run, they like to fast break, their transition through the midfield is very quick, so what we need to do is find our tempo, not theirs. That takes a lot of discipline, controlling the possessions and making each possession count. If we’re able to control the tempo and concentrate on making good decisions that will allow us to keep possession of the ball, I think we’ll be successful. We’ll see what happens. We’re a good team, they’re a good team. I think it’s going to come down to who shows up more ready to control the game.