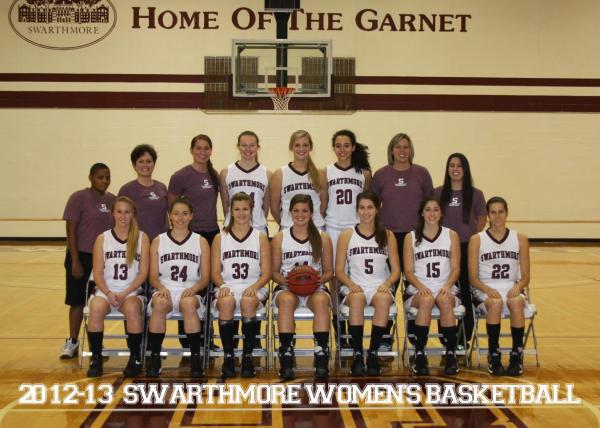 The best single-season shooting performance in the history of the Swarthmore women’s basketball program began with a 6-12 from three in the season opener against Chatham.  What a harbinger it was.  Eliza Polli ’13 led the Centennial Conference in 2012-2013 hitting nearly 2.5 threes per game, shot 50 percent or better from deep in five of the team’s last nine games, and hit 5-9 treys in Swarthmore’s ECAC-opening six point victory over Marywood.

“I learned my role as a three-point shooter right away and then became more confident in my abilities as I got older, Polli said.  It showed.

As a senior, Madge Ross ’13 was the best slasher in the Centennial Conference using a vicious cross-over dribble to knife to the rim at will.  Save an unconscious shooting performance against Dickinson when Ross went 7-12 from three leading Red Devil head coach to repeatedly turn to her assistant yelling “the game-plan’s not working,” no cushion was large enough to keep Ross in front.  In her final game in Garnet, Ross dropped 22, 14 coming inside the arc, as the Garnet brought the ECAC Championship to Tarble Pavilion with a five-point upset of top-seed Moravian.

“Through my four years of playing, I got so much better as a player skill-wise, court-wise, and leadership wise; I became a better shooter, a better passer, a better driver,” Ross said.  I love to create on the floor, and after experiencing the collegiate game more, I learned to make better passes, better decisions.”

I really feel that I was able to play my best season my senior year, which is an awesome thing. One thing I noticed my senior year was the utter confidence I felt on the floor.”  It showed.

The stylistic, personnel, and result transformations under these two seniors have been nothing short of remarkable as with a largely similar core to 2011-12’s 9-15 squad, the 2012-13 Garnet won 15 Conference games en route to a 23-7 finish.  And what a fun team the 2012-13 Garnet was to watch, very much embodying the personalities and styles of the seniors.  It’s a special team that can win games shooting 7-37 (at Gettysburg) or 8-17 (vs. Haverford) from three, committing 24 (vs. Marywood) or nine (vs. Washington & Jefferson turnovers).  With a 40-minute press and live-by-the three mentality, the Garnet was a matchup nightmare built as much on the skills of the perimeter seniors as the talents of Katie Lytle ’14 and Elle Larsen ’15, the two best interior players in the Conference Alex Vasilla and Caroline Murphy considered.

But for all the importance of style, 2012-13 was as much, more even, about attitude and camaraderie.  “I wanted us to always stay positive,” Polli said.  “Madge, Katie and I didn’t want the girls to ever get down on each other, so keeping our team chemistry positive was a main goal this year.”

Added Ross, “We were such a cohesive group of women on and off the court this year, and I think a lot of that had to do with the fact that we had no sense of class or ranking system.  Everyone was in the same boat, and everyone contributed just as much to the team.”

When confidence is backed by humility, the result is a 23-7 ECAC Championship season.  “I think my point of emphasis this year was really for every single person on this team to wear our school letters with pride.  I wanted each person to feel entitled to represent ‘Swarthmore’.”  That attitude is contagious, an us-against-the-world attitude built on a ninth-place pick in the preseason coaches’ poll and one that endures beyond two seniors.

“We all played for each other and we were able to do that because of our love and respect for each other on and off the court,” Polli said.  The result will hang as an ECAC Championship banner that will flutter and shine for decades as memory.  “We will always be remembered in that gym and in Swarthmore’s history books and that’s so exciting to know,” Polli said.

The banner will be a reminder of the coalescence of passion and humility, skill and camaraderie, raw talent and heart.  For Ross, “I hope the team continues to believe in themselves and all that they are capable of doing, both on and off the court. I hope they wear that ‘S’ with swag, just like we did this year, because they are capable of accomplishing amazing things.”

Indeed, the banner will even represent the very ethos of Division III intercollegiate athletics.  “[My teammates] made me a better leader, a better player, and a better person,” Ross said.   It’s hard to ask for much else out of a collegiate career.  The game-winners, Centennial run, ECAC Championship, and legacy for a program that, by returning personnel, should be picked to finish second in the Centennial next season was all gravy.

One thought on “Senior Spotlights: Polli and Ross Lead a Magical Run”