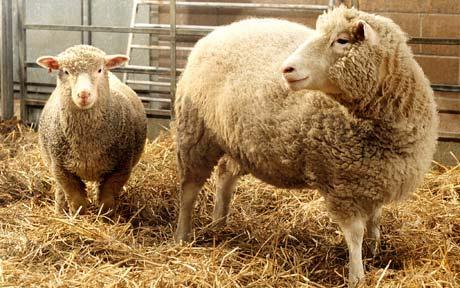 Let’s imagine for a moment we had the technology to recreate a species once considered extinct. Imagine that we could use the genetic information from those organisms’ DNA to create new individuals that have not roamed the earths for generations. Consider what it would mean if extinction weren’t permanent, and humankind could revive any species it wished at their own digression.

These prospects were once science fiction — the subject of Michael Crichton’s novel Jurassic Park and the movies of the same name — but that will all soon change. After all, it was seventeen years ago that scientists first successfully cloned a mammal — Dolly the sheep. In that short time, cloning technologies have grown by leaps and bounds. While Dolly was created after many failed attempts and was plagued by health problems her entire life, scientists today can create clones of organisms more easily and more quickly.

Bringing back dinosaurs today is still out of the question — fossils do not contain the all-important DNA for cloning and dinosaur DNA. But many species that have gone extinct more recently could be feasibly recreated, and perhaps even reintroduced into the habitats that were once theirs. The passenger pigeon, the great auk, and even the wooly mammoths of Siberia are among the species that have been suggested for early consideration to be brought back, once the technology is ready.

This idea of recreating species that have completely died off has been termed “de-extinction.” De-extinction does not just mean the recreation of a species for our own amusement, as in Jurassic Park. Rather, these species could invigorate ecosystems that have begun to deteriorate due to the rapid wave of extinctions that has been taking place over the past 100,000 years or so — around the same time as the origin of our species. De-extinction could also help to set right extinctions that are thought to have been directly caused by human activity.

Yet, just because we can bring back any species we chose does not necessarily mean we should. Whether it is correct for human beings to bring back some, or any, species raises significant ethical questions. My position is that de-extinction will be a powerful tool to restore some of the ecological damage human beings have caused, and to do so I feel it is helpful to refute some of the arguments against de-evolution

One position that seeks to refutes any sort of de-extinction at all is that it is not up to human beings to “play god” in deciding which species do and do not exist. Species have always gone extinct, and new species have come about, due to changing environmental conditions and other normal ecological processes. This argument, however, ignores that human beings have been “playing god” to some degree in many of the extinctions that have taken place since the beginning of our existence. To prevent even more extinctions in habitats that are in flux because of human intervention, human beings should not refrain from using whatever tools are at our disposal to address the problem. It was, after all, human ingenuity that drove those species to extinction.

Another big question de-extinction raises is whether our ability to recreate extinct life will make extinction events less meaningful. In other words, whether de-extinction will give human beings an excuse to exterminate a species since that species can always be brought back at a later time. While this point is very significant for ecosystem conservation, it does not stand to reason that the re-creation of a species will ever be cheap and easy enough to make it a more practical option than the avoidance of extinction in the first place. Moreover, it will take, in some cases, the breeding of many generations of organisms to recreate a version of the species that can be released into the wild.

Also, there remains no guarantee that all species will be equally capable of being cloned and brought back. For instance, the carrier pigeon and other birds will be more difficult to clone because their young develop inside hard shells. While mammal clones, such as Dolly the sheep, can be implanted into a surrogate mother to develop, there is no way to do the same through the hard-shells of pigeon eggs. Harvard biologist George Church has hypothesized that by injecting doctored DNA into the sperm and egg cells of rock pigeons, the de-extinction of the passenger pigeon is possible. His hypothesis is that this DNA, which contains both rock pigeon DNA and carrier pigeon DNA, will be passed into the sperm and egg cells of the offspring of the injected pigeons, and that this second rock pigeon generation would produce rock pigeon-passenger pigeon hybrids. By continuing to produce hybrid pigeons, and selectively breeding just those pigeons with many passenger pigeon traits, Chruch hypothesizes that the passenger pigeon DNA can be eventually reconstructed. However, this approach has never been tried before, and it is unclear whether this theoretical approach will work in practice.

Finally, assuming de-extinction is possible and practical, there is the question of what we will do with the recreated species. Many natural habitats in which these species once thrived have been destroyed, and nearly all the world’s habitats are changing drastically due to human development and climate change. The passenger pigeon once lived in huge tracts of forest in the Eastern United States — forest that has been mostly destroyed since its extinction. If scientists are to devote a substantial amount of time and energy towards the re-creation of these species, then it is important that those species can thrive and are not merely re-introduced to become extinct again. If done in combination with ecosystem preservation and restoration, however, de-extinction offers the possibility of creating healthier, more vibrant ecosystems than would have otherwise been possible.

The conversation about de-extinction ethics is likely just beginning. Yet, as we get closer towards making de-extinction a viable endeavor, it is important that we understand how to use this new tool responsibly. Bringing back once-extinct species gives us a tool that will help us restore environments to health in a way we once thought impossible, but it is vital that we recognize de-extinction as just one tool that will not eliminate the current ecological crisis.