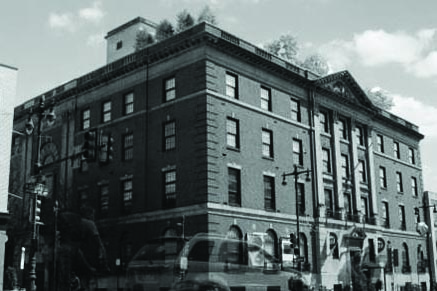 The title of one of two recently opened exhibitions at the Gershman Y galleries of Philadelphia, “Turkey’s Sephardim: Another Look,” implies that there has been a previous look at this unique ethnic group. And, indeed, this sect of the Jewish population, which possesses a blended heritage hailing from Turkey, Rhodes, Iran, Iberia, Morocco, and other nations, has received countless looks from people all over the world — looks of scorn, indifference, and racism. The pain that the Spanish Inquisition afflicted on the Sephardic Jews, who were forced by the Inquisition to flee to Mallorca and Turkey, remains quite a sensitive subject for their descendants. Its tenderness especially becomes evident in the art of Micaela Amato, whose mixed media show, “Qasida/Casida: Los Chuetas Mallorquines,” appears alongside Philadelphia native Laurence Salzmann’s photography in “Turkey’s Sephardim” at the Gershman Y in an adjacent gallery.

When I attended the exhibition’s opening reception, the crowd of approximately thirty to forty people consisted mostly of Jews, with a good number from the Sephardic clan. Instead of focusing on the artistic process at all, the discussion panel with the two artists rapidly developed into a passionate discourse about the concealing of their faith that Sephardic Jews had to endure under the brutal Spanish Inquisition in order to survive. Various audience members shared family stories of the great lengths that Jews went to in order to hide their Judaism. I was the only one to ask a question about the art on view itself, but even this question addressed to Amato — “Why did you choose to work in mixed media?” — received an answer that allowed for an immediate segue into a diatribe on the awful tribulations of the Jews that have occurred for over five hundred years: “Because my people come from a variety of backgrounds, and I was trying to build up in my mixed media real human beings that experienced so much suffering.”

During extern week over Winter Break, I externed with Miriam Seidel’73, the curator of the Gershman Y, and I aided her in crafting this exhibition. As a result, I had already seen the work that would be on display. Without any idea of the intense emotional significance that the mixed media pieces retain for Amato, they appeared as relatively benign, delicate sculptures of ceramic and cast glass. These sculptures, which she modeled on her family members’ faces in order to capture the distinct facial features of the Sephardic Jewish race, had seemed to me as a sort of quaint homage to the artist’s heritage. On the surface, they are small, beautiful sculptures made of glass that glows with dreamy, deeply saturated hues that seamlessly blend into each other, reminiscent of the multiple shades of blue that shimmer in the ocean.

After a glimpse of the artist’s perspective, however, these sculptures have transformed into pieces that are less works of art than they are mediums through which the artist can express what seems to really matter to her, the apparent feelings of stigmatization for her Jewish tradition. With this goal overwhelming the art of the exhibit, it ultimately felt more like an unconventional avenue for discussion of anti-Semitism rather than an art show that was really about the art.

Laurence Salzmann’s photographs, which he took during a trip to Turkey from 1984 to 1989, also drew away from their identity as an artwork, but in a different and strange way. His five-year sojourn originated as a three-month documentary project commissioned to him by the University of Tel-Aviv, but he somehow ended up staying much longer with the Sephardic Jewish community and took thousands more photographs than he had originally planned. Eighteen of of these make up “Turkey’s Sephardim: Another Look.” Although Salzmann claimed that he considered these photographs to be primarily documentary rather than artistic, to me it seems inconceivable that these photographs could be considered anything but artworks. They simply are not the same as the yellowed photographs of civil war soldiers staring dolefully into the camera  with their arms cut off that one might see in a historical museum because it is clear that Salzmann paid attention to the formal qualities of his photographs as he composed them.

One photograph that particularly haunted me was the archival pigment print of the Brit Milah (circumcision) ceremony of the newborn David Hubert Roditi at Divan Oteli in Istanbul. The dramatic lighting of the black and white palette, the crowded composition of six figures packed together in the foreground of the intimate picture plane and the serious but calm expressions of the grown men as they pinpoint their attention so fixedly on the infant makes for a surprisingly powerful image. It is photographs like these in the exhibition that convince me that whether Salzmann consciously thought about it or not, he was thinking about these photographs as an artist, not as an anthropologist.

Since future viewers of this exhibition, which is on view until April 14th, will not see it with the presence and commentary of its artists, the feelings and opinions that the works generate will most likely differ markedly from the impressions that I acquired at the gallery opening. I’m actually not sure which is the best way to experiences these art pieces. The answer to that question ultimately leads to the question of how much the artist’s intention should figure into one’s analysis and appreciation of the art, a question that art critics and historians still debate. Either way, go to this show to see the expression of so many things at once: so many years, so many traditions, so much happiness and so much hurt.