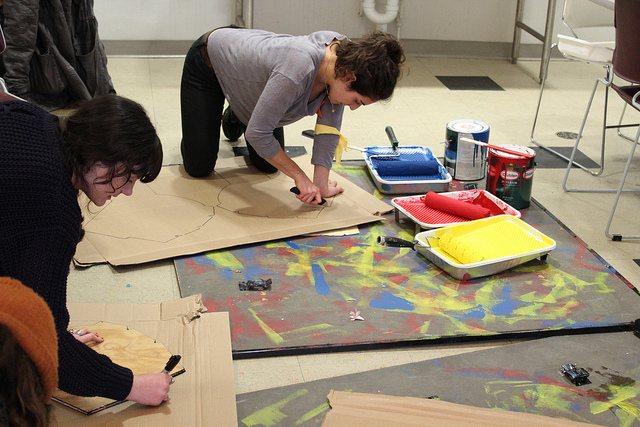 Activists and artists collaborated this weekend in a round-the-clock art space to create the visual imagery used in this weekend’s Power Up! Divestment Convergence, sponsored by Swarthmore Mountain Justice (MJ).  A team of students lead by Sarah Diamond ‘13 worked to create a large visual piece that formed the center of an action on Sunday.

Diamond, recruited by friends involved in MJ to direct the making of a powerful piece of protest art, created a tree of primary-color fists that represented the solidarity and growth of the divestment movement. Despite the fist’s seemingly bellicose image, this weekend’s demonstrations featured only non-violent direct action. Raising the tree signified the culmination of the weekend-long convergence of student representatives from over 70 colleges and universities nationwide.

Spiral Cube, a Philadelphia-based artistic activism group, held a “creative tactics” workshop which armed student activists with skills and materials to implement their vision for a culminating artistic display. “The workshops helped people think about how activism can be effective in unique and exciting ways,” said Laura Rigell ‘16, a member of MJ. Puppet renditions of Mother Earth and skull-masked “suits,” representing corporate executives, surrounded the tree of fists while a stream of black oil coursed down the main Parrish stairs from a bloody rig. The scene centered around a banner reading “Inaction is a choice: Divest now!”

“Political art should be simple, obvious, and involve the activists” Diamond said. In keeping with that idea, she chose primary colors for the cardboards fists to clearly express her intended vision.

Though not officially affiliated with Swarthmore Mountain Justice, Diamond said she wanted to contribute to the convergence for the cause of divestment. “By not acting, the board of managers is making a clear choice: not to divest.” Not content to sit by, Diamond said that her artistic vision and talents could manifest themselves into a moving piece of protest art.

On Saturday, Student-activists milled about Wharton D basement, discussing slogans and protest tactics, while simultaneously sharing their personal stories as to why they had journeyed to Swarthmore College to take a stand within a growing national divestment movement. They grouped themselves into teams, each charged with completing a separate project. According to Diamond, between 25 and 30 Swarthmore students who are unaffiliated with student activism groups were present to assist with the convergence artwork.

According to Rigell, the presence of art in the convergence brought people together. “The tone of the weekend was really positive, and there was a lot of excitement for the future.”

Visual imagery served not only as a rallying point in the convergence, but as a uniting factor for participants. Many of the activists and artists on campus wore orange patches, a symbol that recently originated at Middlebury College as the image of the divestment movement. The orange patches were part of Friday’s action, when students protested the Board of Managers’ silence on the issue of divestment. “Student-activists present at the Board of Managers meeting asked members of the board to take and wear an orange patch if they supported divestment,” said Ben Bernard-Herman ’14, a member of MJ.

Diamond said she hoped her art would have a positive impact on the divestment movement as a whole. “It made sense to lend myself to this campaign, to change the broken system currently in place.”