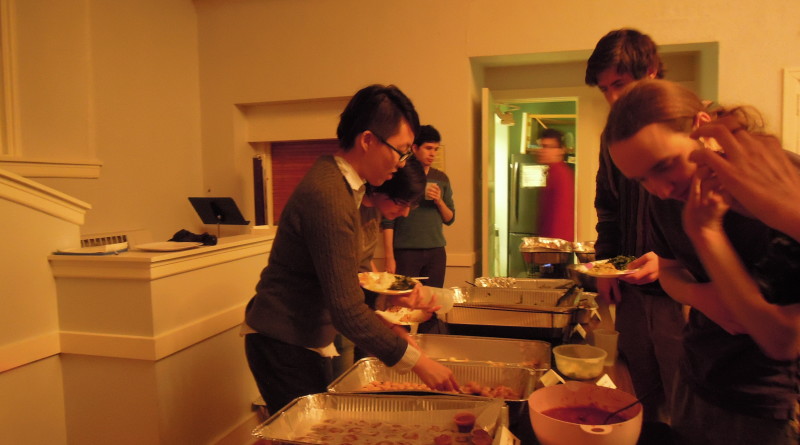 The Swarthmore Queer-Straight Alliance (QSA) realizes that one of the most pressing issues facing LGBTQ youth is homelessness – an issue that is often overlooked by activist groups. Friday’s banquet was organized to fundraise for the Ali Forney Center, a haven that provides housing for LGBTQ youth in New York City that was recently devastated by Hurricane Sandy.

Swarthmore students donated whatever they could afford between $3 and $20 and were treated to a feast of homemade treats at the Friends Meeting House. The Meeting House was filled with students enjoying everything from pad thai to chocolate blueberry cookies, Israeli couscous to blue cheese risotto, all made by volunteer Swarthmore students.

Representatives from the Attic Youth Center, an organization that provides services and support for LGBTQ youth in Philadelphia, spoke about the center and their own personal experiences. In addition, students involved with the Student Run Emergency Housing Unit of Philadelphia (SREHUP) shared their stories about volunteering at one of their shelters.

Many attendees were not aware of the extent to which queer youth are represented in the homeless population – 40 percent of homeless youth identify as LGBTQ, while only five to ten percent of the general population identify as such. Often, queer activism is associated with issues such as legalizing same-sex marriage – a hugely important cause that is, however, only relevant to those fortunate enough to be worried about taxes and health care benefits.

QSA Co-President Joan Huang ’15 said that one of her main goals for the event was “raising awareness that there’s this whole variety of experience […] Not everyone has the opportunity to go to college,” she said. She expressed frustration with focusing on “upper-middle class white queer experience,” stating that “the dominate narrative of marriage is seen as assimilation.”

Ian Perkins-Taylor ‘13, a former QSA president, agreed. “There’s a pervasive stereotype of queer identity as being gay, male, white, and upper class,” he said. It is imperative to remember that people from all different backgrounds, races, and situations identify as LGBTQ and often must deal with multiple forms of prejudice. Unfortunately, he points out, queer homeless youth is “something seen as a problem […] seeing them as an eyesore and a problem you want to brush under the rug,” he said.

Huang sees Dan Savage’s “It Gets Better” project as an example of activism that focuses on too narrow of a subset of the population. The “It Gets Better” project was founded on the premise of providing hope to queer youth by promising that life after high school will get better and will be worth waiting for – often with the assumption that one will have the ability to leave a bad environment and find refuge in a more progressive community. “It doesn’t get better, you have to make it better […] You have to do things concretely,” Huang said. Perkins-Taylor agreed: “From a political standpoint, ‘it gets better’ has to be ‘we have to fight to make it better.’” The QSA banquet was organized, Huang says, as a concrete step towards a better future for queer youth.

At the banquet, representatives from the Attic spoke first. The director of the Attic’s education and outreach department started off the presentation, introducing himself as Evan. He explained that many queer homeless youth have dealt with issues including substance abuse, physical abuse, and sexual assault. Many are forced to resort to survival crimes such as drug dealing, stealing, or prostitution. Twenty-five to thirty percent of queer homeless youth experienced violent reactions when they came out. The age at which youth are coming out has progressively decreased, and is now as young as an average of age 13 for transgender youth, he said.

Next, another Attic employee who introduced himself as Kemar spoke about his experience being homeless. Kemar lived in Lower Merion, PA, when his mother threw him out of the house after she found out he went on a date with another boy. She threw his belonging down the stairs and out the window and took his key. Even his grandmother, who had helped to raise him, wouldn’t let him into her house, telling anyone who asked about his absence that he had died. Kemar lived on the street and in shelters until he found a place to live in Northern Philadelphia with friends. He had to wake up at 4 a.m. to go to high school in Lower Merion, but ended up persevering and graduating. After discovering the Attic, he received help finding housing and getting into college. “I really accredit it all to the Attic,” he said. The next speaker, Monica, lived in a homeless shelter after her mother refused to accept her identity. She also felt indebted to the Attic and Kemar in particular.

Finally, the SREHUP representatives ended the night with brief statements. SREHUP had come to a QSA meeting to recruit helpers, and last year, some QSA members volunteered at some SREHUP shelter over winter break due to a shortage of volunteers. One of the representatives, Daniel Cho ’13, described spending time with the guests at these shelters when he volunteered for the overnight shift on Friday nights. The group is always looking for helpers for what they describe as a fulfilling and important cause. For those interested in the Attic or SREHUP, visit http://www.atticyouthcenter.org/ and http://srehup.org/.

Correction: The Daily Gazette originally reported the group is called Queer Student Alliance. The group is the Queer-Straight Alliance (QSA).

Correction: The Daily Gazette originally reported the director of the Attic’s education and outreach department is Kevin. His name is Evan.