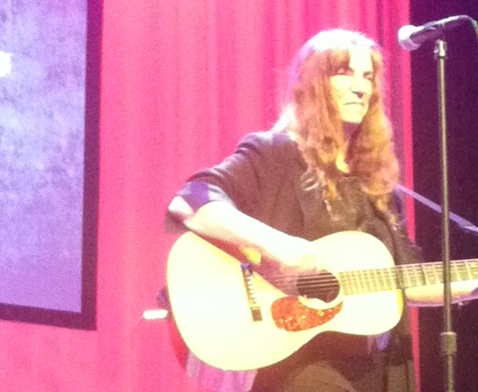 On the cover of her National Book Award-winning memoir Just Kids, “Grandmother of Punk” Patti Smith scowls through her roughly-hacked bangs. Robert Mapplethorpe, her lover and friend, squints, wearing the skull necklace she gave him around his neck.

The Patti Smith who spoke, read, and rocked at Bryn Mawr’s Goodhart Theater last Thursday couldn’t stop grinning. In fact, she poked fun at the culture of “appearing above it all” that was prevalent when she was coming of age in New York City. Between smiles and quips, she even took a moment to imitate her own youthful dour pose in a hilarious moment of straight-faced slouching. Smith had every right to be jovial. Her book had made it big, she was being honored by Bryn Mawr’s Katherine Hepburn medal, and she was the first recipient of an advance copy of My Bloody Valentine’s new album.

It’s not merely her many successes, however, that make Smith so content. She started out hardscrabble in the city, saving nickels for a sandwich from the Automat once she found a place to live. Even in the midst of her later ground-breaking career as a musician, artist, and writer, she suffered the losses of many friends, including Mapplethorpe, who died of AIDS-related complications.

She described one period during which she lost her pianist, brother, and husband – and still found a way to continue work on her book, through her heartbreak. “It was very hard for me to write a book about love and friendship, but also loss,” she said. The fact that the tight, poetic result represents love and loss so skillfully shows that Smith has found a way to encompass both in her life – a reason in itself to smile, the acknowledgement that moments of frowning can be equally beautiful.

In her opening patter with the audience, Smith recalled both the joys and pains of being in college before she dropped out. She mainly enjoyed “the freedom of just walking around the campus, being myself,” she said. “All you really want to do is listen to Jimi Hendrix and drink wine.” She recalled a semi-recent memory, listening to Hendrix’s Electric Ladyland on a tugboat in Detroit on her son’s birthday. It was one of the greatest nights of her life, she said, blasting the music at midnight. “I was like, okay,” she said. “You can take me.”

Smith kept up a steady rapport with the audience, offering mature advice one moment (“As you go through life you’ll have things you want to do or things you want to write […] it could be anything in life you think is too overwhelming […] If it’s important to you, don’t give up”), and the next leaning in and admitting, with a sideways smile, “I don’t actually know what I’m supposed to be doing.”

She quickly figured it out, launching into an intimate reading from Just Kids about being mistaken for a young man by Allen Ginsberg, who bought her a sandwich and coffee before realizing his error. At one point, Smith stumbled for an instant on the word “metabolized,” stopped, rolled her eyes, and said with self-chastising sarcasm, “It’s a big word.” This led to Smith recounting the story of Ginsberg’s death to the audience – a serious moment made brighter with mentions of Buddhist chanting and sacred cookies, again striking that careful but necessary balance between dark and light.

In Ginsberg’s apartment, Smith remembers taking a book off the shelf, something by William Blake, and seeing that Ginsberg had rewritten the work in the margins. She recalled that Blake himself did the same to John Milton’s Paradise Lost. The anecdote says something about recreation, about art as re-appropriation, about the cycle of rebirth, about the string of influences leading to and from every artist, including Smith herself. The story led into Smith’s performance of “My Blakean Year” – “That was sort of a segue, right?” she asked. Her voice, raw and unexpected as ever, transfixed. “Brace yourself for bitter flack for a life sublime/A labyrinth of riches never shall unwind/The threads that bind the pilgrims’ sack/Are stitched into the Blakean back,” she sang. Her singing voice took on a hard-edged, dangerous quality that somehow didn’t seem at all false – it had been part of her the whole time, sewn into the seams of her skinny jeans, hidden in the creases of that smile.

Another song, “Grateful,” again showcased Smith’s lyrical dexterity, while the chart-topper “Because the Night” – sung a cappella – got the audience singing along. Smith had to take a few breaths before diving into that one, covering her face briefly when the audience cheered her on. Singing without her guitar was something she would have been too embarrassed to do in her youth, she said. It still unnerved her. “Don’t sweat being embarrassed,” she told the audience. “Everybody’s gonna look like an asshole sooner or later.”

Smith answered questions from audience members throughout the event. If she could go back in time and give her younger self some advice, it would be to get her teeth professionally cleaned and spend more time listening to her mother’s stories and knowledge, which she will never again have access to. “Our parents can drive us crazy, but they know stuff. And they know stuff about us,” she said. In regards to what makes her happy, Smith answered that she feels happy “a million times a day,” due to everything from a good meal to a fox sighting. “I’m basically a very happy person,” she said. Not that she doesn’t ever feel grumpy or sad, she hastened to add. A full life, it seems, is painted with the whole range of the palette.