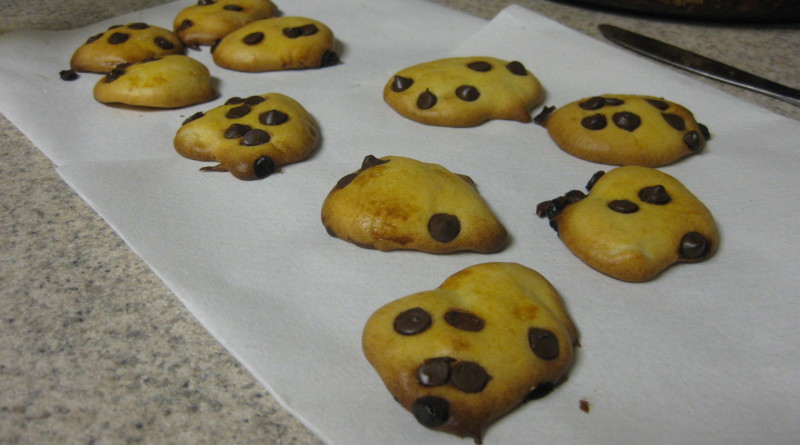 This week I decided to make Sugar Puffs from Smitten Kitchen. They looked simple enough, though different from anything else I’ve baked. In fact, they were actually weird and confusing. I had a few false starts and had to tweak the original recipe. I am still not totally satisfied, but, after a few hours, they were pretty good.

1. Watch Pretty Little Liars forever. Don’t ever watch anything else. Before you start baking, think a lot about which pretty little liars’ style is most like yours.  I wish my style were more like Spencer’s, but in reality I think it is more like Emily’s. Cool, now you can move on.

2. Preheat the oven to 425 degrees Fahrenheit. I initially set to 475 degrees by accident, and it went horribly.

3. Find a pot or saucepan or something you can put on a stove.

4. Cut up the butter into tiny pieces.

5. If you’re daring, pour in more sugar than the actual ingredients. These cookies turned out a little more savory than I would have liked, and while I did not really get to  experiment with the levels of sugar, I think I was safe from going totally amiss.

6. Have your flour measured out beforehand. I initially used the amount of flour specified in the recipe. It never developed into the dough it was supposed to, so I scrapped it and started over. This was devastating. Measure out at least two cups of flour, and you can always use less.

7. Pour the water, salt, sugar and butter into the pot.

8. Set the  the stove top on “medium” and gently stir the pot continuously as the butter melts.

9. Once the butter is melted take the pot off of the stove.

10. Immediately mix in the flour. Start with the one cup, but if it does not form into a sticky dough add more. It should become sticky and ball-esque.

11. Let it cool for about five minutes, or just estimate. You can watch One Direction’s “Kiss You” 1.5 times. Start many conversations about #Haylor with your friends and family.

12. Mix in the eggs one at a time. I ended up mixing in more flour after that since it was too thin, but I’m not sure how that affected the final product, negatively or positively.

The original recipe says you can refrigerate the dough for up to a day, but I just made the cookies immediately.

13. Make the glaze by separating an egg and mixing the yolk with some milk. I also tried mixing in some powdered sugar. I can’t tell that it made any difference, but you may as well, you know? Live While You’re Young.

14. Put parchment paper on a baking sheet. Using a spoon or whatever you want, really, scoop the dough onto the sheet. Brush the glaze on the top of each puff. Sprinkle mini chocolate chips on the top of each.

15. Put it in the oven for 15-35 minutes. I took mine out after 15, but the original recipe said 20-35. They should be bronzed and puffed. I think that even if they don’t puff-up, it’s still alright and the taste will be the same.

17. Try one! It’s alright! Maybe it’s not as good as you wanted it to be, but maybe you should get used to your own mediocrity. Sorry, that was harsh. You’re doing great.

Clean everything up, and you’re done!

I would recommend waiting a few hours, though they tasted a lot better than right after they were baked.

Let me know what you thought! See you next time!