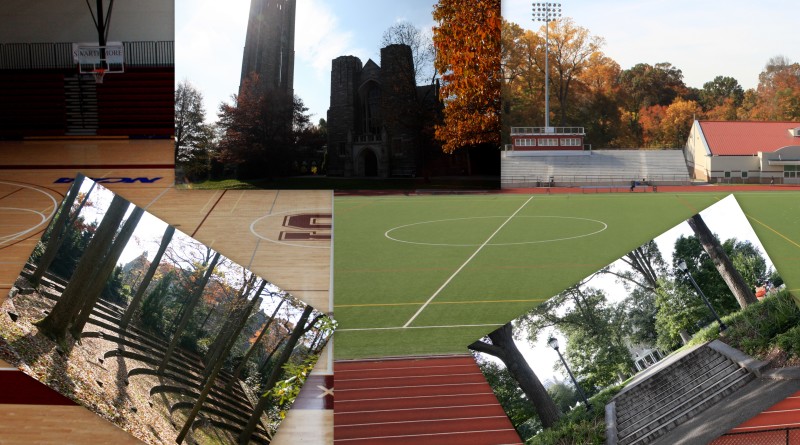 Kayla Moritzky ’14 banked in a buzzer-beating three from the wing to give the first-place Swarthmore College women’s basketball team (16-3, 12-2 CC) a 68-66 victory over Muhlenberg College (11-8, 8-6CC) in Centennial Conference action Wednesday night in Tarble Pavillion.

Down by one with 5.7 seconds to play, Moritzky was fouled driving to the rim but put both free throws off the back of the iron.  But the Mules couldn’t corral the second miss and Eliza Polli ’13 grabbed the offensive board and found Moritzky popping outside the arc for the game-winner.

Nicole Pepe hit two three-pointers and Clawson sunk a jumper to tie the score at 65 with 1:37 to set up the late game dramatics as the Mules climbed back from a 14-point deficit.

With the victory, Swarthmore completed a regular season sweep of Muhlenberg – its first against the Mules since the 2004-05 season.  The Garnet won in Allentown by a 66-56 final in November.

Wednesday marked the sixth time this season that a women’s game has ended with a scoring margin of four points or less – the Garnet has claimed victories in five of those six down-to-the-wire games with the only loss coming this past Saturday to Gettysburg.

Three Garnet players finished with double-figures.  Katie Lytle ’14 and Polli finished with 17 each and Jess Jowdy ’16 notched 16 points. Swarthmore connected on a season-high 13 three-points, including five from Polli and three each from Moritzky and Jowdy.

Lytle added 11 rebounds to collect her eighth consecutive double-double, and 13th on the season, while adding four assists and three steals. Moritzky tallied eight assists and four steals in the winning effort.

Kate Clawson led the second-half effort for the Mules with 13 points, including a free throw that put Muhlenberg in front 66-65 with just over one minute remaining. Alita Zabrecky finished with a team-high 15 points and Leeann Lanza collected 11 points and seven rebounds.

The Garnet opened up large leads throughout the game Wednesday only to see the Mules battle back time and time again.

Lytle opened the game with seven of Swarthmore’s first 10 points to take a 10-2 lead at 15:10.   Five minutes later, with the Mules in the midst of an 11-3 run,  the Garnet led by just a single point 16-15.  Again, Swarthmore opened the margin with two treys from Polli and one from Jowdy to jump ahead 29-17 with just under four minutes to play in the first half before an 11-0 Muhlenberg run sent the Garnet to the locker room leading by the slimmest of margins.

For the first six minutes of the second half, the score stayed tight until three-pointers from Moritzky and Izzy Bellezza ’16 put the Garnet ahead 43-34. Swarthmore would pull ahead by as many as 14 points in the middle of the second before the Mules began, yet again, another comeback.

Swarthmore will travel to Johns Hopkins this Saturday for a 3:00 p.m. match-up with the Blue Jays.  The Garnet is looking for revenge against a Hopkins team that handed Swarthmore one of its two Centennial losses this season.