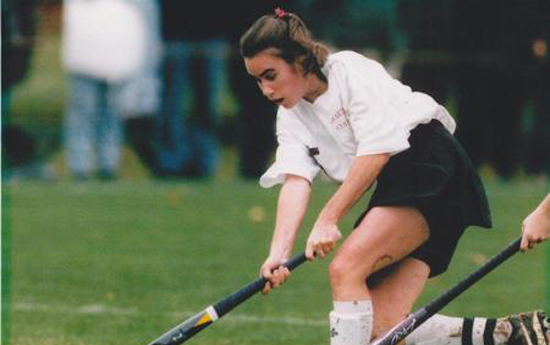 Ted Dixon, head track and field coach at Swarthmore in 1998, still remembers his first impression of Danielle Duffy ’98.  “She was tiny.”

Yet, the milestones she reached, the records she set, and the legacy she left on both the field hockey and the track and field programs are anything but small. Now, Duffy works as a cardiologist and assistant professor of Medicine at Thomas Jefferson University where she specializes in cardiovascular disease in women and cholesterol disorders.

Always interested in pursuing science, Duffy was initially convinced to attend medical school after spending a few summers conducting research for a pharmaceutical company. “Internal medicine captivated me,” she said. “You often have to be a detective trying to sort out the data and make all the pieces fit into a diagnosis that makes sense.”

Now, Duffy splits her weekdays between seeing patients in the office, doing cardiac imaging – interpreting echocardiograms and stress tests, and consulting with patients in the cardiology services. Between all her responsibilities, plus her days spent teaching her medical students and cardiology fellows, it’s rare that she finds herself with any spare time.

However, Duffy doesn’t mind one bit. “[This] fit[s] with my personality and even my sports background, especially the need to counsel patients on having a good lifestyle with a healthy diet and regular exercise,” she said.

Even though her current career may not involve sprinting down the track or after a field hockey ball on the grass, it still reveals her characteristic ambition and determination to succeed. When asked if surprised that Duffy ended up in the medical field, Dixon answered simply, “not at all.” Similarly, when asked whether she expected Duffy to become a doctor, former field hockey Head Coach Karen Borbee said “it doesn’t surprise me at all.”

On the track, Duffy was known as quiet yet fiercely competitive, balancing the 100 meter, 200 meter, 400 meter, 1600 meter relay, and 400 meter relay with a seemingly impossible ease.  “She was the cog in all our races . . . she was the cornerstone of the team,” Dixon said.

Duffy’s role on the team during her four years as a runner was crucial as she took the team to conference titles in ’97 and ’98. She also carved out a spot for herself in the Garnet record books, winning eight Centennial Conference gold medals and earning the title of Most Outstanding Performer in ’97 and ’98. “She was a lead by example type . . . there was no mistaking her intensity,” Dixon said.

Field hockey was no different, as Duffy took her team to three consecutive Centennial Conference championships from ’95- ’97, the program’s only NCAA Playoff appearance in ’96, and the ECAC Championships in ’97. Borbee acknowledged the role Duffy played in raising the program to such heights, saying, “she was a milestone for the program.”

Despite being a dominant force on both teams, Duffy was remembered by both of her coaches as never the loudest on the field. “She was a quiet leader . . . very soft-spoken,” said Borbee. Similarly, Dixon recalled that “she would never complain; she would just do it.”

According to Duffy, this was the key to her success – on the track, on the field, and in the medical world. Balancing her athletic world with her academic and extracurricular lives at Swarthmore was hardly easy; “it’s difficult to play two varsity sports,” Borbee admitted. But the challenge only motivated Duffy to rise to the test. “I worked hard to improve. That work ethic has certainly carried over into my daily life now,” she said.

Looking back, Duffy has her teammates and coaches to thank for her fondest memories at Swarthmore. “The most memorable times were often the times before and after games that were spent bonding with my teammates on both teams,” she said. “[They] were all hard workers, and were always enthusiastic about their courses . . . it was always interesting conversation in the vans on the way to away games.”

Thinking back to her last field hockey game at Swarthmore, she distinctly remembered finishing her senior season caked in mud. “Several of my teammates were so covered by the end of the game that we all just started having a mud fight so that we all could experience the mud in celebration of our win,” she recalled.

While she may not be donning Garnet jerseys with her colleagues at the hospital or the university, Duffy still sees them as her teammates. “In medicine, you often need to work as a team, whether it be as a team of doctors or as part of a multidisciplinary team,” she explained.

With all that Duffy has managed to do for the track and field and field hockey programs, along with what she hopes to achieves as a cardiologist and a professor, anything she accomplishes shouldn’t come as a shock. However, despite having seemingly done it all, she still managed to surprise Borbee at the Garnet Hall of Fame opening ceremony on October 26, 2012, where she was inducted into the inaugural Class of 2012.

“What did surprise me was how much she looked the same,” admitted Borbee.