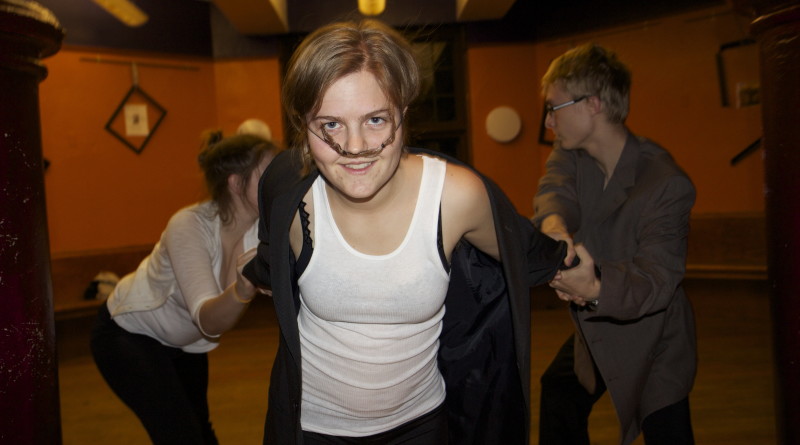 Salvador Dali, the inscrutable, mustachioed figure both at the center and not of The Horizon (Line), was especially inspired by the painting The Angelus by Jean-Francois Millet. Millet’s portrait of two figures bowed over a basket in a field shows up in several of Dali’s surrealist works. Dali was drawn to the basket and its mysterious contents. It appeared to hold fruit but, apparently, he felt that there was something more.

It turned out that he was right – years later, x-rays revealed the casket of a small child in the original painting, a layer of paint below. He of all people understood that things are rarely as they seem. In Dali’s Angelus-inspired paintings, however, there is neither basket nor casket. There are shadows and clouds and the two figures, twisted but still recognizable, and peering down at … something. But Dali provides no answers.

Neither does The Horizon (Line), a devised theater piece directed by Josh McLucas ’15.

The Horizon (Line) was created by an incredible team of actors who worked all semester with McLucas, playwright Samuel Swift Shuker-Haines ‘14, and movement coordinator Stefan Masure ’15 to create an interactive, mind-bending celebration of … something. Throughout the one hour performance, you begin to realize that it doesn’t matter if you understand what you are a part of – you just feel lucky to be a part of it.

The show began with McLucas’s fascination with surrealism and dreams and a few sample scenes written by Shuker-Haines. The rest was crafted through months of improvisation. McLucas led exercises that would often center around building a simple scene and then introducing some element of chaos. The actors were also often asked to riff on certain themes or moments in Dali’s life, from a specific painting to his relationship with his brother. Then, McLucas would introduce disorder by changing the setting to outer space, or a bathtub. This type of improvisation “forces [the actors] to change, change the image they had of their character, test the extremes,” Masure said.

“We were following impulses rather than being dictated by an outside force,” said actor Sung Won Ma ’16. For her, the most rewarding rehearsal experience was being instructed to hold the weary pose of one the figures in The Angelus. She remembers standing perfectly still and slowly being consumed by a foreign feeling of fury, having tapped into a hidden reserve of emotion that helped to fuel her future performance.

Shuker-Haines attended every rehearsal and recorded the entire process, later transcribing the improvised scenes and paring them down into a rough outline of a play. The actors then played with this structure, seeing what worked and what did not, eventually creating a solidified script of sorts, a conglomerate of many minds and hours.

The result eludes description and is, in fact, purposefully challenging. “I want [the audience] to rethink everything they thought about what it means to be an artist […] and to re-evaluate the value of art and the meaning of art,” McLucas said. Shuker-Haines suggests that the first theme of the show, and a direct quote from the play, is, simply, “Fuck you, this is art.”

The show pushes the boundaries of not only college theater but performance art in general, challenging the audience to attempt, and fail, to define what they see. Here is what I saw: There is brave, honest nudity, and beautifully choreographed silent dances, and anger, and infinite love. There is Dali, his parents, his wife Gala, and Gala’s former husband Paul. There is ethereal original music, composed by Trip Lenahan ’15.

“There is unlikely to ever be another theater performance at Swarthmore including platypi, elephants, vivisection, sex, walking on ceilings, auto-cannibalism, the salt flats of Utah, police brutality, unintentional suicide, and dead twin brothers,” said actor Ben “Books” Schwartz ’13. He may very well be right.

Intentional disorientation, Shuker-Haines said, is a central goal of the show. “We’re fucking with you” is theme (and direct quote) number two. “If you leave a piece being able to too easily understand what it was, then you actually learned nothing,” they said. Do not attempt to figure out what is in Millet’s basket. Expect, and embrace, discomfort. Try to revel in the absurd, the meaningless, the gray area. Feel yourself filling with a thousand questions and acknowledge each one as you let it go. This is a unique and important performance, better than a dream – don’t ruin it for yourself by waking up before you have to.

Why does it matter, anyway, what is causing the figures in The Angelus to bow their heads? Whether it is fruit or a child or a half-eaten beating heart, we feel their sorrow as acutely and intuitively as Dali did. We feel it through the two layers of paint. We feel it through Dali’s distortions. And you will leave The Horizon (Line) feeling something – maybe fear, desire, or the stubbly beginnings of a mustache.

“I attempt to create a moment of experience for an audience,” Schwartz said. “Whatever the audience takes away from that experience is their mistake. I merely aim to create interesting mistakes.”

The Horizon (Line) will be performed Friday, November 30 at 7 p.m., Saturday, December 1 at 2 p.m. and 7 p.m., and Sunday, December 2 at 2 p.m. in Paces. Due to extremely limited seating, potential audience members are advised to reserve seats immediately by emailing ttinsle1@swarthmore.edu.