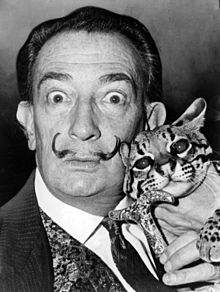 With tears in his sometimes green, sometimes blue eyes, Josh McLucas ’15 related the sometimes tragic, often challenging, ever exciting process of creating “The Horizon (Line): Salvador Dali Fucks With You For An Hour In Paces,” the first devised piece by Swarthmore’s new theater troupe, Architectonic Laboratories.

“It started as ‘Dali gives a lecture about his life and maybe it turns into some crazy shit,’” McLucas said in an interview. “We tried to explore all the major aspects of his life, his relationships with his parents, with his muse and eternal love, Gala, and her ex-husband Paul Elluard, the surrealist poet, who lived with them for awhile.”

McLucas said it is hard to define a specific plot, but that the play loosely follows Salvador Dali’s life.

The play is a devised work. As a general rule, this means that the play does not follow a traditional script, and that the play is created collaboratively by the group working on it. For McLucas, the process began last summer, when he and the creative team (playwright Swift Shuker-Haines ’14, Producer Anita Castillo-Halvorssen ’15, Stage Manager Treasure Tinsley ’15, Costume Designer Dyan Rizzo-Busack ’15, and Sound Designer Trip Lenahan ’15) “threw ideas around.”

This concept of throwing ideas around played into their entire process. McLucas stressed that first and foremost, the devised process is about collaboration. “Essentially, everyone on a team, regardless of position, has equal say in how we go about making this thing.”

Yes, as the director, McLucas can accept or reject various ideas, but he likes to keep the flow of ideas completely unrestricted from everyone on the team. The end result is a show that is created by the actors and the creative team.

Their audition process points to the qualities that McLucas found especially important in his actors. “Auditions consisted of a scene that Swift had written over the summer, so the first time through it was a cold reading, the second time it was read it through and continue off book through improv, and the third time it was to interpret the scene through movement to a track that Trip made,” he explained. “It was really just to see how adventurous people were going to be. It’s not about picking the ‘right’ thing to do or doing the scene or movement correctly, but it’s about doing it in a way that is correct to you. Committing to what you feel is the way it should go. Making a choice.”

In the end, what is this play? It’s a combination of scripted work, improvisation, and movement. More specifically? “No one’s really gonna know what this is until it actually happens,” said Producer Anita Castillo-Halvorssen. “Not even the actors.”

For an intense hour of surrealism, chaos, and excellent theater, come to Paces Café this weekend! The shows are on Friday at 7 pm, Saturday at 2 and 7 pm, and Sunday at 2 pm. There are only about 30 seats per show, so email ttinsle1 to reserve tickets.