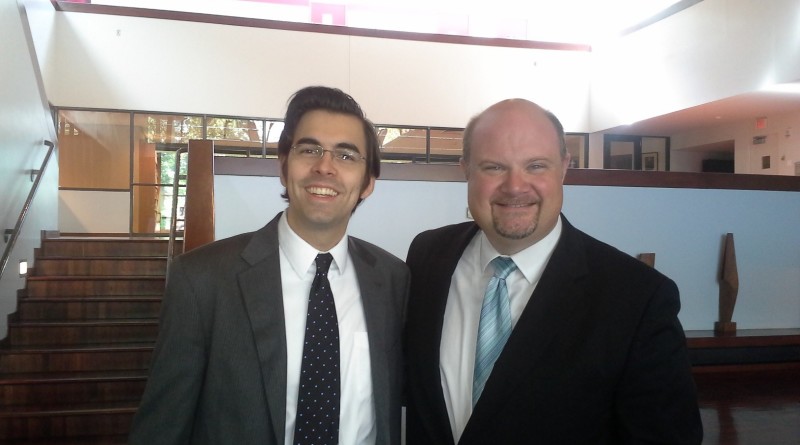 Andrew Hauze ’04, pianist and associate in performance at Swarthmore, teamed up with world-renowned baritone Randall Scarlata to give the first Midday Monday Concert of the year. Hauze and Scarlata performed a rich selection from the 19th century based on Johannes Brahms, exploring the ways in which different composers set texts to music. Monday’s selection included Brahms, Gabriel Fauré and Charles Ives, each representing a different musical tradition.

Scarlata and Hauze began with the desire to perform the Brahms pieces together. These Brahms pieces have held a special significance for Hauze specifically: he was introduced to them by the woman who would later become his wife, while he was a junior at Swarthmore. He then became involved in an Orchestra 2001 performance of Brahms’ second concerto.

That same year was the first time Hauze heard Scarlata sing. Hauze was the Assistant Conductor for an Orchestra 2001 concert performing pieces by composer Gustav Mahler. Later in their careers, Hauze and Scarlata met at West Chester University, where Scarlata currently serves on the faculty and where Hauze taught church music until three years ago.

Last year, Michael Johns, Associate in Performance and Director of the Elizabeth Pollard Fetter Chamber Music Program (including Midday Monday Concerts) asked Hauze if he would be interested in performing a concert this semester. Hauze agreed, and set up the collaboration with Scarlata.

“[Scarlata] had been looking to do something together again,” Hauze said.

Scarlata and Hauze’s individual and collective talents shone through on Monday. They performed Brahms’s bitter, solemn texts with a richness that reverberated throughout Lang Concert Hall. The two were keenly attuned to each other, increasing and decreasing their expressivity in harmony.

According to Hauze, “Brahms’s approach to setting text to music is very tied to the language, German syntax and the sound of the words.” Hauze described his own journey with the Brahms pieces as being purely musical at first, since he didn’t know German when he first encountered them. The pieces are “strange, enigmatic and beautiful,” he said. “There are beautiful rays of sunshine at the end, but I could feel this heaviness.” The pieces, he said, are based on apocryphal scripture and are “consumed with death.” Brahms wrote them very near the end of his life.

“That’s what I love about Brahms: he can approach the darkest, most troubling human experience, death, [and move] towards transcendence and resolution, and descend into the greatest depths,” Hauze said.

According to Scarlata’s introduction, he and Hauze chose the other composers “based on what else was going on at the time.” Both Fauré (French) and Ives (American), he said, were grappling with the pervasiveness of the German tradition in music. “They’re three radically different approaches to setting text,” Hauze said. “They’re good contrast.”

The Fauré pieces were all based on texts by poetry by Paul Verlaine. “The Verlaine poetry was almost like his soul mate,” Scarlata said. “It enabled him to bring all the colors in the music to life.” Hauze said that though Scarlata had performed Fauré publically before, Hauze himself never had. However, he fell in love with the pieces, and “wanted people to hear them.”

Hauze said that though the music they performed was technically and stylistically difficult, collaborating with Scarlata was easy. Scarlata was very experienced in the pieces they performed, particularly the Fauré selections. “He was a great help to me in finding an approach,” Hauze said, noting that this was difficult due to the different approaches each composer took towards setting text to music.

The Ives pieces, Scarlata explained, were influenced by Ives’s childhood “musical experiments” and experience around marching bands. Scarlata encouraged the audience to “see what it does to your mind.” Both Hauze and Scarlata endowed their roles in these big-band/Broadway-esque pieces with unique characterizations and humor.

The duo will perform again at a West Chester University faculty recital at a longer evening concert. Hauze said he looks forward to performing Fauré again: “Every time you perform any music you come closer to the music,” he said, especially “how to project [the piece’s] meaning through the piano.”

The next concert in the Midday Monday series is the Dolce Suono Ensemble on November 5. The ensemble is a flute, piano and percussion trio and will perform Jazz and folk and pop music from Latin and Jewish traditions.

Midday Monday Concerts take place on the first Monday of every month at 12:30 p.m. in Lang Concert Hall.