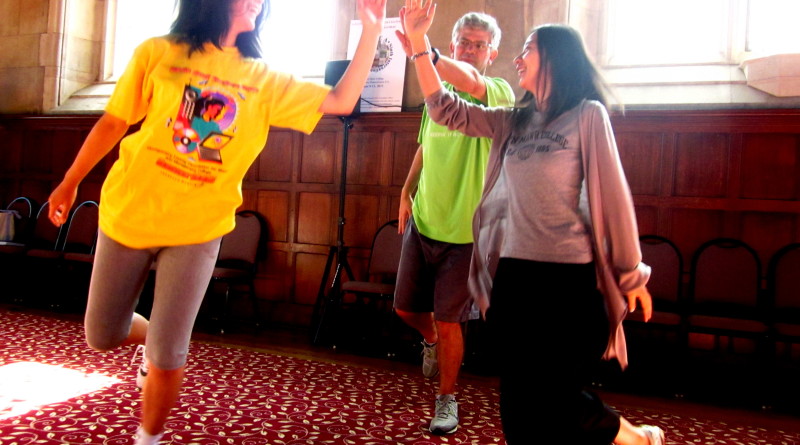 Dancers and patterns collided as a group of students  from Swarthmore and Bryn Mawr colleges rehearsed for tomorrow’s performance, “When Patterns Collide: Math + Dance.” The dancers bent and swayed, improvising gentle, graceful movements in front of a laptop webcam. Their pointed toes and curved backs were reflected back at them forty times over as a computer tessellation program multiplied and morphed the video feed into a complex, shifting kaleidoscope of color and movement, projected onto the opposite wall.

The dancers were rehearsing with choreographer and dancer Dr. Karl Schaffer, one partner of the dance company “Dr. Schaffer and Mr. Stern” and a math professor at De Anza College.

Schaffer, who is visiting the Tri-Co this month as a guest of the new Mellon Tri-College Creative Residencies program, has devoted much of his life to exploring the intersections between mathematics and dance, and he has brought that passion to Swarthmore. He has been overseeing interested students and faculty as they experimented with “structured improvisation,” as well as introduced more purposeful choreography, all inspired by mathematical concepts like tessellations.

After eight rehearsals, the dancers will be ready to perform a final showing of their work tomorrow in the Troy Dance Lab. From 4:30 to 5:00 p.m., the group will present a participatory movement preview of some of the ideas central to the showing. The preview will allow participants and attendees to learn, as Schaffer puts it, “distinctions between several types of symmetries by moving according to those symmetries.”

Schaffer has always been interested in dance and mathematics, but it wasn’t until the 1980s when he was working with fellow choreographer Erik Stern that the two disciplines collided for him. He and Stern both “like to make dances that have some sort of concept at their base,” Schaffer explains. They also share a knack for breaking the rules in dance. Stern happened to also have a background in the sciences, so it was natural that the two “began…looking for the math principles embedded in choreography.”

Schaffer said he strongly believes that the two disciplines are entirely related. As a few examples, he pointed out symmetry (between arms and legs, but also between bodies and within a single body), counting, rhythm, momentum, mass, connection, sequence, and shape. “Every area of math can be expressed with the human body,” he said. In fact, Schaffer said he doesn’t believe in a huge disconnect between math and dance. As he says, “There is a science of dance just as there is an art of mathematics.”

Schaffer and Stern have received funding from the National Endowment for the Arts, the California Arts Council, the Cultural Council of Santa Cruz County, and the Community Foundation of Santa Cruz County. Their dance company began, however, as simply the show “Dr. Schaffer and Mr. Stern: Two Guys Dancing About Math,” a piece that they performed over 500 times across North America. Since that first show the two have created several more including “Imaginary Numbers,” “Twirl,” and “Writing in the Sky.”

“When Patterns Collide: Math + Dance” uses tesselations and patterns to bridge the gap between seemingly disparate fields of study. Their tessellation-inspired movement alone was mind-bending: ethereal but also inherently logical.

Tessellations are most often associated with the artist M. C. Escher, but Schaffer has based shows, including one titled “Daughters of Hypatia,” off of sketches by the artist Marjorie Bryce. Tessellation is essentially the repetition of geometric shapes that fit into one another, like Escher’s fish that morph into birds. Although the dancers identified a few structural flaws in the medium of projection, including the fact that it was difficult to focus on both their own movement and the distorted reflection simultaneously, they were able to rise to the challenge, working together to create tableaus that would be striking without the added element of the tessellation. At one point, one dancer pointed a leg high into the air, keeping her hands on the floor. A second dancer wrapped herself around the extended leg, helping to perpetuate the shifting, dynamic quality of the piece, a tessellation in itself.

Schaffer’s work with Tri-Co students was made possible by the new Creative Residencies program, coordinated by Tom Bonner, a new staff member of Haverford College. The idea for the program began at Haverford, when the college received a grant in 2007 for multi-disciplinary artist residencies.

In addition to Schaffer, Bonner has arranged to bring various other artists to the Tri-Co community through the Creative Residencies program. In an upcoming residency Bonner will bring two artists to Tri-Co who explore themes of disability in their work.

“What Can a Body Do?” will exhibit work from Christine Sun Kim, a hearing-impaired artist who creates art through blasting paint through subwoofers, and Carmen Papalia, a visually impaired performance artist who guides people on blind walks. The exhibtion will be presented alongside a related exhibit at Haverford’s Cantor Fitzgerald Gallery.

What really stands out about Schaffer’s work and the work of artists like Kim and Papalia is its ability to bring together multiple subjects, creating a creative crossover that widens our perspectives about each individual component. From color representing sound to math and dance relating symbiotically, these pieces do what art does best: allows us to see the world in a slightly different way.

The showing of “When Patterns Collide: Math + Dance” will take place Wednesday at 5:00 p.m. in the Troy Dance Lab, followed by a question and answer session with the dancers.