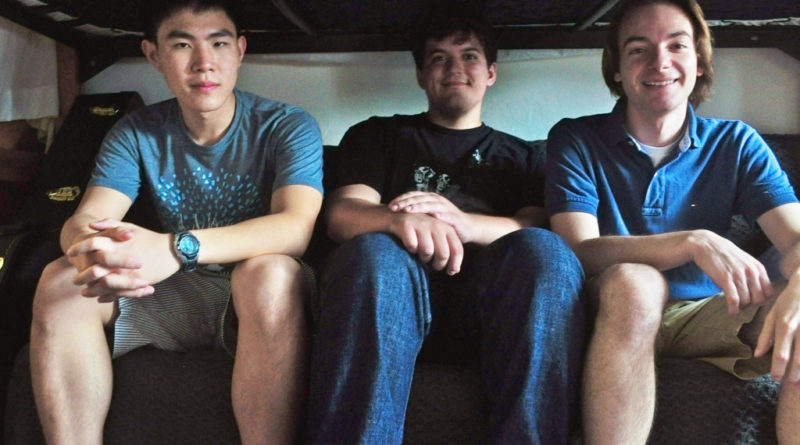 Freshman rooming assignments do not always work. Despite the painstaking deliberation taken over the first-year housing survey (how many clothes can I toss on the floor and still qualify as “moderately messy?”),  the perfect roommate can elude us, and many part after two semesters with well wishes, but no intention of renewing the roommate contract.

This was not the case for 2013-ers Nick Gettino, Seth Foster and Nathaniel Lo. Neighbors and roommates on Parrish 3rd as first-years, the friends opted to recreate their freshmen living arrangements as seniors — with some minor adjustments. Gettino and Foster, who shared a double in 2009, now live across the hall in singles, and Lo sits in a position of authority as an RA.Lo believes that proximity may have played a large role in their initial friendship. With interests ranging from rugby to creative writing, the hall mates found common ground in favorite TV shows, video games, and music. “We just really appreciated each other’s different activities… even if we didn’t participate, we still respected them,” he said.
Commonalities increased as the friendship grew. Lo, an engineering and English literature double major, remembers reading Gettino’s poetry over his shoulder long before taking an interest in the English department. “Who knows, maybe that’s part of the reason I got into it.”
The group attempted to block together as sophomores, but the housing lottery ultimately prevailed. Lo wound up on the hall this year after a lucky swap moved him from the fourth floor down to the third.

The rooms look much the same as they did four years ago. Foster is sleeping on the same sheets; Gettino’s rock collection remains on display; and Lo’s Alice in Wonderland and The Hush Sound posters have survived three years of Swat storage. After a visit from fellow-freshmen Parrishers this past weekend, “It really felt like we were back,” Lo said.

“I’m trying not to milk the nostalgia too much though,” he added. “We want this to be a new experience — we’re not trying to recreate an old one.”

Working as an RA definitely changes the nature of the setup. Reprimanding Foster for playing rugby in the hall heralded in the “awkward power dynamic” created when friends are given authority over friends; however, mutual respect will hopefully keep the peace — and quiet — on the Hall of Shakespeare Mad-Libs.
Also returning to the coveted site of their first-year dorm assignments are the seven seniors of Wharton EF 2nd. Although not as intimate as first-year neighbors like Parrish’s trio, common MARACAS groups and dorm-wide study breaks allowed permanent bonds to transcend the staircases: veterans of EF first, second, and third, the seniors now live somewhere in the middle.

While the sheer number of returning hallmates is impressive, their track record lends even more faith to the roommate matching process. Reed Coke bunked with a roommate from his freshmen quad for three years; Lauren Kim’s roommate of two years, whom she met at international student orientation, now lives next door in CD; and the inseparable Benjamin Geselowitz and Richard Chen have lived together for all four years (they are now more distant neighbors — Chen lives one floor down — but often make time to visit).

As in Parrish, some things on EF 2nd remain unchanged by the passing semesters. The lounge, home to a perpetually shirtless basketball player in 2009, is now frequented by Chen, whose chiseled abs rival those of his former upperclassmen neighbors. The room of returning Wharton-er Atish Agarala, visited by a mouse in his sophomore year, is still cluttered. However, with the disappearance of a vibrant group of 2009-ers since their last stay on the hall, the returning blockmates are forced to come to terms with their own aging — despite signs that suggest otherwise — and step up to improve hall life for the dorm’s new occupants.
“We had some really great seniors on our hall freshman year, but we also never saw the faces of a third of the hall,” Geselowitz said.

“We kind of have a PR campaign going… we want them to feel like we can all hang out, that they can get to know us, instead of just being these mysterious, unseen faces,” Jackson Pietsch, formerly of EF 1st, added.

So what is the secret for a miracle roommate match? Pietsch suggests EF’s block is only part of the story. “There’s a lot of us here, but there’s also a lot of people we lived with as freshmen who aren’t living here now,” he said. “It’s like marriage — sometimes it works and sometimes it doesn’t.”