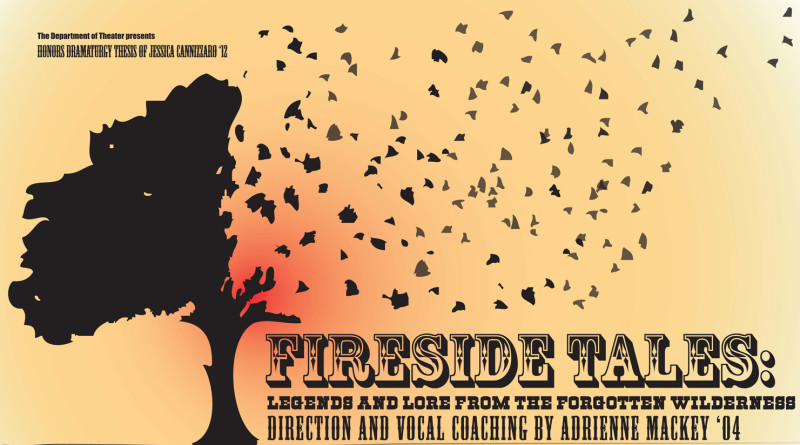 Jessie Cannizzaro ’12 has put a unique twist on traditional storytelling with her Senior Honors Thesis in Production Dramaturgy, Fireside Tales: Legends and Lore from the Forgotten Wilderness. The show represents the culmination of Cannizzaro’s work with director Adrienne Mackey ’04 and Visiting Assistant Theater Professor James Magruder.

Earlier this semester, her cast of seven performed a directed concert reading of the one-act for an audience of individuals affiliated with the Theater Department. This preliminary performance served not only to see her work before an audience but also to solicit questions and feedback to improve the show for the final performances.

Fireside Tales is a compilation of fact and fiction, of the written and spoken word. The show traces a narrative interspersed with tales, songs and anecdotes. It begins as residents of Evanston, IL come together around a book sale at the local library that is about to be torn down. Characters include a nine-year-old girl, a passionate librarian, a homeless writer and a cynical reporter, among others. Each has their own personal connection to the library, and each has a story and different notions of what storytelling and memories mean to them. The reporter is the only one who doesn’t mind the building’s condemnation, and the other characters attempt to persuade her of the library’s significance to the community.

The inspiration for the show stems from the idea of storytelling. “Ever since I was little,” Cannizzaro said, “I’ve been fascinated by storytelling in its most basic form; how we all connect through the stories we share.” She also said she hopes to experiment with the audience-performer relationship, using storytelling and the idea of secrets: “not everyone hears the same story, but everyone leaves hearing a story.”

Cannizzaro has melded folk stories and songs, as well as newspaper articles and statements of actual Evanston residents, to create the show. The play is largely written by Cannizzaro herself, who took inspiration from true stories of libraries closing as well as books by American ethnographers and folklorists, she said. “It was a difficult process to find and dramatize materials, and figure out how something would look if I put it right on stage,” Cannizzaro said. “It took a lot of drafting and writing.” The most difficult part, she said, was figuring out “what I wanted to say… how to frame that idea of storytelling.”

The show incorporates singing and music, adding another dimension to the other ways in which the play’s message is communicated. Cannizzaro said that working with voices and soundscapes has been the most positive aspect of working on the show. “The director [Mackey] is an expert in soundscapes and vocal work,” she said.

Fireside Tales takes the stage May 1st and 2nd at 7 p.m. in the Frear Ensemble Theater.