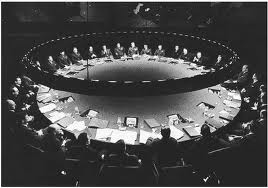 “Partisan rancor,” “incivility of the highest order,” “squabbling children”–these are all phrases used at various points in the past couple of years to describe the general state of affairs in our nation’s capital. Everybody has a different villain to blame for the descent into the unyielding war of words between two seemingly intractable sides. Conservatives will generally point fingers at immoral Bill Clinton, Senate Democrats who filibuster supremely qualified Bush judicial nominees, Nancy Pelosi, or most recently the fascist, socialist, revolutionary Barack Obama. Liberals will point back and pin the blame on Richard Nixon, Lee Atwater of “Willie Horton” fame, Newt Gingrich, George W. Bush, Senate Republicans who filibuster everything under the sun, or the Tea Party.

Centrists in the media, and non-partisan technocrats will point fingers on both sides and blame the entrenched two-party system. They bemoan the partisan squabbling and believe that if only the parties could put aside their petty differences we’d reach the pragmatic, technocratic, correct answers to policy challenges ranging from the national debt to persistent unemployment, from the rise of China to climate change.

To some extend this critique has value. Nary three years ago, the Democratic Party elite embraced a comprehensive policy fix to a long-standing social and economic problem that was conceived by a major conservative think tank and championed by a prominent Republican governor. It’s called the Affordable Care Act and the individual mandate–you might have heard of it.

Followers of the health care reform battle might remember that much of the fierce opposition to the bill came from the same Republican Party that embraced the mandate (and other components of the ACA) not too long ago. When the Republicans in Congress and conservative leaders suddenly found the individual mandate to be the greatest threat to personal liberty since the British raised taxes on the colonists without their consent, it was confusing to say the least.

But recalling something conservative pundit William Kristol wrote back when Bill Clinton tried to implement health care reform, it all makes sense. Kristol advised Republicans to oppose any proposal from Clinton because any improvement in health care that would emerge from the reforms would be credited to Bill Clinton and the Democratic Party, thus hurting the Republicans electorally. Though he wrote this back in 1993, the same logic was applied in 2009 and 2010, and Republicans followed his advice perfectly.

This logic is not only found in the Republican Party. Democrats employed similar tactics in response to President Bush’s efforts to reform Social Security. Led by Nancy Pelosi, they not only opposed President Bush’s specific reforms–they refused to make a counter proposal of their own. They saw an opportunity for electoral advantage by allowing Bush to take all the heat for attempting to change a fundamentally popular system. Although in fairness to the Democrats, they never believed anything was wrong with Social Security and never embraced anything approximating President Bush’s reforms. Republicans really did at one time champion the individual mandate, buy into the consensus that health costs needed to be brought under control and view universal health care as a desirable goal.

Examples like the ACA, and to a lesser extent Bush’s Social Security reform efforts, show the potentially positive sum game of governing through compromise being framed by the inherently zero sum game of elections. In major elections in the United States, no seats are awarded for second place. Losing by a single vote results in the exact same outcome as losing by a thousand, or ten thousand, or a million votes. The loser, no matter how close they come, will not have a formal place in government unless their opponent or some other winning actor benevolently hands them one. Thus the incentives for getting that one extra vote that will put a candidate over the top ratchets higher and higher as the stakes increase with each passing election.

Elections, more than any other factor, dictate what the terms of governing will be, because partisan affiliation is the single most important variable in estimating how a Member of Congress, or a Senator, will vote on any given bill. Elections determine who has the power to make appointments in the executive and judicial branches, and more elections will determine if those appointments will be subject to weak or strong partisan restraints from the Senate.

In such an atmosphere, it is hardly a mystery why we have what has been dubbed “the permanent campaign.” Anything that advantages one party has to hurt the other party electorally. It’s a domestic variation of the relative gains problem that is so prominent in international politics. Parties and candidates obsessively spin which side will get gets more credit for accomplishments or blame for failures, precisely because how credit or blame is distributed is so critical in eking out victory. The lack of bipartisan cooperation and excessive spinning can be hard to stomach, hence the centrist desire for the post-partisan age of technocrats.

So how do we escape from this problem that begets incredible acrimony and get a more civil, cooperative political system? In some ways we can’t. So long as elections remain winner take all, and we maintain a highly polarized two party system, the relative gains problem that drives the permanent campaign will remain in place. Incivility, constant media jousting, and little bipartisan cooperation will be with us for the foreseeable future. The permanent campaign is here to stay.

But this doesn’t mean we should despair. Polarization and permanent campaigning actually increase democratic competition. The contrast between the two parties is stark. Parties are taking clear, coherent stances on more issues. People have more and better information on how to cast their vote or identify with one party or another. While the bickering is ugly, democracy is stronger when people are given a real choice in visions for the country. Two parties cooperating on everything for the sake of cooperation allows no possibility for that choice. The permanent campaign is one critical part in ensuring that choice is real.