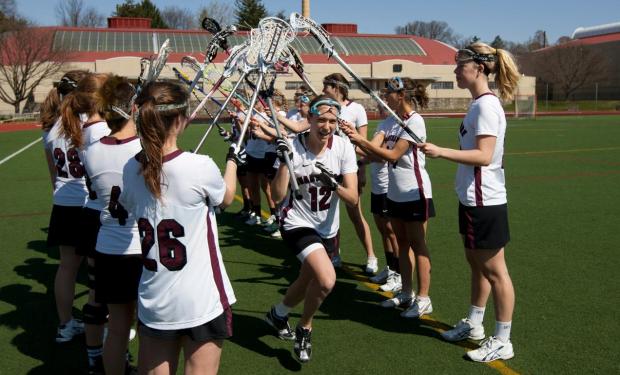 After a bitter loss to Haverford in the final game of the 2011 season that cost the team their first playoff berth since 2007, the Swarthmore women’s lacrosse team is fired up. With the loss of only two seniors and the return of all of their core players, 2012 looks to be an exciting year for the team and a year that carries with it high expectations.

Coach Karen Borbee emphasized that the Garnet hopes to maintain the level of play that the team reached by the end of last season.

“Our expectation is to start where we finished,” Borbee said.

Camilla Seirup ’12 agreed.  “Instead of starting from the beginning, we will be able to start the season at a high level of play. We talked a lot about expectations and are very focused on our end goal – the playoffs,” she said.

The Garnet’s high expectations are certainly merited. Their attack unit was ranked second in the Centennial Conference last year and should only be stronger with the addition of a deep freshman class.

Annelise Mowry ’12 (18 goals, 2 assists) and Marie Mutryn ’12 (36 goals, 13 assists) are the solid offensive foundation and are expected to provide leadership even as they continue to recover from injury.

“Both of them hope to be playing after spring break,” Borbee said. “Before our Conference schedule kicks in, they should be back on the field.”

In addition to the senior attackers, Annalise Penikis ’13 (63 goals, 37 assists), who was named to the Centennial Conference First Team and the IWLCA’s All-Metro Region First Team in 2011, returns to anchor the offense. Corinne Sommi ’14 (37 goals, 23 assists) is also expected to be a solid contributor.

Borbee also hopes that Lucy Whitacre ’14 and Emma Sipperly ’14, who saw significant playing time last year, will give a boost to the offense.

According to Borbee, Sarah Lentricchia ’15 and Elyse Tierney ’15, who was also a consistent contributor for the women’s soccer team, will see time in the midfield.

Already, the team’s cohesion is apparent. This is due in large part to the seniors’ leadership and the effort that the team has put in during preseason.

“Everyone has been playing great together. This year has been different because we haven’t had to start from the beginning,” Mowry said. “It shows how well the players have been able to mesh together and build off of each other.”

On the defensive side, Maddie Williams ’12 (38 ground balls, 24 draw controls), who has earned a spot on the All Centennial Conference Second Team for the past two seasons, Seirup (17 ground balls, eight caused turnovers) and Caroline Murphy ’14 (37 ground balls) will be three of the essential contributors on defense.

Seirup is also returning from an injury, but should be in top form in a matter of weeks.

Borbee acknowledges that the seniors’ successful transition back onto the field is crucial to 2012 success.

“The big thing is going to be when the seniors come back,” Borbee said. “[We will be] trying to see how the younger players fit in when the older players come back. There’s going to be a lot of transition during the first third of the season.”

With the absence of several key seniors, Borbee is excited about the freshman class which will be expected to make an immediate impact.

“We have some good new players who are going to help us right away. They’re going to have to learn on the go so that when the more experienced players come back we can see where they will fit in on the team,” Borbee noted. “They are all great additions to the program and it’s a good, balanced class.”

Another new addition to the team is back-up goalkeeper senior Hilary Santana, who had a stand-out volleyball career at the College. She will be play behind returning starter Michelle Ammerman ’14 (100 saves, 15 starts) who continues to improve after a strong freshman campaign.

The team also added a new coach, Kathy Krannebitter, who brings a wealth of experience to the team.

“It’s nice to have another coach this year, especially one who can devote a lot of attention to the goalies,” Mowry said. “She also helps motivate us.”

The team is looking forward to its spring break trip, during which it will face Marymount (VA) and Elizabethtown, ranked No. 20 in the IWLCA pre-season poll.

“We are really looking forward to spring break. It’s a nice time to bring the team together and face some tough competition,” Seirup said.

Senior Marie Mutryn is also excited for the team’s potential this season.

“Spring break will be an excellent opportunity for us,” Mutryn said. “It will be a good challenge for the team and hopefully a way for us to keep the positive momentum going.”

The women have added motivation this year. In the preseason Centennial Conference poll, the Centennial coaches picked the Garnet to finish ninth out of ten teams despite having a 9-7 record last season and missing out on the Conference playoffs on the final day of the season.

The Centennial Conference is consistently one of the top women’s lacrosse conferences in Division III.  Gettysburg (No. 1), Franklin & Marshall (No. 6) and Dickinson (No. 19) were all ranked in the IWLCA preseason poll.

“It’s great that they are underestimating us,” Mowry said. “The coaches are pushing us much harder this year and I don’t think people realize how different our team is.”

0 thoughts on “2012 Women’s Lacrosse Preview: Taking the Next Step”