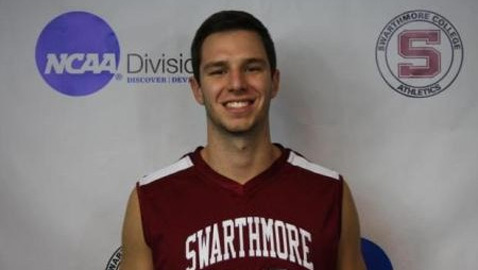 It’s been a tough season for the Swarthmore College men’s basketball team.  A vicious combination of injuries, bad luck and an unexpected coaching change has seen the Garnet sputter leaving the team with a dismal 1-20 record after last Saturday’s 73-56 loss to Conference foe Johns Hopkins.

One of the few bright spots for interim head coach Joe Culley’s embattled team has been the emergence of guard Mike Giannangeli ’12.  Despite a relatively successful freshman campaign, Giannangeli generally struggled to find consistent minutes during his first three years on the team and coming in to his senior season he had totaled just seven starts.  Having averaged less than five minutes a game during that span, he had spent most of his time in a Garnet jersey riding the bench.

This season, however, Giannangeli has become a key member of the team’s rotation, averaging 6.3 points per game, the fourth best figure on the team, and shooting nearly 40% from three point range.  He’s started 17 games, is averaging nearly 27 minutes played per contest, and has solidified himself as the team’s premier perimeter defender.

It’s in this role as a defensive stopper that Giannangeli has really thrived this season. According to Coach Culley, “He’s our best defender; he gets the other team’s best player every night unless it’s a big man.”  While his work on the defensive end rarely shows up in the box score, his overall contributions are not lost on his coaches and teammates.

“Mike is a very unselfish player, who will often look to pass before he takes a shot,” co-captain Marc Rogalski ’12 said.  “He’s been a great contributor offensively and defensively for our team this year.”

This selfless play and competitive attitude has been important for a struggling Garnet ballclub.  “I’m just trying to do whatever I can to help the team win, unfortunately it has not been displayed in the win column, but I’m trying to bring the energy every game, motivate my teammates and do little things to help my team win that might not show up on the stat sheet,” Giannangeli said.

When interim head coach Culley took control of the team seven games into the current season, one of the first things he did was to name Giannangeli captain along with Rogalski.

“Mike’s a terrific young man of great character, he’s a very good captain, a really good leader, which is tough to do sometimes when your record isn’t very good,” said Culley.

Despite the frustrating string of losses, Giannangeli has tried to remain positive and put forth maximum effort every game.  “It finally clicked that this was it for my basketball career, [it’s] kind of now or never,” he said.

After missing all of preseason and about a third of his junior season due to a semester abroad in Rome, Giannangeli admits that last campaign was “kind of a wash,” but credits the experience of his time overseas with helping him grow as a person.

This newfound maturity seems to be serving him well in this, his senior season.  “In terms of actual talent and basketball ability, I don’t think I’ve really changed much over the last few years; it’s more that I’ve just become a lot more confident and experienced,” he said.

Culley notes that Giannangeli has worked hard on and off the court, but generally agrees that his breakout this year is primarily “a matter of opportunity and confidence” rather than a sudden change in his skill set or ability.

“Mike got his chance, performed well, and never looked back,” said Rogalski.

The results this season have not been easy to deal with and really put a damper on the individual successes of Giannangeli and his teammates.  “Losing really wears on me,” Giannangeli concedes.  “It’s been very frustrating”.

With four games remaining on their schedule, and no chance of making the playoffs, the Garnet still hopes to salvage some measure of success from this trying season.  “The playoffs aren’t going to happen,” Giannangeli said, “but we still have a chance to beat Haverford […] and that would be a great way to finish up my career here at Swarthmore.”