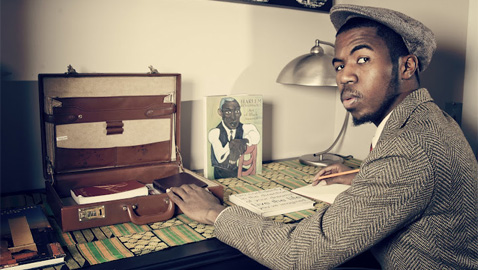 The night began with readings by members of O.A.S.I.S., the spoken word student group on campus. Sean Bryant ’13 read his “Letter to MJ,” a poem personifying Michael Jordan’s jersey writing a love letter to Michael Jordan. Bryant was followed by Yena Purmasir ’14 performing her poem, “The Lifeguard.” Sasha Wijeyeratne ’12 presented a powerful piece about identity, and Joshua Bennett compared her work to that of Judith Butler. By changing her appearance throughout her reading, she made the audience aware of how they immediately form a mental decision about a person based on how they look and the clothes they wear. “I will not be your learning moment,” she told the audience. Elizabeth Johnson ’15, who is new to O.A.S.I.S., gave a funny yet moving performance about Facebook and social networking. Next, Haydil Henriques ’14, an executive member of O.A.S.I.S., performed her poem “10 Things I Want to Say to Men of Color,” which was inspired by Joshua Bennett’s “10 Things I Want to Say to a Black Woman.”

“The night was also really special for myself, the poets, and the other performers. It was a magical moment we all shared with Joshua being a part of such an intimate and emotional setting and performance. I will never forget the feeling of sitting and watching the night go on, thinking to myself, and saying ‘I wouldn’t want to be at any other place but Swarthmore tonight,’” said Sean Bryant ’13, a founding member of O.A.S.I.S.

Bennett, an award winning poet from Yonkers, New York, uses the strength of his voice, gestures, and his whole body to bring alive the powerful images his words invoke. He plays around with the conventions and clichés of the English language, with lines like “I have always been told that the eyes are the windows to the soul, but maybe your soul is a window for our eyes.” Between performances of his most well known poems, such as “10 Things I Want to Say to a Black Woman” and “Dear Stevie,” Bennett connected with the audience on a personal level, telling jokes and anecdotes.

His autobiographical poems, which he says “are all basically love poems for [him],” cover a broad range of topics from Stevie Wonder to his veteran father to love rejected, causing the audience to feel a wide range of emotions over the relatively short show.

“His final poem, ‘Levi,’ was one of the most beautiful pieces I have ever heard. As someone who hopes to go into teaching children — to inspiring creativity and helping every child realize all the amazing things they have to offer the world — this poem said so many things that I feel… Education doesn’t have to be an asylum, all children don’t have to come off an assembly line. Every child has a contribution to make, a beautiful impression to leave on the world,” said Corey Carmichael ’14.

Bennett recently released his first book of poetry, Jesus Riding Shotgun, and has also performed at the White House, the Sundance Film Festival, and the NAACP Image Awards. A 2010 graduate of the University of Pennsylvania, Joshua was awarded a Marshall Scholarship to earn a Master of Arts in Theatre and Performance Studies from the University of Warwick, and he is currently pursuing a PhD in English from Princeton University.

Other events planned in honor of Black History Month include “Soul Shack,” an open mic night in the Black Cultural Center on Thursday, February 9th from 7:00 to 9:00 p.m.; a screening of The Black Power Mixtape on Friday, February 10th at 8:00 p.m.; and the annual Tri-College Black Love Semi-Formal banquet on the 10th beginning at 6:00 p.m. View Swarthmore’s Black History Month Calendar for more information on this month’s events.